Geology is the study of planet Earth. Thus, by its very nature, Geology is an expansive scientific field which encompasses a wide range of interdependent sub-disciplines. Scientists working within these geological disciplines explore changes in Earth systems, such as the solid earth, life, oceans and climate, viewed in the framework of an estimated 4 567 million years of geological time. Geology further encompasses exploration for natural resources and both prediction and mitigation of natural disasters. In other words, geologists seek to further our understanding of the processes which are shaping planet Earth.

Waldemar Christofer Brögger founded the geological-mineralogical department at the university, in the autumn of 1881.

The following discussion illustrates that both the research focus and the name of the geological department/s at Stockholms högskola and Stockholms universitet has paralleled closely the installation of new chair professors. The most obvious example is the foundation of a separate Department of Quaternary Geology*  in 1954. Since 1984, geological sciences at Stockholms universitet have been represented by three research training programs. These have, however, changed both focus and name as each new chair professor was installed.

*The geological term Quaternary was introduced by Giovanni Arduino in 1760 to describe the unconsolidated sediment deposits on the Po plain (Bernoulli and Jenkyns, Sedimentology 2009, doi: 10.1111/j.1365-3091.2008.01017.x). The Quaternary is now ranked as a geological period.

From Geology and Mineralogy in 1881 to Marine Geology in 2010

In a document about research in the biological and geological sciences at Stockholms universitet from 1972, Ivar Hessland described Brögger as follows (translated from Swedish): "From nothing and in a short time, he created, in Stockholm, a fresh and modern centre for research and education, to which young geologists from all of the Nordic countries gathered. Among these are many of the key figures in Nordic geology."  Frans Erik Wickman expressed a similar view, highlighting Brögger’s nine years in Stockholm as "A seminal period of Nordic geology" (Bulletin of the Geological Society of Finland, v. 58, 1986).

Waldemar Christofer Brögger remained in Stockholm until 1890, when he was offered a professorship at the University of Kristiana (Oslo). In 1890, he expressed his longing to return to Norway in 1890 (translated from Norwegian) as follows: "Here, I cannot bear to stay forever; I miss home."   Much later, in a letter to Percy Quensel, written in 1934, he states (translated from Norwegian): "I always remember my Stockholm years as my happiest years."  (Geir Hestmark: "Vitenskap og nasjon, Waldemar Christopher Brøgger 1851–1905", Aschehoug, 1999).

For economic reasons, Brögger's Chair was not filled during the period 1890–1895. The geological disciplines were nevertheless carried forwards by Arvid G. Högbom who was installed as professor in 1896. During the same year, Högbom moved to Uppsala, where he held a professorship until 1922. In Stockholm, Högbom’s successor, from 1897 to 1924, was Gerard De Geer. He was also the Vice Chancellor of Stockholms högskola from 1902 to 1910. Two of the five lecture theatres in the Geoscience buildings are named after Högbom and De Geer.

De Geer instigated the research training program Geology. His successor for a short period (1925–1926) was Johan Gunnar Andersson ("China-Gunnar"), before Lennart von Post took over as program leader for Geology beginning in 1929 and until his death in January 1951. Collectively and over a period of more than half a century (1897–1951) De Geer and von Post created a department which almost exclusively focused on Quaternary Geology.

The research training program Geology was renamed General and Historical Geology when Lennart von Post’s successor, Ivar Hessland, was installed as professor in 1953. Quaternary Geology was initially encompassed within this program, but already in 1954, Hessland had established Quaternary Geology (with an applied focus) as a separate research program with its own premises. Carl-Gösta Wenner was the first leader of this program.

General and Historical Geology switched focus towards Northern Europe’s continental bedrock and impact structures when Maurits Lindström was installed as professor in 1984. The focus of this program returned to Marine Geology when Jan Backman was installed as professor in 1997, with his interest for ocean drilling and paleoceanography. The name of this program was changed to Marine Geology in 2010 to reflect this profile, which has its origins in 1953. Jan Backman is probably the last of this lineage of professors which can be traced back to Waldemar Christofer Brögger, Stockholm högskolas second professor.

With Barbara Wohlfarth joining the Department in 2007, the Marine Geology program was broadened so as to include lacustrine environments. 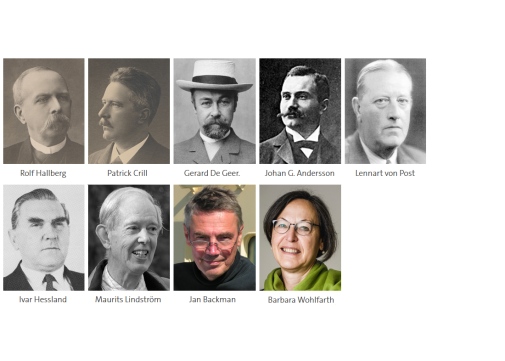 From Mineralogy and Petrography in 1909 to Geology in 2005

This name was changed to Mineralogy, Petrology and Geochemistry in connection with the installation of Frans Erik Wickman as Sven Gavelin’s successor, in 1974. During his relatively short time as professor (1974–1980) Frans Erik Wickman was also the President of the Royal Swedish Academy of Sciences during the period 1976–1979. Wickman’s successor, Kurt Boström was installed in 1981. Boström was known for his early usage of geochemistry in connection with the geology’s paradigm shift (plate tectonics). He considered mineralogy well-represented at the Swedish Museum of Natural History and therefore renamed his program to Geochemistry and Petrology in 1989. At this stage, two of the Department’s three programs focused on geochemical disciplines.

Kurt Boström’s former research student, Johan Ingri became the next Professor of Geochemistry and Petrology in 1998. After two years in Stockholm, Johan Ingri returned to Luleå. Both Kurt Boström and Johan Ingri were primarily interested in low temperature geochemistry. A young Scot, Alasdair Skelton, was Ingri’s successor in 2001. Alasdair Skelton’s interest for mineralogy, petrology and tectonics led to a redirectioning towards classical geology. The program was therefore renamed Geology in 2005. This re-established a discipline that had been part of the Department between 1909 and 1951, albeit with a different focus amongst the breadth of the geological disciplines. 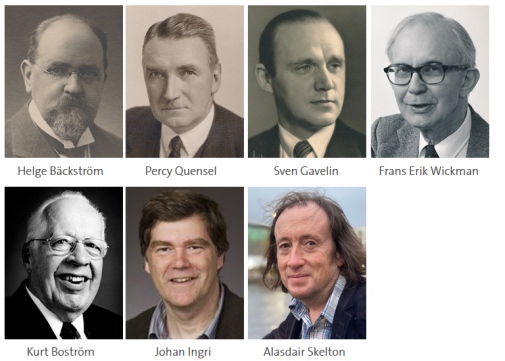 Ivar Hessland’s perspective on the importance of marine sedimentology and sediment geochemistry created an opportunity for his former research student, Rolf Hallberg to establish a new research field in Stockholm which stemmed from this area. In 1984, Rolf Hallberg was installed as professor in the newly-established discipline of Microbial Geochemistry. In connection with the name change to the Department of Geology and Geochemistry in 1989, Rolf Hallberg renamed his program Biogeochemistry. Hallberg’s successor was Patrick Crill who was previously at the University of New Hampshire. Patrick Crill’s research focuses on trace gas (methane, carbon dioxide, hydrogen, nitrogen) exchange between the atmosphere and the biosphere, organic geochemistry and geomicrobiology. In 2005, he broadened the name of his program to Geochemistry.

The professor reform of January 1999 opened a new opportunity for permanently employed lecturers to be promoted to professors. During the first decade of the new millenium, six of the Department’s lecturers were promoted to professor: Nils Holm (2000) in Marine Sediment Geochemistry, Peter Torssander (2001) in Isotope Geochemistry, Martin Jakobsson (2009) in Marine Geology and Geophysics, Carl-Magnus Mörth (2010) in Environmental Geochemistry, Sandra Piazolo (2010) in Structural Geology and Tectonics, and Victoria Pease (2010) in Tectonics and Magmatism. 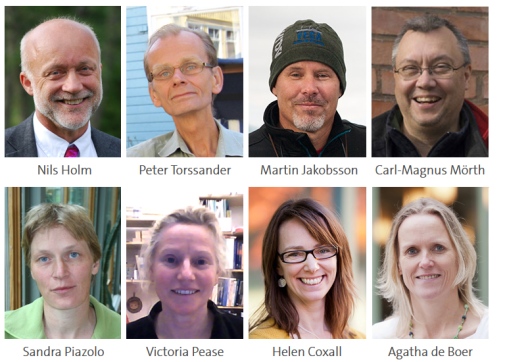 Each of the aforementioned persons at Stockholms högskola and Stockholms universitet has contributed to the geological disciplines both in Sweden and abroad. Some take their place among the forefront figures of geology.

It is not claimed that the above text is a complete record. Its aim is more so to provide an overview of the history of the Department from 1881 until today, its past names, its research training programs and its professors.

Providing a picture of the Department’s diversified history has become more important given ongoing internationalisation; the proportion of lecturers/researchers coming from abroad has risen from 12% in 1999 to 61% in 2012.

Teresa Matus and Helen Gerhardsson at the Stockholm University Central Archive are thanked for assistance with finding historical records. Inês Jakobsson is thanked for graphic design of the Department’s history. Martin Jakobsson, Carl-Magnus Mörth and Alasdair Skelton read and commented on previous versions of this text. The original text in Swedish was written by Jan Backman. The text was translated to English by Alasdair Skelton.