When the new campus at Frescati was created in the late 1970s, the artistic decoration of the buildings and campus was an obvious feature. Art also played an important role for the newly founded Stockholm University College in the 1880s, when a donation enabled the first art history professorship in Sweden and thus studies in art history.

Stockholm University's art collections have a large range, with art of many different techniques, and span a long period of time. From the very oldest donated works of art in Spökslottet to contemporary public works placed on the University campus.

Since the 1880s, art has played an important role for the then newly founded Stockholm University College. The first art history chair in Sweden was made possible after a donation by the couple Johan Adolf and Helen Berg in 1883. The following year, J.A. Berg donated 210 older works of art to the university to be used in teaching, which became the basis for today's art collection.

When the new campus at Frescati was created in the late 1970s, the artistic decoration of the buildings and campus was an obvious feature. To the new modernist building design, new works of art were added that would interact and create a harmony with the architecture. The art was developed with the aim of both enriching and illuminating the public space.

The works of art reflect Stockholm University's principle of being a place where free-thinking and expression are emphasized and respected at the same time as it opens up for a constructive questioning of previous ideas and norms. Art strengthens creative and critical thinking, which is central to the entire university's area of ​​activity.

Stockholm University's collection consists of over 4,000 works of art, most of which are in the Frescati area, but also on the university's other campus areas. Today, the university's departments also include premises in Albano and AlbaNova, Kista, Garnisonen and more, and all campuses have art collections.

The collection has a wide range, with art from many different techniques and spans a long period of time. From the very oldest works of art from the 14th century at Spökslottet, to recently placed contemporary works of art on the university campus from the Swedish Arts Council. In addition to these works, there are also several public works of art and building decorations from Akademiska Hus on the various campus areas.

Spökslottet (or “Scheffler Palace”) is a treasure trove for anyone interested in art and history. The building dates from the early 1700s and the collection contains paintings from the 1400s to the 1800s as well as Orrefors art glass. Most of the old master paintings were donated to Stockholm University College in 1884 from the Johan Adolf Berg Foundation, which Stockholm University administers.

Was "The Assault" painted in Bruegel's studio?

When the painting "The Assault" – a central work in Stockholm University's art collection – was examined to see if it was by Flemish Renaissance painter Pieter Bruegel the Elder, or by his son Pieter Brueghel the Younger, students studying the International Master's Programme in Art History: Technical Art History and the Art Museum, at Stockholm University took part in the examination for educational purposes.

The painting was donated to the University in 1884 and the work was at that time signed by Pieter Breughel the Younger, 1630. In the 1970s, however, another signature was found underneath which indicated that it was by Bruegel the Elder, and dated 1567.

This film explores the truth behind the painting "The Assault", part of Stockholm University's extensive art collection.

Stockholm University is located in the middle of the world's first national city park and is characterized by beautiful nature, unique architecture and art. The sculptures on the university campus are accessible to the public and in their entirety create an extensive sculpture park. 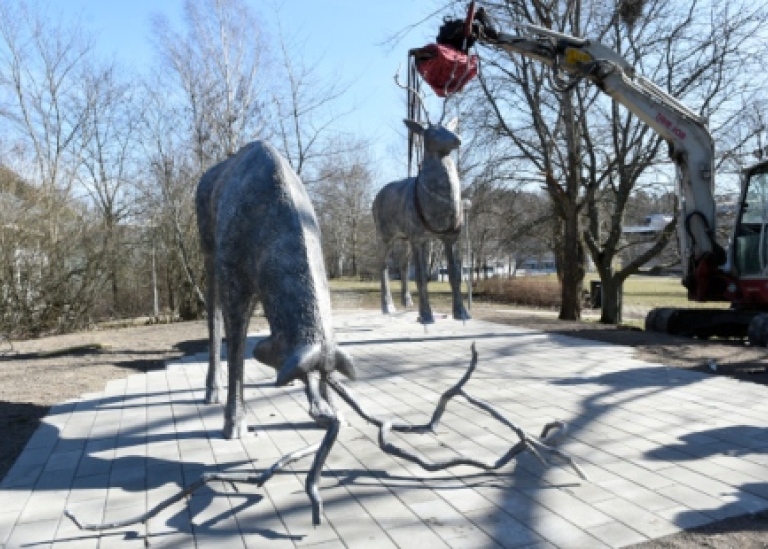 Installation of The Savages in 2019. Photo: Ingmarie Andersson

One of all the works of art on campus, in the form of two large deer-like creatures in aluminum, is located just outside the Arrhenius Laboratory. The artwork, called Vildarna (The Savages), created by the artist Linda Shamma, has been funded by the Swedish Arts Council and put in place in collaboration between Akademiska Hus and Stockholm University.

Accelerator is an exhibition space where art, science and societal issues meet. It is part of Stockholm University with the mission to engage actively with society, producing exhibitions presenting international and Swedish contemporary art.

Accelerator organises a public program of presentations and talks with artists, researchers, students and the general public. Accelerator’s programme is driven by an ambition to contribute towards a transparent and empathetic society by opening up opportunities for art to spark discussions and interdisciplinary dialogue.

For more information about art at the university, including requests for guided tours, please contact Curator Dr. Camilla Hjelm, camilla.hjelm@su.se