60 years as a university 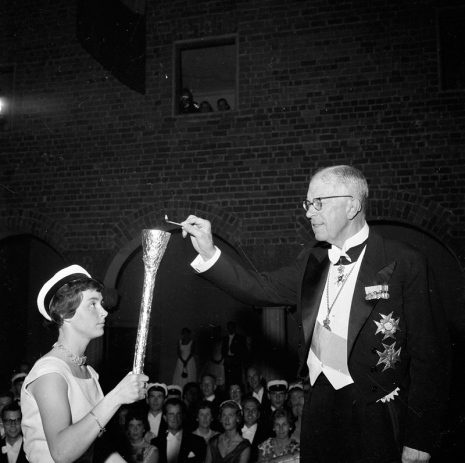 The king lights a torch which is carried onward by students and track and field star Inga Broberg.Photo: John Kjellström, Stockholm City Museum

Stockholm University College started in 1878, born of a Stockholm city initiative. Engaged citizens formed the College Union. At the beginning they rented locations and the lectures were exclusively on natural science. The college’s first professor was hired in the 1880s, but it wasn’t until 1904 that the college could grant degrees and doctorates. Kungstensgatan 45 became the first official locale and, in the first decade of 1900, several locations around Observatory Hill, near the current location of the main Stockholm Public Library, were also used.

By the end of the 1940s, there was a simmering discussion about developing Stockholm University College into a university. The college’s finances, with income from charity funds, were not keeping pace with the increasing number of students. Student numbers went from 50 in the early 1900s, to 3000 in 1950, to 8000 in 1960. Letting the state take over responsibility for the college was seen as the only way that it could continue to grow. Opponents to public funding pointed to academic freedom and independence which could be diminished if the state controlled research and education.

The parliament made Stockholm University College public in 1959 and granted it university status. Stockholm University was established 1 July 1960. The ceremonial inauguration was held at Stockholm City Hall on 3 September 1960. There were 700 guests, including King Gustav VI Adolf, and a newly composed cantata was performed.

An expansive and turbulent time

The 1960s saw a major expansion of higher education. The baby boom after World War II, the increase in high schools, a newly established, public system for monetarily supporting students, and economic growth increased the demand for higher education. Additionally, a national campaign modernised research with a new research council and created new professorships. Umeå University was also founded in 1965.

The government’s ambition was that university education would be tightly bound to the labour market, and that research should directly improve society. However, Stockholm University cautioned against an overly strong link between work life and studies and instead advocated for a more flexible shaping of educational paths. The 1960s was a turbulent time in higher education, with a student population in flux, political educational reforms, student protests and the occupation of Stockholm’s Student Union in 1968.
As Stockholm University grew so did its need for larger and more spacious locales. In 1971, the move from the inner city to the newly built Södra huset at Frescati began.