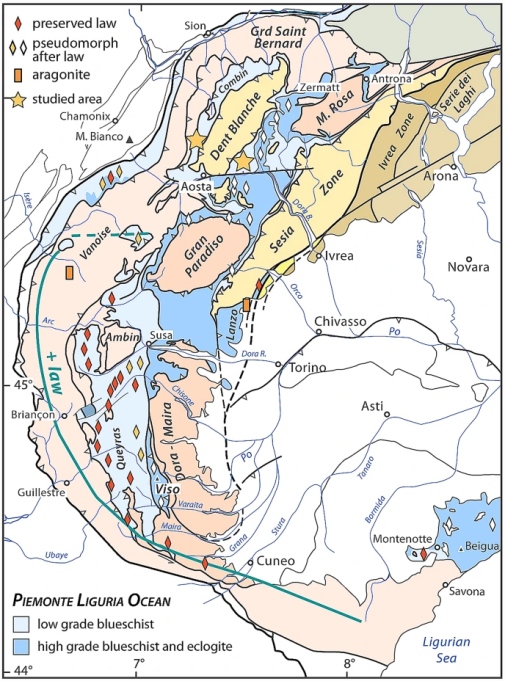 Simplified geological map of the Western Alps, redrawn after the Structural Model of Italy (Bigi et al. 1983) displaying the occurrences of preserved (red symbols) and pseudomorphed (yellow and white symbols, in low-grade blueschists and high-grade blueschists and eclogites, respectively) lawsonite within the Piemonte-Liguria Ocean (Bearth 1966; Bocquet 1971, 1974; Goffé and Chopin 1986; Bousquet et al. 2004). Note the lack of reported lawsonite in the Combin Zone, north of the Aosta Fault. The yellow stars indicate the location of the studied areas. Note also that only two occurrences of metamorphic aragonite are reported in the Western Alps, in the Mesozoic sedimentary cover of the Briançonnais basement in the Vanoise area (Gillet and Goffé 1988) and in the Lanzo Massif (Vitale Brovarone et al. 2017; Giuntoli et al. 2020).

Abstract: We report the first findings of several occurrences of lawsonite and metamorphic aragonite in the meta-sediments from the Combin Zone (Piemonte–Liguria ocean, Western Alps), where the early blueschist-facies episode is poorly documented. New field and metamorphic data (thermodynamic modelling and Raman spectroscopy on carbonaceous material) are used to elucidate the P–T evolution and fluid composition of the Combin Zone and investigate the lawsonite growth and breakdown reactions. Two tectonometamorphic units have been identified within the Combin Zone with distinct geometry, lithological content and P–T conditions. In the higher grade unit, metamorphic aragonite occurs as inclusions in titanite. Lawsonite and garnet were stable at peak P–T conditions (~ 16–17 kbar and 460–480 °C) at very low X(CO2) values. Lawsonite is systematically pseudomorphed, but preserves hourglass zoning or internal fabric associated with the prograde ductile deformation. The lower grade unit (~ 8 ± 1 kbar ~ 370–400 °C) is discontinuously exposed along the western base of the continental Dent Blanche nappe and records P–T conditions similar to those recorded by the Dent Blanche nappe. A metamorphic discontinuity is, therefore, documented between the largest part of the Combin Zone on the one hand, and the Dent Blanche nappe on the other hand. The discovery of lawsonite and metamorphic aragonite allows a better understanding of the large-scale metamorphic structure of the Western Alps.