The fourth of October is Cinnamon Bun Day - Kanelbullens dag! In bakeries and convenience stores all over Sweden you will find baskets of warm cinnamon buns, or kanelbullar, as these tasty swirls of pastry are called in Swedish. 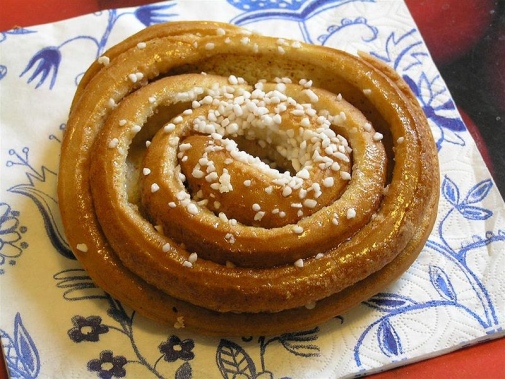 Cinnamon buns are an almost daily feature of Swedish life, but the 4th of October, is their special day. Celebrating Kanelbullens dag is relatively new – though it fits in perfectly with Swedish culture and tradition: there are a number of other days in which pastries play a significant roll, such as Fettisdagen (Fat Tuesday) when the nation eats semla.

Cinnamon Bun Day was established in 1999 when staff at Sweden's Hembakningsrådet ('Home Baking Council') were looking for a way to celebrate their fortieth anniversary.

The idea behind the creation of the day was to celebrate Sweden's home baking tradition by highlighting a traditional and much-loved pastry. The autumn harvest is high season for baking in Swedish homes, so it was an ideal time of the year for a festive day with a baking theme.

Finally, very much in keeping with Swedish culture, it was considered important that the tradition should be something that everyone can participate in – a goal which has easily been reached: go into any bakery in Sweden today and you will find Cinnamon rolls in abundance!

Read more about cinnamon buns and how to make them at Sweden.se.