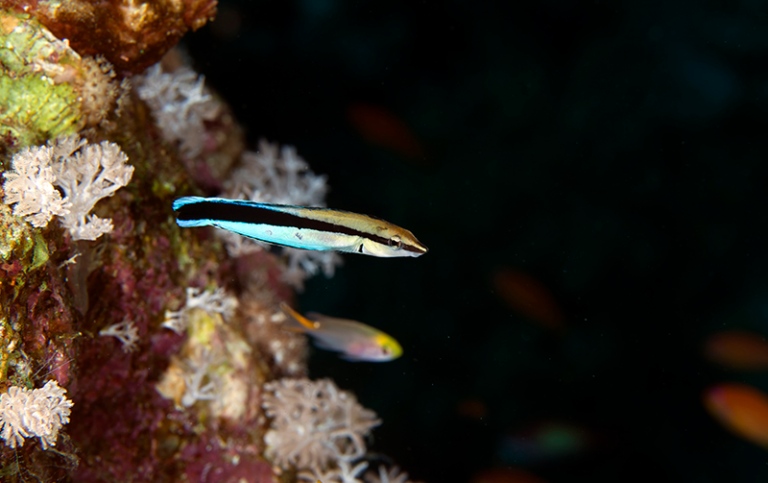 The cognitive abilities of females are often dissimilar to those of males. For example, male rats excel in spatial navigation compared to females, whereas in cowbirds, females have better spatial skills. A recent study by Zegni Triki, Department of Zoology, Stockholm University, and Redouan Bshary, Institute of biology, University of Neuchatel, Switzerland, shows that in the sex-changing species cleaner fish (Labroides dimidiatus) males and females have different cognitive abilities. The study is published in the scientific journal Royal Society Open Science.

“Although sex-changer hermaphrodites are widespread in the animal kingdom, the evidence we have on sex differences emerge from studies on non-sex-changer species. There is no documentation of whether sex differences in their cognitive abilities exist”, says Zegni Triki, Department of Zoology, Stockholm University.
“To our knowledge, the findings provide the first evidence of sex-related variation in the cognitive abilities of a protogynous species”, says Redouan Bshary, University of Neuchatel, Switzerland.

Differences in self-control and learning abilities

The cleaner fish (Labroides dimidiatus) is an Indo-Pacific fish and have a sequential hermaphrodite protogynous lifestyle. In other words, all individuals start their lives as females and later change sex to become male. Cleaner fish live in haremic groups governed by social hierarchy strongly linked to the body size of the group members. A harem is often composed of one large dominant male and several small females. For a female to become a male, it needs to become the largest fish in the harem.

The findings show that females had better self-control than males, while males were better learners. Learning consisted of successfully associating a cue (colour and/or shape) to food reward. Self-control, on the other hand, consisted of inhibiting impulses in a classic detour test. This task employed a food reward visible behind a transparent barrier. Fish with self-control inhibited their motor impulses to swim straight towards the reward and subsequently hit the transparent barrier but instead moved away from the goal to reach it ultimately.

“This research can be viewed as the first step to unravel what is causing such differences in the cognitive abilities of individuals that once live as females and later on live as males with a dramatic shift in their priorities and life strategies”, says Zegni Triki.
“Protogynous sequential hermaphrodism increases males’ fitness where it maximises their reproductive success first as females and later as males. Although there is a link between such increased fitness and improved learning abilities, we do not know if it is causal or due to indirect relationships. In sum, sequential hermaphrodite systems are highly suitable to study how sexual selection pressures can shape cognitive abilities within lifetime.”

“Sex differences in the cognitive abilities of a sex-changing fish species Labroides dimidiatus” was published in Royal Society Open Science on 14 July.
royalsocietypublishing.org/doi/10.1098/rsos.210239