A Gömböc has been handed over to SULaw by the Hungarian Ambassador. It is the first individual Gömböc that has been installed in Sweden and at a legal institution.

The Hungarian ambassador, cultural attaché Vand head of the Department of Law

The individually produced Gömböc models have been donated as permanent installations at prestigious universities and cultural centers around the world. They are for example found at Harvard, Oxford and Princeton University, among others (see a world map of where the individual models have been placed here). The Gömböc that SULaw received has been donated by Mr Ottó Albrecht.

The individual models, which differ in size and manufacturing materials, are personally named with a specific year that is in strong relation to its recipient - usually the year when the department was founded or when a building of importance to the department was built.

The Gömböc donated to SULaw is marked 1878, which is the year the university was founded as Stockholms högskola. It was handed over on 19 May 2021 during a meeting with the Hungarian Ambassador and the Embassy's Cultural Attaché. A larger formal ceremony will take place when the pandemic situation allows, hopefully in September this year.

A Gömböc is officially defined as a convex mono-monostatic body with homogeneous density. Its existence was conjectured in 1995 by the renowned Russian mathematician Vladimir Arnold and then the Gömböc took its physical form through the work of Gábor Domokos, director of the Morphodynamics Research Group at the Hungarian Academy of Sciences and the Technical University of Budapest and co-founder of Gömböc Ltd, and Péter Várkonyi, professor at the same university.

The fact that Gömböc is a mathematical model means that it has traditionally been given to the Department of Mathematics at each university. Eleonora Rosati, professor of intellectual property law at Stockholm Univesity (who wrote the article The non-systematic relevance of earlier IP rights: from Gömböc to Brompton Bicycle) explains that Gömböc has also become highly relevant from a legal perspective:

” The Law Department at Stockholm University is the first law department in the world to be presented with its own Gömböc: this shows that the Gömböc is not only of great relevance to the world of sciences and mathematics, but has also gained a key place in the legal field, notably that of intellectual property law.
The dispute concerning the registrability of the shape of the Gömböc as a trade mark has given rise to one of the most significant and far-reaching recent decisions of the Court of Justice of the European Union in the field of trade mark law. I am personally honoured and proud that, thanks to the generosity of Mr Gabor Domokos and Mr Otto Albrecht, Stockholm University now holds a piece of intellectual property law history!” 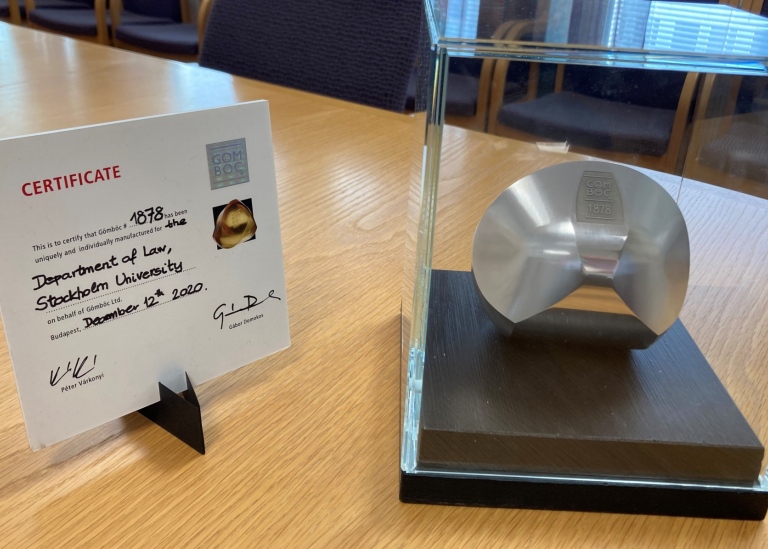 Gömböc 1878 has been donated to the Department of Law at Stockholm University by Mr Ottó Albrecht and will be placed as a permanent installation in the faculty room.