How is ”refugeeness” constructed in Swedish newspapers – and are counter-images possible?

In Swedish newspapers, people fleeing are often depicted as victims or as a security threat to the Swedish nation state, a new PhD thesis in sociology shows. As a reaction to this visual framing limited to stereotypes, the author Jelena Jovičić participated in a project where people with experiences of flight created their own counter-images. Here is what she found out. 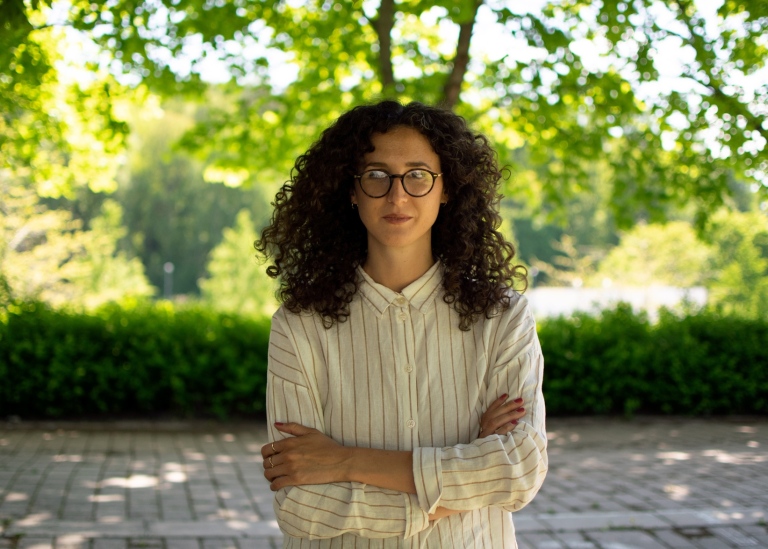 In her PhD thesis On the Visual (Re)production of ‘Refugeeness’: Images, production sites and oppositional gazes, Jelena Jovičić studied how people fleeing were portrayed in Swedish newspapers during the so-called refugee crisis in 2015-2016. The two biggest morning newspapers in Sweden, Dagens Nyheter and Svenska Dagbladet where examined. In line with previous research, she found that four so called visual frames where the most dominant: victimization, securitization, reception and humanization of refugees.

– The most common theme is this victimization framing of people fleeing, it counts over 40 per cent of photographic depictions of refugees in Swedish newspapers. Within this visual frame people fleeing are dominantly captured as vulnerable victims, says Jelena Jovičić, newly appointed PhD in sociology.

Often, these pictures use symbols of precarity and hunger, like children holding pieces of bread or empty cups, and are meant to evoke feelings of fear and sadness. Children are the most common depiction in this visual frame, especially in pictures with mothers holding children that resemble the iconic Madonna and Child.

– There are also many cases of what I call the “Male Madonna”, men holding children, in the victimization frame, says Jelena Jovičić.
But men and women are portrayed differently in this type of framing. Men are portrayed in an active state while they are walking around, boarding trains, or holding children high up in celebration of reaching European shores. Women, on the other hand, are captured in a more passive state while sitting, hugging or playing with children.

– In this way, the iconic meaning embedded in these pictures reproduce gendered stereotypes. Women are represented as passive, weak and voiceless, while men are seen as active, strong and protective, says Jelena Jovičić.
Another dominant theme was securitization, described in the thesis by Jelena Jovičić as “de-individualized depictions of people threatening the nation state” – pictures of groups of people fleeing outdoors in public spaces or in the fields.
– Different visual frames were represented depending on where the pictures of people fleeing where taken. Most images belonging to the securitization frame were shot outside of Sweden, especially during 2015. But after the Swedish border closed in 2016, this frame became the dominant frame inside Swedish national borders too, she says.

The reception frame, best illustrated through images of welcome culture and refugees being integrated in Sweden, was mostly portrayed within Swedish national borders.

– It is an important finding that the humanizing visual frame exists in Swedish newspapers, yet is not heavily distributed. Individual or family portraits are mostly present in pictures taken in Sweden such as in and around refugee accommodation centers, says Jelena Jovičić.

The racialized gaze of the border

This is also in line with another finding in her thesis, that she describes as the “racialized gaze of the border”.

– This is an understudied field of research, coming from critical border studies. It has to do with how border crossings select people out. Specific bodies, mostly racialized as white, are ensured a smooth passing and are not questioned. Others are considered suspicious and their movement is consistently interrupted, says Jelena Jovičić.

This is seen in the images depicting refugees, where the media audiences in the context of Western Europe mostly get to consume images of the so-called ‘border spectacle’ at the outskirts of Europe, she explains. Here, bodies of those fleeing are captured trying to cross fortified borders or caught in trauma of the often-deadly sea journeys.

People racialized as white, especially those with the privilege of, in this context, EU citizenships, are not spectacularized in the same way today, she states.

– These physical images that people are repeatedly exposed to often serve as evidence for the need for further securitization of the European borders and increased policing of people racialized as non-white.

While studying how people with experience of flight are portrayed, Jelena Jovičić, who also has an activist background, felt the urge to resort to more engaged research methods – methods that also push for positive change in communities she worked together with. She therefore co-organized workshops with people with recent flight histories in a project called “Oppositional looks” in Belgrade, Serbia, in 2018 and 2019. The aim of the project was to enable spaces for producing counter-images that defy the stereotypical depictions of flight and people fleeing.

– My main motivation of doing this project was to explore ways of doing sociological research in a more engaged manner. We hit some walls during the project though, but these failures also became part of the findings and conclusions of this study.

For example, when she presented her research plan to the participants in a workshop – to capture images that illustrate their perspectives on life in exile, regardless of the mainstream image of what constitutes “refugeeness”, she was met with a lot of blank faces. She realized that not many participants shared her enthusiasm for the research side of this topic.

– One reason to this reaction might have the time frame, it should have been different. Participatory research requires us as researchers to invest much more time to get to know each other, communicate the aim of the project to participants, and to build trust, says Jelena Jovičić.

There were also practical issues that came up – one idea was for the participants to take photographs of their everyday life with the analogue cameras used during the workshops. But some participants raised concerns that it would be difficult to carry bulky analogue cameras back to the government-run asylum centers that they lived in and take pictures there. They were also concerned about their safety, not knowing how the personnel there would react to this.

Instead, they decided to go on daily photo walks together around the city. Jelena Jovičić says that this turned out to be an enjoyable experience, although it did not allow for the participants to capture their everyday life in its entirety as initially planned. However, the photo walks offered a different type of photo series, one that enabled participants to create visual narratives that include but also go beyond their experiences of flight and life in exile. One such example was the numerous selfies and portraits of participants posing in front of Belgrade’s landmarks as often captured by tourists.

– These tourist photos can actually be seen as counter-images in themselves. The vast number of stereotypical portrayals of flight in the media created a sort of a visual impossibility to link bodies of those who flee with acts of joy, ease or prosperity, something that tourist photos often aim to capture. This is why, as part of this research project, engaging participants to make decisions together in dialogue with the researcher throughout the research process was essential for the empirical outcomes of this study, says Jelena Jovičić.