More than 620 participated in the online master's ceremonies

The university's first online master's conferments were held in Aula Magna on 6 and 20 November. 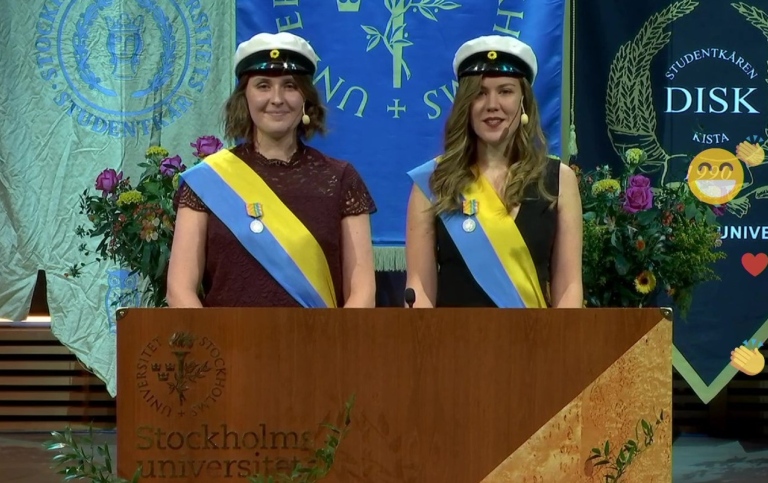 On Friday, November 6, Stockholm University's very first digital master's conferement was held. About 250 people with a master degree or equivalent at an advanced level had chosen to participate in the ceremony, which this time was divided into two live streamed ceremonies. On Friday, November 20 it was followed with yet another two online ceremonies, this time with more than 370 participants.

At previous conferment ceremonies, Aula Magna's auditorium has been full of participants with families and friends, up to 1200 people. This afternoon, the auditorium was almost empty, only speakers, technicians and staff were present.

The highlights of the ceremonies were when Marshals Fanny Johnson and Emilia Nygård presented all new graduates with names and photographs. Loved ones who watched the ceremony could interact by sending so-called emojis that swept across the screen during the live broadcast.

The entertainment was provided by Stockholm University Choir as well as a brass quartet and a marimba duo from the Royal College of Music (KMH).

Stockholm University would like to once again congratulate everyone on their graduation! We are happy that you have chosen to study with us.

Read more about the master's conferment and watch the films here!