The coastal zones are among the most effective areas on Earth at sequestering carbon from the atmosphere. Treated right, these ecosystems are important corner-stones in climate change mitigation, but if degraded, they instead release large amounts of greenhouse gases, re-enforcing global warming. Urgent action is needed to preserve and restore the Baltic Sea coasts and use these systems to work in favor of the climate – not against it.

The land-ocean transition zones, the coasts, are biodiversity and productivity hotspots. In submerged coastal landscapes, a mosaic of seafloor vegetation provides habitat for numerous marine organisms, but these ecosystems also play a significant role in the oceanic carbon cycle. In fact, coastal ecosystems sequester carbon – often referred to as blue carbon – from the atmosphere and oceans at significantly higher rates, per unit area, than terrestrial forests. To date, it is estimated that coastal blue carbon systems sequester 4 to 10 tons of carbon dioxide per hectare and year, thereby accounting for almost half of the total carbon sequestered in ocean sediments, despite that they cover less than two percent of the ocean floor.

With these outstanding properties, vegetated coastal ecosystems play a critical role in capturing carbon that would otherwise remain as atmospheric carbon dioxide and exacerbate climate change. Although often overlooked, it is now time to acknowledge this important ecosystem service and consider it a key argument for both the preservation and restoration of Baltic Sea coasts. 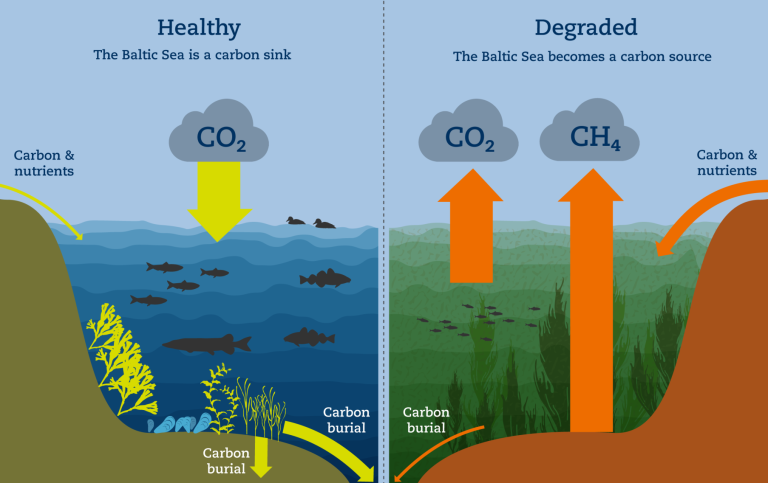 It is hypothesized that healthy coastal ecosystems with a high biodiversity work as effective carbon sinks. Coastal ecosystems in a degraded state with lower biodiversity have a limited carbon sink capacity and can be net sources of the climate-relevant greenhouse gases carbon dioxide (CO2) and methane (CH4). Nevertheless, the potential of different types of coastal ecosystems to sequester carbon and the influence of disturbance on this process has not been quantified. Similarly, the role of coastal biodiversity is not well understood, neither in the Nordic countries nor elsewhere in the world. Illustration: Jerker Lokrantz/Azote

Actively restore degraded but important carbon-sequestering coastal habitats, such as those of eelgrass and bladderwrack.

Include managment of marine coastal ecosstems in climate policies.

Support research on blue carbon ecosystem in the Baltic Sea.