The James Webb pictures - What now?

The first remarkable pictures from the James Webb Space Telescope, JWST, have been revealed, and there are several researchers and projects at Stockholm University that relates to JWST. 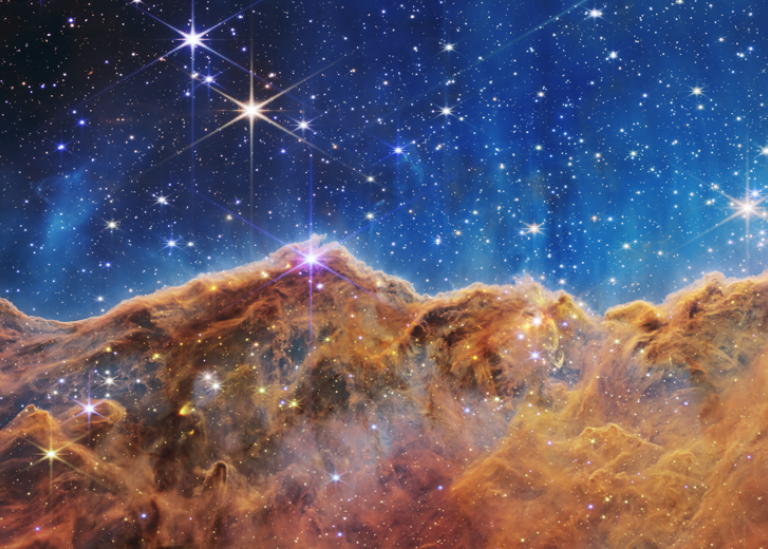 The Carina nebula is a stellar nursery. Photo: ESA

Researchers from the Department of Astronomy explains the released images in their own words below, as well as describes the research being done here at Stockholm University. 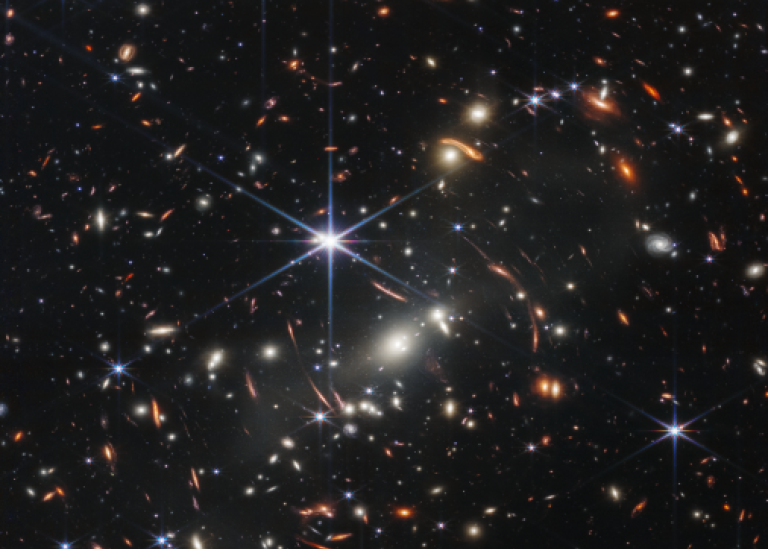 The combined gravity of the galaxies and Dark Matter in the massive galaxy cluster SMACS 0723 bends light from distant galaxies behind it, making them appear as stretched-out arc fragments forming a circular pattern around the cluster center. Some of the galaxies in this field are among the oldest and most distant objects known. Their light has traveled up to 13.1 billion years to reach the telescope, revealing one galaxy as it looked only 700 million years after the Big Bang.

Later in the year, Stockholm University researchers will use JWST to study other such gravitational lens systems. One program led by Emil Rivera Thorsen will use the NIRSpec instrument to study the inner workings of the brightest known gravitationally lensed galaxy. Researchers from the university are involved in more programs studying gravitationally lensing clusters, one targeting extremely magnified stellar clusters that can be studied to understand the details of star formation at extreme distances.

The cluster centre was also imaged with MIRI, which is the instrument on JWST which extends furthest into the infrarred and which Sweden has been part of developing. In the autumn MIRI will take a 50 hours - that is a factor of 30 longer than the MIRI images just released of SMACS - deep exposure of the Hubble Extremely Deep (XDF).
Göran Östlin, Arjan Bik, and Jens Melinder are part of the European MIRI consortium and will thus take part in analysing the images of these very distant galaxies.

The Carina nebula is a stellar nursery. Photo: ESA

The Carina nebula is a stellar nursery located in our own Milky Way. This Webb image of the "Cosmics Cliffs" shows the sharp edges of a giant gaseous cavity with a definition higher than ever seen before. Webb observes in the infrared and we can look in to the dust and find the youngest stars still forming.  We also see how the ultraviolet radiation of the young stars slowly erodes the clouds of dust. The "steam" that appears to rise from the dust is hot ionized gas and hot dust streaming away from the nebula.

Two JWST observational programs on topics related to the Carina star-forming region include astronomers at Stockholm University. Arjan Bik is a co-investigator in a project that will research how planets form under the influence of such strong ultra violet radiation. The disks that these planets form in are eroded away much quicker. With MIRI/MRS spectra we can measure the molecules in these disks and derive the properties of them and how they are influenced by the ultra violet radiation.

In the second program, JWST-FEAST, Angela Adamo leads a study of thousands of these rapidly evaporating regions by observing nearby galaxies. There will be less details than seen in the Carina nebula (due to their large distance) but the researchers will gain unique statistics and insights on their morphological evolution as a function of time, which will help developing a model to predict their evolution. 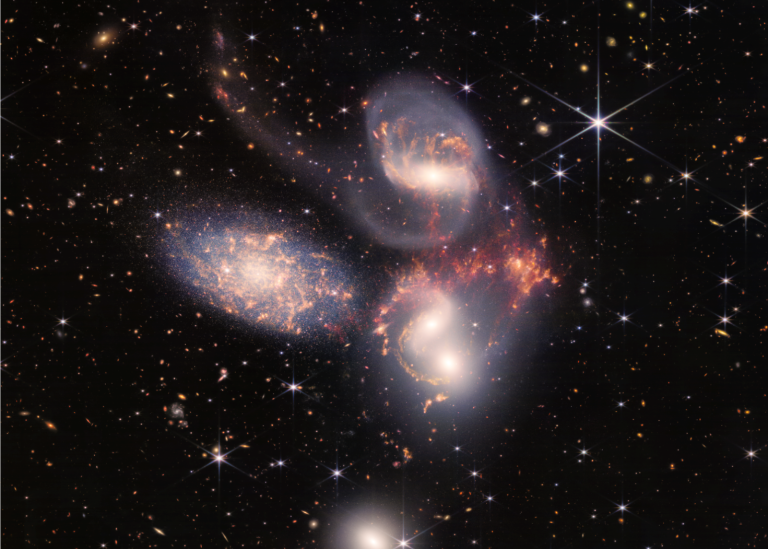 The Stephan’s quintet is a group of 5 galaxies, which appear to be located close to each others. In actuality, 4 of these systems are in the process of colliding, while one of them is in the foreground and not directly connected. Such collisions, rare in the local universe, happened more often when the universe was younger and are fundamental for the formation of giant galaxies. Even our own Milky Way will in several hundreds of million year collide with the Andromeda galaxy and the Triangulum Galaxy. The JWST images reveal the location of the stellar nurseries in these galaxies. The JWST observations of the Stephan’s Quintet also show a more clear picture of the collision between the galaxies. We can clearly see strong emission in between the galaxies created by the gas shocked into the collision. Shocks increase the gas and dust temperature, which then emit photons at the wavelength ranges covered by JWST.

MIRI and NIRSPEC integral field spectroscopy of the galaxies shows many emission lines, revealing the presence  of ionized gas, molecules and dust. The spatial distribution of this gas can be used to study how the supermassive black hole in the center of one of the galaxies affects the gas in the galaxy, how many stars are forming and what type of dust it contains. Via the doppler effect researchers can also measure velocity of the gas, which well help us to understand how supermassive black holes feed and grow.

Similar measurments will be done in the JWST observations led by researchers at Stockholm University. Stars form out of dense gas and dust cores and their light is initially trapped by the left over gas and dust. The researchers don’t yet understand how long it takes for the star light to clear their surrounding such that it can reach us. In the JWST-FEAST project they will use the infrared capability of the JWST to look through these thick dust layers and actually witness the gradual emergence of stars from their nurseries. Researchers from Stockholm University will also study galaxies with super massive black holes as well as very high rates of star formation, but much further away, using the MIRI/MRS spectrograph as partners in the European MIRI consortium. This will give us much more details about how stars form in these extreme galaxies as well as how black holes grow. 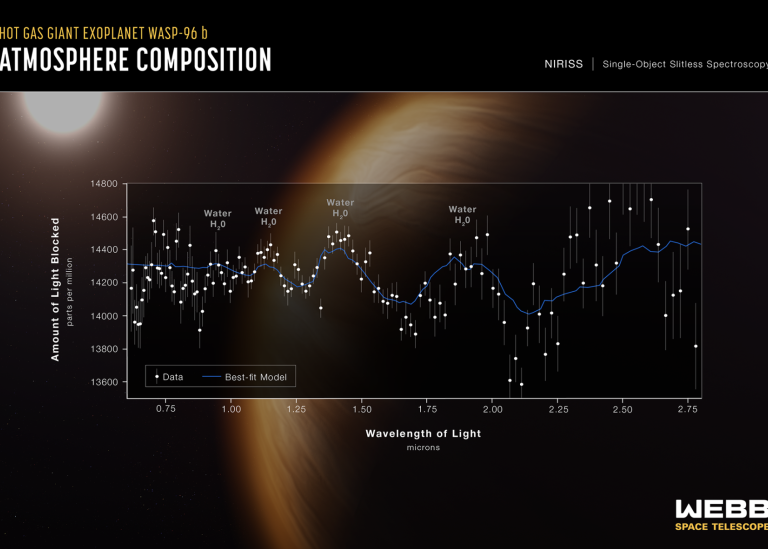 Spectrum from the exoplanet WASP 96b. Photo: ESA

WASP-96b is a hot Jupiter-like planet with a year that is only 3.4 days long. Its parent star is similar to the Sun and located about 1100 light-years away from Earth. The orbit of the planet makes it transit in front of the star. During transit, some of the starlight passes through the planetary atmosphere, imprinting features in the observed spectrum. Thanks to the extraordinary sensitivity and stability of Webb, these features are observable and enable a chemical characterisation of the atmosphere. In the displayed Webb spectrum, features from water vapour are detected. The relative weakness of the features also enables the researchers to infer clouds in the atmosphere. These data showcase Webb’s capabilities and are just a foretaste of what we can expect in the future. Observations in longer wavelengths by the Webb instrument MIRI will be sensitive to features from other molecules, such as methane and carbon dioxide.

Concentrated efforts will also enable the more difficult atmospheric characterisation of Earth-like planets. At Stockholm University Alexis Brandeker leads a Webb programme that will characterise the atmosphere around the super-Earth lava planet 55 Cancri e. Brandeker is also participating in two other programmes dedicated to characterise planetary atmospheres. Markus Janson is part of an early release science programme that will exploit the sharp resolution of Webb to directly image and obtain spectra of three exoplanets.

Read more about the James Webb Space Telescope and see the pictures in greater resolutions at the Europeans Space Agency's website: