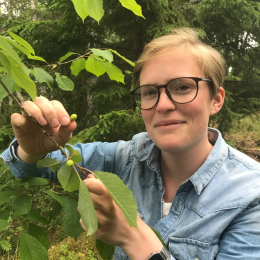 In my PhD project I study distribution patterns of fleshy-fruited woody plants, i.e. fruit bearing trees and bushes. The distribution of these species are particularly interesting to study since their dispersal is mediated by birds and mammals who eat their fruits and disperse their seeds.  This interaction is important to study since it involves a large number of plants (fruit bearing trees and bushes make up around 35-40% of the woody species in temperate forest) and a large number of dispersers. Furthermore, many of the woody species with fleshy fruits occupy semi-open habitats such as forest edges and woodlands, thus being strongly influenced by historical and current land use. Some of these species have also actively been influenced by humans, for example due to the use of fruits as food.

Currently, I am studying the effects of human management on the distribution of fleshy-fruited species by correlating current distribution data with information on historical land use retrieved from historical maps.