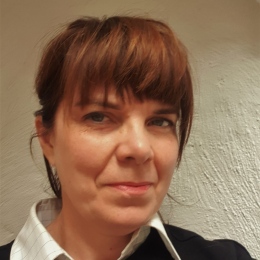 Magdalena Holdar is senior lecturer in Art History at the Department of Culture and Aesthetics. She is programme director of the International Master's Program in Art History, teaches in the international master's programme Curating Art and is also part of the editorial board of the newsletter Aktuell högskolepedagogisk Forskning, published by Centre for the Advancement of University Teaching, Stockholm University.

I have been teaching courses and supervised students on all levels including PhD candidates since 2005, at Stockholms University but also at Södertörn University College and Konstfack University College of Arts, Crafts and Design. Between 2007 and 2014 I was Director of the two-year international Master's programme Curating Art, an education I remain engaged in through teaching and supervision of theses. In 2014 I taught a course at Amherst College, in close collaboration with the Mead Art Museum. The semester in Amherst was part of the STINT programme Teaching Sabbatical (prev Excellence in Teaching).

Course developed for other university: The Effects of Exposure (Södertörn University College).

I received my PhD at Stockholm University in 2005 with the dissertation Scenography in Action: Space, Time and Movement in Theatre Productions by Ingmar Bergman. Using director Ingmar Bergman’s late productions as case studies, the thesis developed theoretical and methodological tools for the analysis of art that is ephemeral or primarily exists in a state of continuous change.

My interest in the performative aspects of art and analysis has been further developed in later projects, such as the ongoing research Next to Fluxus / Seen from the Side (2016). This project investigates artistic and creative strategies in the transnational artists' network Fluxus (from circa 1960), with focus on the nodes Stockholm, Copenhagen, Cologne, Tokyo and New York.

Engagement in the curatorial master's programme Curating Art has also coloured my research interests and is currently being developed in a project that will investigate migrations in the work of artists in the 1970s and 1980s, when artistic practices were adopted by curators and thereby shifting the power-relations of the artfield.

Show all publications by Magdalena Holdar at Stockholm University