Johan LindquistHead of the Department, Professor 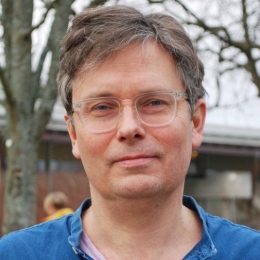 Name and title: Johan Lindquist Head of the Department, Professor

Johan Lindquist is Professor of Social Anthropology and previously served as Director of the Forum for Asian Studies at Stockholm University. During the spring of 2020 he was a Fellow at the Stockholm Centre for Organisational Research (SCORE) and a visiting scholar in the School of Media Studies at the University of Amsterdam, and during 2021 a Visiting Fellow at the Max Planck Institute for Social Anthropology. He has previously been a visiting scholar at Harvard and Cornell and a visiting professor at the Asia Research Institute at the National University of Singapore. He is a member of the editorial board of Pacific Affairs, has published articles in journals such as Ethnos, Journal of the Royal Anthropological Institute, Mobilities, Public Culture, Pacific Affairs, and International Migration Review, is the co-editor of volumes such as Figures of Southeast Asian Modernity (University of Hawai’i Press, 2013), and the author of The Anxieties of Mobility: Development and Migration in the Indonesian Borderlands (University of Hawai’i Press, 2009).

Lindquist’s research has most generally been concerned with the relationship between transnationalism and migration, with a particular focus on Indonesia and Southeast Asia, but he has also dealt with themes such as HIV/AIDS, drug use, prostitution, factory work, and documentary film. While his dissertation research dealt with the lives of migrants and tourists on the Indonesian island of Batam—part of a transnational Growth Triangle that connects Indonesia, Singapore, and Malaysia—he has later focused on the forms of brokerage and infrastructure that shape contemporary transnational migrant mobility from Indonesia to countries across Asia and the Middle East.

Currently he is working on two projects funded by the Swedish Research Council. The first focuses on Indonesians who produce and sell commodities such as followers and likes on social media platforms such as Instagram, but further attempts to develop methods to describe and conceptualize their relationships with a broader transnational market. A second project, in collaboration with Tekalign Ayalew Mengiste, deals with a critical dimension of the intensification and deepening of circular migration, namely the expansion of “migrant preparatory training,” vocational education in the deployment of low-skilled documented international labor migrants from sending to receiving countries. The project takes the circulation and implementation of these training programs as an empirical entry-point for understanding how the recruitment, preparation, deployment and channeling of documented low-skilled labor migration is evolving through increasingly sophisticated means.

Along with his scholarly work, Lindquist has also worked on other types of projects. He is the director of the documentary film B.A.T.A.M. (https://store.der.org/batam-p181.aspx), which is a companion piece to his book The Anxieties of Mobility. He also has an ongoing collaboration with US artist and scholar John Freyer at Virginia Commonwealth University about IKEA. See, for instance: www.billybookcase.com. In the fall of 2019 he was an ”interpreter” in Tino Sehgal’s work This Progress, which opened Stockholm University’s exhibition space Accelerator (https://acceleratorsu.art/en/utstallning/this-progress-en/).

Shadow Economies of the Internet: An Ethnography of Click Farming

This project investigates the devices, actors, sites, and processes that are at the center of the developing controversy around “fake news” and “fake clicks”: so-called “click farms,” persons or companies selling likes, views, and followers on social media platforms such as Instagram and Twitter via unregulated online marketplaces.

This project deals with a critical dimension of the intensification and deepening of circular migration, namely the expansion of what we term “migrant preparatory training,” vocational education in the deployment of low-skilled documented international labor migrants from sending to receiving countries.

Show all publications by Johan Lindquist at Stockholm University

Name and title: Johan Lindquist Head of the Department, Professor