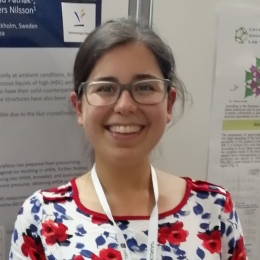 I am a postdoc at the XSoLaS group, focusing mainly on amorphous ice and its transitions, including to crystalline ice. Working mainly with XRD, and XPCS techniques.I did my PhD on Food Science at Leeds University, studying cacao butter and how its crystallisation kinetics are affected by pressure and different thermal treatments, using techniques such as DSC, XRD and NMR.

I am interested in phase transitions of different materials and the application of X-ray methods to further our understanding of their structure and dynamics.

I am also keen on Science Communication, I have participated in a few Pint of Science events, and during my PhD was also part of Research Nights and PubhD. You can follow me on Twitter @M_LaddParada.

Show all publications by Marjorie Ladd Parada at Stockholm University