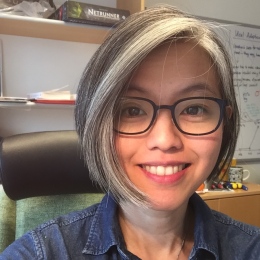 I am a PhD student at the Centre for Research in Bilingualism. My project involves native listener speech perception and adaptation to variation in speech (both native and non-native). I am interested in rational approaches to cognition and I work within a Bayesian framework of speech perception, investigating the extent to which it can reliably model the behaviour of native and bilingual listeners.

My current project looks at the process of adaptation to foreign accented Swedish by Swedish native listeners. The study follows the lexically guided perceptual learning paradigm (cf. Norris, McQueen & Cutler, 2003) and investigates how native listeners learn and adapt to natural accent of an L2 speaker. I use statistical modelling under Bayesian ideal observer principles to show that the statistical distribution of acoustic phonetic cues can predict the behavioural outcomes following exposure to accented speech.

I am also planning two follow-up studies (one in American English, and one in Swedish) that test the hypothesis that listeners adapt to speech by updating their beliefs about acoustic cue distributions after exposure to speakers with different cue distributions which should result in observable changes in their categorisation behaviour. This could potentially explain the differences in findings that report that bilingual listeners either maintain 2 separate sound categories for each language they know, or that they show an intermediate categorisation boundary between their two languages.