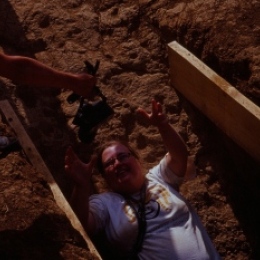 I am a docent in central Italian settlement archaeology at the University of Oulu where I held a postdoctoral post between 2005 and 2008. I have been affiliated with the McDonald Institute of Archaeological Research since my PhD and I will continue to be an affiliated researcher until 2017. I am also the Editor-in-Chief of the Monographs of the Archaeological Society of Finland (MASF) and the Social Media and Communications Officer of the Royal Archaeological Institute.

The ultimate goal of my new project Changing group identities in the multicultural pre- and postcolonial central Italy that I will work upon in 2016–2018 at Stockholm with the funding from the Swedish Research Council (Vetenskapsrådet) is to develop a general model for characterising multicultural group identities. This model could be applied at least in part to any geographic area or archaeological period. My own research questions relate to a specific historical and cultural situation that led to the expansion of Rome and the creation of the Roman Empire and I will specifically explore the importance of multiculturality as a precondition to certain historical developments.

The geographical and cultural context of my study is central Italy between the Orientalising and Republican periods. These periods incorporated the precolonial and colonial situations in relation to Latin colonisation that defines the geographic extent of the study area. My key case study is the Faliscan area in south Etruria, and its relationship to other cultural areas in the region, such as the Latin, Etruscan and Sabine areas. Both my postdoctoral project, The boundaries and territorial geographies of Archaic and early Roman central Italy, and this new project as its extension are built upon my fieldwork within the Nepi Survey Project and the Remembering the Dead excavation project at Crustumerium (Rome).

My field projects made me interested in intercommunity interaction and its different outcomes in the region (cf. Rajala 2012; in press) and resulted in me starting working towards the theoretical framework of my current research. My model characterising group identities will be based upon Social Identity Theory (SIT) that has been only rarely applied in. Different archaeological proxies will be used to describe the attachment of individuals to different individual and group identities, most prominently inscriptions and tomb architecture. My discourse will be interdisciplinary between Etruscology, Roman archaeology and Roman history and combine theoretical elements from different social and humanistic disciplines. In addition, my project is linked to the separate research project of Dr Karin Westin Tikkanen at the University of Gothenburg in classics, studying the earliest alphabet signs in Italy, also funded by the Swedish Research Council (Vetenskapsrådet).

I continue to publish articles on the Nepi Survey Project I ran as a PhD student and on of The Romanisation of a Faliscan town project, I acted as the Principle Investigator (PI) for, financed by a British Academy Small Grant. The final publication of the Remembering the Dead excavation project at Cisterna Grande (Crustumerium, Rome, Italy) is under preparation.

I am now the coordinator of the Stockholm Volterra Project that will carry out prospection and research in this Etruscan town again during the Academic Year 2016/2017 for which I have funding from different sources.

Show all publications by Ulla Rajala at Stockholm University