A new role for transnational corporations in an increasingly crowded ocean?

The MV Wakashio ran aground on a coral reef in Mauritius in late July 2020, leaking 1,000 tonnes of oil into the crystal blue waters of a lagoon, threatening mangrove, seagrass and mudflat habitats. Since then, dozens of dead dolphins and porpoises have washed ashore, writes Robert Blasiak in a new article in The Conversation. 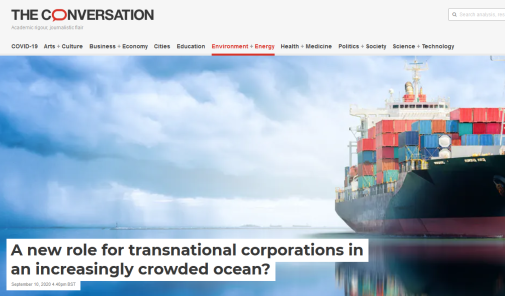 The article is published on September 10 and is written by Robert Blasiak, research Fellow in Ocean Management, Stockholm University.

He writes:
“In the last few decades, many ocean-based industries have grown dramatically. Seabed mining scarcely existed in the 20th century, but since 2001, 1.4 million square kilometres of seabed have been leased for exploration. Over roughly the same period, there has been a fourfold increase in the volume of goods transported by shipping.
With so much going on in the ocean, what’s the equivalent of putting a rock next to places like the coral reefs of Mauritius so they don’t get stepped on?”

Read the article published in The Conversation:
https://theconversation.com/a-new-role-for-transnational-corporations-in-an-increasingly-crowded-ocean-145422

Read more about the collaboration between Stockholm University and The Conversation and how to pitch an article idea: https://www.su.se/english/staff/services/information-communication/pitch-an-article-idea-for-the-conversation-1.462268