How often do you look at your mobile phone and what do you use it for? These are questions that Barry Brown studies in order to created smarter technical solutions. 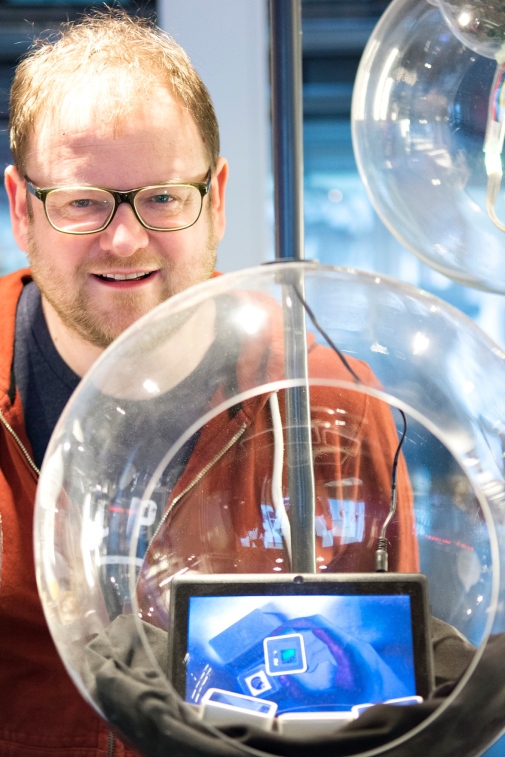 Barry Brown came to the Department of Computer and Systems Sciences (DSV) and Mobile Life five years ago from the University of California, San Diego. Enjoyment is the word he uses to describe the focus of his research. The aim is to increase the understanding of how people use their mobile phones and other portable devices. His research team has equipped test subjects with body cameras that register how often and in what ways they use their mobile phones and smartwatches. These data have then been used to increase the understanding of how we behave in our daily lives in relation to the technology that surrounds us. This may involve, for example, how often we look at our mobile phone or whether we allow messages from the phone to interrupt conversation. These data will then be used to inform the design of new products.

“In order for the interaction between human and machine (mobile phone or smartwatch) to be even smoother, we need to create environments that make us smart, where our daily behaviour generates smart technical solutions,” says Barry.

Barry calls this new type of human-machine interface “smart implicit interaction”. It is a form of interaction that stays in the background without disturbing us. Instead, it modifies its behaviour and adapts to the situation based on data analysis of, for example, our speech and our movements.

In order to take this research to the next level, Barry has, together with Kia Höök, professor at KTH and former director of Mobile Life, been granted SEK 33 million by the Swedish Foundation for Strategic Research (SSF) for the project “Smart Implicit Interaction”. The work is based on Mobile Life’s research on speech and physical interfaces. The project will develop technologies that act without intrusive interfaces. About 15 researchers are involved in the project, which also involves the research institute SICS and a number of businesses, including Husqvarna.

In his research, Barry has touched on several other areas where smart implicit interaction could be implemented, including self-driving cars and how mobile phones can be used for games such as Pokémon Go. Other projects focus on how to make better use of co-use services such as Airbnb.  The algorithms used here have additional data that can be used, for example, to collect tips from users about places worth visiting, so-called algorithm tourism.

Although Mobile Life is now being decommissioned, Barry has continued funding and will bring his research team to DSV.

“I look forward to integrating with DSV. It has several reputable research areas that are close to my research focus.”

Read more about Mobile Life and what happens next.