“Iran: decades of unsustainable water use has dried up lakes and caused environmental destruction”

Salt storms are an emerging threat for millions of people in north-western Iran, thanks to the catastrophe of Lake Urmia. Once one of the world’s largest salt lakes, and still the country’s largest lake, Urmia is now barely a tenth of its former size, write three researchers at Stockholm University in a new article in The Conversation. 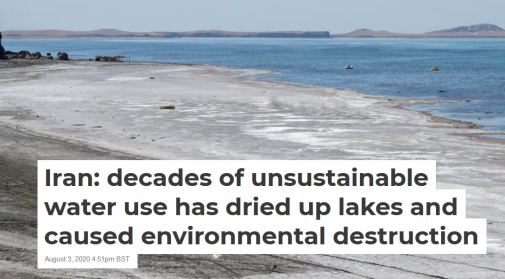 The article is published on August 3 and written by Zahra Kalantari, Associate Professor, Georgia Destouni, Professor of Hydrology, Hydrogeology and Water Resources, and
Davood Moshir Panahi, PhD Student, all at the Department of Physical Geography, Stockholm University.

They write: “Salt storms pose a direct threat to the respiratory health and eyesight of at least 4 million people living in both rural and urban areas around Lake Urmia. Increasing soil salinity reduces the yield of agricultural and orchard crops grown around the lake, while the lake has shrunk so much that boating is no longer possible, resulting in a loss of tourism.”

Read the article published in The Conversation: https://theconversation.com/iran-decades-of-unsustainable-water-use-has-dried-up-lakes-and-caused-environmental-destruction-140565

Read more about the collaboration between Stockholm University and The Conversation and how to pitch an article idea: https://www.su.se/english/staff/services/information-communication/pitch-an-article-idea-for-the-conversation-1.462268