By making use of an unexpected species difference between rats and mice, scientists have identified a system in the brain that controls how males behave when they become fathers. A central component in this system is the hormone, prolactin, which has previously been shown to prepare the female for motherhood. The researchers were also able to control how much interest the males took in their offspring by experimental manipulations. 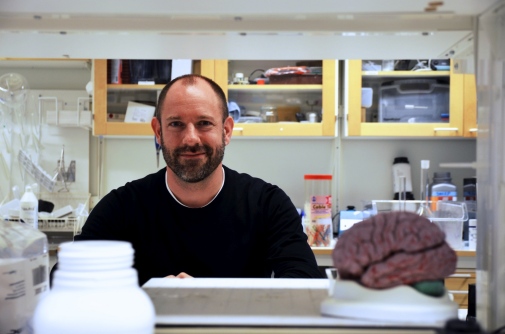 Christian Broberger, professor of neurochemistry at the Department of Biochemistry and Biophysics. Photo: Mika Neitz Pettersson

The parenting we receive affects us for our entire lifetime. While a lot has been learned about what happens in the female’s brain as she becomes a mother, we know very little about the processes that determine if a father will take an interest in his offspring or not. Researchers at Stockholm University have recently tackled this question by studying rats and mice.

These two species have much in common, but exhibit one curious difference: among rats the female alone is responsible for taking care of the young, whereas mice are “biparental”, i.e. both males and females can perform parental chores.
“We were able to trace this species difference to the electrical activity in a small group of nerve cells in the hypothalamus, an evolutionarily old part of the brain that controls, among other things, hormone levels”, explains Christian Broberger, professor of neurochemistry at the Department of Biochemistry and Biophysics, Stockholm University, who led the study.
His group has previously demonstrated that the electrical activity of these so-called “TIDA neurons” fluctuates rhythmically – oscillates – but at double the speed in mice compared to rats. As a consequence, they now show, the mouse TIDA neurons release less dopamine. This, in turn, results in high blood levels of the hormone, prolactin.

In male rats, the relationship was the opposite. Prolactin is well established as a hormone that triggers maternal functions in many species, including humans. The role of this hormone in males has, however, remained mysterious.

The researchers found that the high prolactin levels in mice activates a part of the brain that controls parental behaviour, and that this caused the male to actively care for his pups; he picks them up when they have strayed, brings them to the nest and huddles over them to keep them warm. Rat fathers showed none of these behaviours – until they were treated with prolactin.
“In this study, we identify a chain of events that controls parenting in males, and we were also able to switch the behaviour in mice and rats by experimentally altering different components within the chain”, says Christian Broberger.
He explains that a key insight was that prolactin is necessary, but not sufficient, to trigger male parenting.
“When we administer prolactin to rat males who have not themselves yet become fathers, the hormone did not affect behaviours. It was only after they had gone through the experience of fathering offspring, and the influence of an as yet unidentified factor, that prolactin can exert a ‘paternal effect’”.
The researchers were surprised to find that it was the oscillation frequency that determined how the father behaved towards his pups. This finding opens the possibility that how fast the TIDA neurons oscillate can act as a control dial for paternal behaviour. In the study, the research team could show that by artificially slowing down the mouse TIDA neurons to the frequency recorded in rats using so-called optogenetic techniques, mouse fathers could be made to lose interest in their young.
If similar mechanisms also underlie human parenting is not yet known, since the TIDA system is not accessible for study in the same way as in experimental animals. But the components that have been identified in the system – both brain neurons and hormones – are in many aspects conserved through evolution, and can be found also in humans. The findings in the study open the way for asking and addressing new questions about what can make a father take more or less interest in his children.
The study has been performed at Stockholm University and Karolinska Institutet, in collaboration with colleagues at the University of Otago, New Zealand. The work has been made possible through support from the Swedish Research Council (Vetenskapsrådet), the European Research Council (ERC), the Swedish Brain Foundation (Hjärnfonden) and Novo Nordisk Fonden.

Optogenetics is a technique where light-sensitive ion channels can be introduced into electrically charged cells, such as neurons, through genetic manipulation. By shining light of different wavelengths onto the cells, the ion channels can be opened or closed, which offers a way to turn the cells on or off.

Oscillations. Neurons are electrically excitable; the electrical charge provides them with the energy they need to communicate with other neurons. In many neurons the electrical charge fluctuates – oscillates – rhythmically in different frequencies. A common example is the waves that can be seen in the electroencephalogram (EEG), recorded during a neurological investigation. The function of brain oscillations is an intensely studied topic in neuroscience.

The article “A neuro-hormonal circuit for paternal behavior controlled by a hypothalamic network oscillation” is published in the scientific journal Cell.