The proportion of local politicians with weak ties to the labor market and to the nuclear family is a good deal higher among populist, radical-right Sweden Democrats than among other parties in Sweden. The Sweden Democrats' support is also significantly higher in precincts where many voters have weak ties to the labor market and the nuclear family. These are results from a study recently published in The Review of Economic Studies. 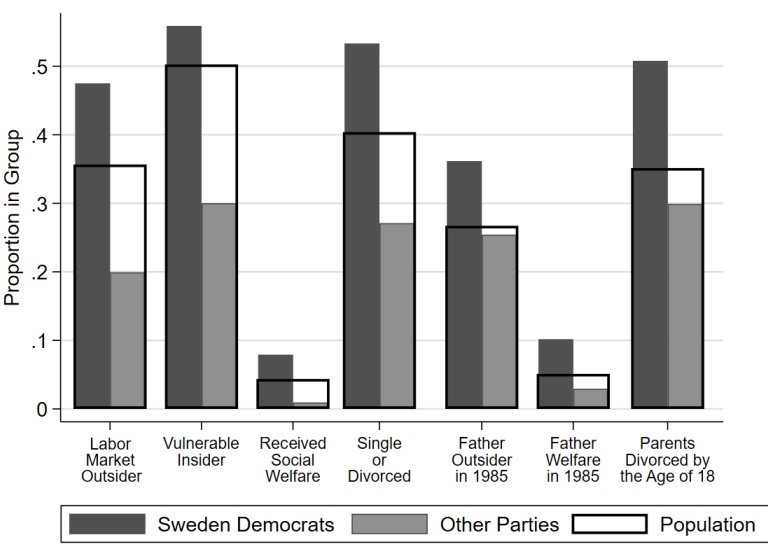 The graph compares the size of seven socio-economic groups among (1) Sweden Democrats' municipal politicians (black bars), (2) other parties' municipal politicians (gray bars) and (3) general population 18-65 years (white bars). "Labor market outsiders" are people with weak or no connection to the labor market. "Vulnerable insiders" are people in the core workforce, but with relatively precarious jobs. "Received social welfare "are those who received financial assistance during the calendar year. Underlying data comes from Statistics Sweden during three election years. The figures' shares are weighted to reflect the relationship between politicians and the population in the average municipality. The number of observations is 1,402 for Sweden Democrats, 38,911 for other parties and 19,317,388 for the general population.

The researchers used data from 1979 to 2014 to compare the Sweden Democrats' (SD) municipal politicians with other parties' municipal politicians – as well as SD's voters with other parties' voters. SD's politicians (both elected and nominated) are less likely to have stable jobs, and are also at greater risk of losing their jobs*, than politicians from other parties. They also more often live alone. As the appended figure shows, the differences between the parties are great – tens of percentage points – and they concern the politicians themselves, as well as their parents during the time when the politicians grew up. SD has also received more votes in constituencies where fewer people have permanent jobs and have a greater risk of losing their jobs.

Sweden's rich micro data provide a unique opportunity to shed light on these issues, as we have access to detailed (though anonymized) measures of the living conditions of all politicians, voters and their parents, says Torsten Persson.

In the last two decades, many democracies have seen populist radical right-parties grow stronger. The research in the paper is based on two clear features of these parties' policies: the critique of society's establishment and of immigration. The aforementioned results rhyme well with the hypothesis that criticism of the establishment makes it easier for the party to mobilize politicians and voters among individuals who themselves are on the fringes of society in terms of work and family. On the other hand, the researchers find no or weak support for a similar hypothesis: that SD's critical attitude to immigration attracts voters who live in areas with a large foreign-born population, or who work in a profession with a large proportion of foreign-born in the work force.

SD's entry into Swedish politics has increased the proportion of elected politicians with first-hand experience of a weaker connection to the labor market and nuclear family in their own or their parents' lives. The researchers also compared SD's politicians with those in other parties when it comes to several other personal characteristics. They measured these characteristics with the help of various registers, as well as a special survey of all Swedish local politicians. The data from these sources show that SD's politicians have lower formal qualifications from education and the labor market, poorer trust in others, poorer motives for community service and - to some extent - poorer private morale**.

One interpretation of our results is that vulnerable groups are now better represented, but by politicians with fewer qualifications and weaker motives for community service — something that can affect how the new politicians succeed in carrying out their tasks, says Johanna Rickne at the Institute for Social Research (SOFI), Stockholm University.

The study was recently published online in The Review of Economic Studies (Restud) and can be read in its entirety on the Restud web.

* Their occupations entail more routine tasks (see exact definitions in the article) and – according to previous research – their jobs are thus easier to rationalize away or replace with machines. During the recent financial crisis, for example, unemployment rose by much more for workers in these occupations than for those in other occupations.

** Here, the researchers used the Honesty-Humility score included in the HEXACO module developed by Lee and Ashton (2004).