“Turkey’s Neo-Ottomanist moment – A Eurasionist Odyssey”, focuses on the ways that Turkey’s international relations and orientations have changed, moving away from a Transatlantic stance.

This book, in some ways an extension of the project started in his previous book, “Turkey’s Mission Impossible: War and Peace with the Kurds” turns its focus outward to the ways that Turkey’s international relations and orientations have changed, moving away from a Transatlantic stance.

Cengiz Çandar coined the term “Neo-Ottomanist” nearly 30 years ago, predicting the emergence of Turkey’s current, increasingly strident, approach to global affairs. His most recent book tells the story of Turkey’s drift away from the West and the death of a transatlantic Turkey as a result of strategic autonomy and the authoritarian leanings of the government. However, this is not a pivot toward increased relations with the Middle East and Asian powers, as is often reported, but a pivot to Turkey itself, in the hopes of regaining its position of a major power player on the world stage.

Reviews of the book praise Çandar’s journalistic ear and foreign policy experience, his ability to weave together personal experiences with objective analysis, and the breadth of the sources he draws upon. 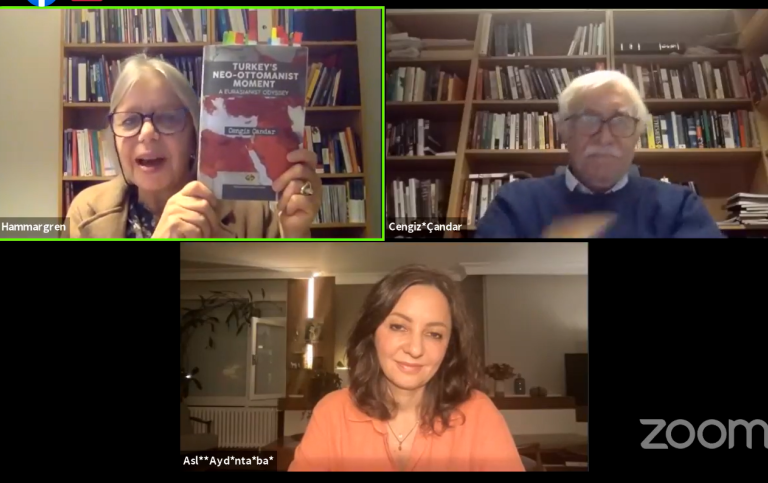 The publication of the book was celebrated with a digital book launch, co-hosted by SUITS and the Swedish Institute of Foreign Affairs (UI). Contributors included Cengiz Çandar, who is also a Senior Associate Research Fellow at UI, veteran MENA expert Bitte Hammargren, and Asli Aydıntaşbaş, a Senior Policy Fellow at the European Council on Foreign Relations.

The discussion focused on two turning points, 2016 and 2020, when Turkey turned to its own military and leveraged its geostrategic location and military industrial complex to exert control over its neighbors and gain a foothold as an international player through “competitive cooperation”. The question and answer period centered on the implications of this stance for the Middle East, Asia, and Europe as well as NATO and the EU.