Measuring Health
On the Theoretical Foundations of Health Status Evaluations 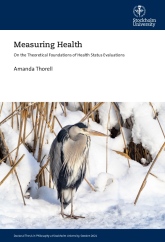 Abstract
This thesis is about the notions of health and pathology in medical theory. I develop a theory, which defines ‘health’ and ‘pathology’ in a way that solves several problems with earlier suggestions of how to define these terms.

The thesis also examines the most discussed theory of health and pathology, “the biostatistical theory” proposed by Boorse. Both the DPE-theory and the biostatistical theory are evaluated against a number of desiderata: the theory should (i) be theoretically sound; (ii) only use empirical, statistical, and logical terms; (iii) not involve values; (iv) be clear; (v) both account for health and pathology as reference class-relative properties, and account for the importance of integration of different physiological functions for health; and (vi) have reasonable implications. It is argued that the DPE-theory satisfies the desiderata, and that it does so better than the biostatistical theory.

The main contributions of the thesis are the DPE-theory’s models of dispositions, its approach to defining reference classes, its efficiency measure, and its way of drawing the line between high enough efficiencies and too low efficiencies. Other important contributions concern the desideratum about reasonable implications. It is shown how the DPE-theory contributes to solving two much discussed objections directed towards the biostatistical theory, “the problem of common “diseases” and “Kingma’s dilemma”. Further, the DPE-theory is used to illuminate discussions about certain types of conditions for which it is contested whether they should count as healthy or pathological.