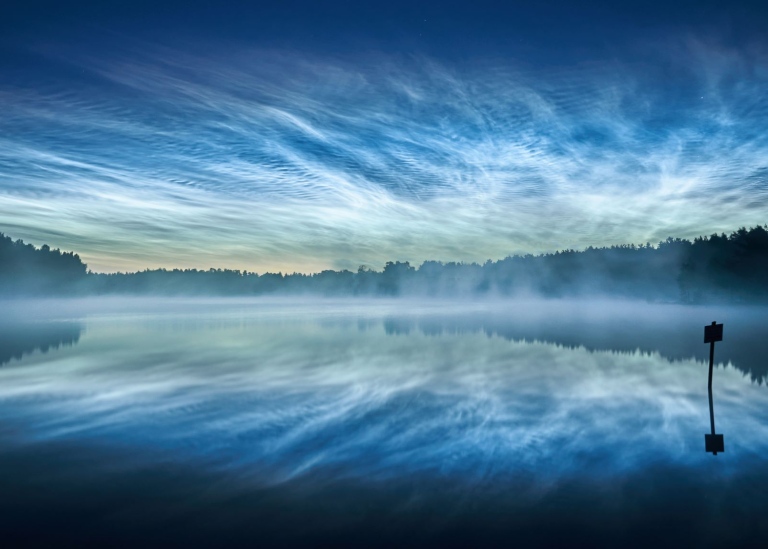 Atmospheric gravity waves of different scales and origins strongly modulate the wind field and temperature structure of the higher parts of the atmosphere. Direct and continuous measurements of these processes are particularly complicated in the mesosphere at about 50 to 100 km height due to the remote location of this region. Polar mesospheric clouds (PMCs) that form in the summertime between 80 and 90 km over the polar regions are highly sensitive to changes in the background atmosphere, and in particular to waves. This makes them an ideal tracer for atmospheric conditions and wave activity. However, in order to use them as a tracer, we need to better understand the influence of waves on the clouds on a local scale.

In this thesis, tomographic measurements from the limb viewing OSIRIS spectrograph on the Swedish Odin satellite are used to study 2D structures of PMCs. The aim is to improve our understanding of the clouds’ life cycle and of their interactions with waves and dynamics on different scales. First, a method is developed that combines the tomographic PMC measurements from the OSIRIS instrument with simultaneous measurements from the downward viewing CIPS instrument on NASA’s AIM satellite. The method allows studies of clouds in a common observational volume with a combined high vertical and horizontal resolution of cloud structures. Measurements of cloud brightness and ice content from the two instruments agree very well, and it is demonstrated that the combined dataset is well suited for studies of cloud structures and cloud microphysics. The combined dataset is further investigated to study assumptions on the particle size distribution of PMCs. We find that the commonly used Gaussian assumption cannot simultaneously describe the size distribution as seen by a column-integrating instrument (CIPS) and by a limb-integrating instrument (OSIRIS). Instead, we show that the particle population seen by a limb-integrating instrument is better represented by a broad lognormal distribution. In an atmospheric case study, the combined PMC dataset is used together  with simultaneous temperature and water vapor measurements from the SMR instrument on Odin to study a special event of a mesospheric front structure. We characterize the temporal and structural development of the front as seen by both satellites and discuss possible generating mechanisms. Finally, we extend OSIRIS’ tomographic view to the southern hemisphere. The structure and dynamics of the atmosphere are not symmetric, but hemispheric differences in Earth’s topography cause differences in wind systems at all atmospheric altitudes. We therefore apply the tomographic approach to study differences between the northern and southern hemispheres in PMC morphology and microphysics.