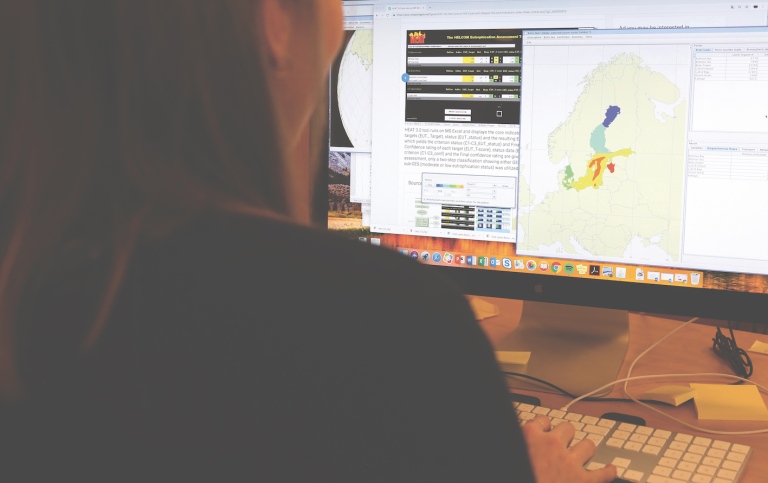 The Baltic Sea Center focuses on scientific issues that are important for understanding and managing the Baltic Sea and its catchment area. It can be analyzes and syntheses on all scales, from individual bays in the Stockholm archipelago and up to the entire Baltic Sea scale. We work to increase knowledge of important processes in the coastal area, assess how the environmental condition develops and evaluate the effectiveness of various measures.

In this scientific work, models of various kinds are often an important foundation. They are used, among other things, to assist others who work with managing the marine environment with decision-making material. We have, for instance, the Baltic Nest Institute Sweden (BNI), which assists HELCOM with scientific data and calculating emission ceilings for nitrogen and phosphorus within the HELCOM Baltic Sea Action Plan.

The Baltic Nest Institute is responsible for the Nest system, a decision support system aimed at facilitating adaptive management of environmental concern in the Baltic Sea. Nest can be used to calculate required actions needed to attain politically agreed targets for the Baltic Sea ecosystem. The main focus of the model is on eutrophication and the flows of nutrients from land to sea.

Baltic Nest Institute Sweden participates in several national and international projects aiming to understand the environmental problems in the Baltic Sea and show the consequences of different courses of action using marine modelling. Some of these projects are presented below.

The Nest system was developed in the eight year (1999-2006) program MARE (Marine Research on Eutrophication - a scientific base for cost-effective measures for the Baltic Sea). Sinced the MARE-project ended the Nest system has been maintained and developed by the Baltic Nest Institute.

The system consists of several models, for example BALTSEM and SANBALTS, the large Baltic Environmental Database (BED) and the Data Assimilation System (DAS). Together they generate support for decision-making, and have been valuable in international negotiations between the Baltic countries, as well as used in many research projects. The system is constantly developing.

Nest has played an instrumental role in identifying the nutrient reductions (Maximum allowable nutrient input) necessary to achieve "Good environmental status” in the Baltic Sea as defined by international decision makers in HELCOM. The reduction scheme was adopted in the rescue plan for the Baltic Sea, Baltic Sea Action Plan, by HELCOM in November 2007.

During 2013, the Baltic Sea Action Plan was was renegotiated within HELCOM and the Baltic Sea countries. Decisions included reductions in the supply levels of nitrogen and phosphorus, overall for the Baltic Sea as well as from every country (Country-Allocated Reduction Targets, CART). In this work, the Baltic Nest Institute and the Nest model also played a key role.

The Nest system is freely available online and can be used in an expert mode and a management mode.

More information about the Nest system and the different versions is found here. Information on the technical specifications and how to download the tool click here.

Welcome to contact us to know more and be guided to use Nest!