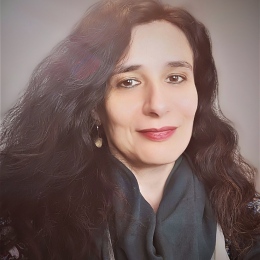 I am a scholar of Eastern Christianity in Late Antiquity and Early Middle Ages. In my research and publications to date I have dealt with a broad spectrum of topics. In my doctoral dissertation, I studied the complex of the relations between ethical behaviour and biblical interpretation on the example of Gnosticism in the context of early Church history and Ancient Judaism, as well as the broader historical context of Late Antiquity. I particularly investigated religiously defined perceptions of the body, sexuality and gender and in particular, questions of how the body can represent a symbolic system according to certain theological beliefs and how sexuality can be manipulated as a means of religious expression.

Another focus of my research lies on the relations of Eastern Christianity with Early Islam and with rabbinic Judaism respectively. I have investigated the cultural, religious and social processes in the Eastern Provinces of the Roman Empire that might have influenced the emergence and spread of Islam. Furthermore, I have examined the relationship between rabbinic and Christian exegetical writings of Late Antiquity in the eastern Roman Empire and Mesopotamia. In this context, I focused on the biblical text as a shared context by which a possible relationship between individuals and communities and their writings can be elucidated.

More recently, I studied the development of apocalypticism and eschatology in the early post-Islamic Christian literature as a specific discourse that allowed for the transmission and circulation of popular religious beliefs and traditions among Eastern Christian communities and also shaped early perceptions of to Islam.

My current research focuses on a comprehensive study of Christian eschatology from the beginnings of Christianity and up to the Middle Ages. It builds up on my previous work on Eastern Christian and Byzantine apocalyptic literature. It aims to conclude my ongoing research work on later Christian pseudepigrapha and eschatology. More specifically, I am currently working on Eastern Christian eschatological texts and traditions that have circulated in Late Antiquity and Early Middle Ages. Ideas about the coming of the end of the world, the Last Judgment, Heaven and Hell have been particularly popular. Still, eschatological concepts in Eastern Christian literature have been little studied. Significantly, little is known on the rather popular concepts on afterlife, as these are expressed in writings of an apocalyptic or visionary character. Descriptions of eschatological visions are often integrated in hagiographical or martyrological literature, as part of out- of- body or after-death experiences of holy men/women, monks or nuns and their adepts, or righteous people in general. Accordingly, tours of heaven and hell can be found mainly in texts of various genres that describe visionary experiences.

A central question of my research deals, in particular, with the representation of the body as a symbolic universe in the context of eschatological visions of that time. The manipulation of the body and its parts dominates the imagery of these narratives and corresponds to theological doctrines related to Christian notions of the body that sins and gets punished or on the contrary, the body that becomes transfigured and beatified. However, there has not been until now a comprehensive socio-anthropological analysis of these notions on account of eschatological narratives. In my work I examine how through eschatological visions, symbolic constructions of the body are expressed and how theses influence Christian thinking and literature.

Finally, I seek to identify ‘popular’ eschatological beliefs that circulated in Christian society beyond (or along with) the official theological guidelines of the Church. Relations with the popular theology of their time, as well as with liturgy and iconography are also considered.

The analysis includes examination of eschatological texts and traditions in the context of various cultural and linguistic communities, in which they circulated, such as Greek, Coptic, Syriac, Arabic, Ethiopic, etc. Accordingly, it addresses paths of communication as well as the exchange of ideas that was taking place between the various groups and communities in the Christian world.