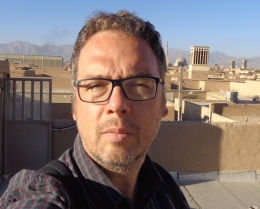 Dr. Isa Blumi joined Stockholm University in late 2015 after spending the previous 12 years teaching and researching at universities located in Germany, Belgium, Turkey, the USA, United Arab Emirates, Switzerland, and Albania/Kosovo. Over these years, Dr. Blumi has mentored students and directed MA and PhD projects. Several of these former students currently teach at Spelman College, UC-Davis, Princeton, Yeshiva, Iowa State, and the University of Amsterdam. Since joining Stockholm University, Dr. Blumi has mentored four graduate students who have successfully defended their PhDs at the Universities of Geneva, Copenhagen, Amsterdam, and Antwerp. Currently, Dr. Blumi is supervising the PhD projects of students attending the Departments of History at UCLA and UC-Davis, Gender Studies at SOAS, along with MA students at Stockholm University's Middle Eastern Studies program. Former students at the Department of Asian and Middle Eastern Studies under Isa Blumi's supervision have since moved into PhD programs in Social Anthropology at Stockholm University, Arab History at the American University of Beirut, and Anthropology and Sociology at the Graduate Institute in Geneva. Here is a list of student supervision and their current positions:

• “Al-Shabaab and Civility: Ideological Dynamics in Violence against Civilians in the Somalia Conflict,” Department of Asian and Middle Eastern Studies (Stockholm University) MA Supervisor, in progress.

• “The US in the Middle East during the Cold War: Ba‘athist and Pan-Arab Resistance Stories,” Department of History (University of California-Davis) PhD Co-Supervisor, in progress.

• “Interpreting the Qur‘an in the Modern Era: The Qur‘anic Hermeneutics of the Qur‘an Alone Movement in Egypt,” Department Asian, Middle Eastern, and Turkish Studies (Stockholm University) PhD Co-Supervisor, in progress.

• “Investigating the Post-colonial and Occidentalist Features in Discourses Dominating Iranian Novels during the 1960s through 1980s,” (Department of Arts, University of AlZahra, Teheran, Iran), external member of committee, in progress.

• “Difference and the Rise or Fall of Multiculturalism in Europe,” Civilization Studies, Fatih Sultan Mehmet University, external member of PhD committee, in progress.

• “Structured Agencies of the Paramilitaries in the Turkish-Kurdish Conflict,” Department of Cross-Cultural and Regional Studies, (Copenhagen University) Co-Supervisor, (defended June 2021).

• “The Presence of the Other in Iranian Novels and Films on the Subject of the Iran-Iraq War,” (Department of Arts, University of AlZahra, Teheran, Iran), external member of committee, defended, May 2018. Currently Post-doc fellow, University of Teheran.

• “Trial by Fire: Ottoman Nationalism in Transition from Empire to Republic, 1908-1926,” Department of Cross-Cultural and Regional Studies, University of Copenhagen, (Defended September 2016).

• “Under the Moon and the Stars: The Impact of the First World War on the Eastern Sephardic Community in Antwerp (1879-1930),” (Department of History, University of Antwerp and Poshumus Institute Leiden), Supervisor, defended May 2015. Currently PhD-Candidate, Urban Studies, University of Antwerp.

•  “Sit In, Stand Up and Sing Out! Black Gospel Music and the Civil Rights Movement,” Georgia State University, History Department (Second Advisor: MA 2012). Has been download more than 15,000 times.

Dr. Blumi teaches courses in the Department of Asian and Middle Eastern Studies. Courses include

Politics and Development of the Middle East

An Introduction to the Middle East

Human Rights in the Middle East

• “Stages of Global Migration: Ottoman Refugees and the World they Helped to Make, 1870-1970,” ACMES Annual Lecture, University of Amsterdam, 12 April 2022 (The Netherlands). https://acmes.uva.nl/events/acmes-annual-lecture/annual-lecture-2022.html?cb.

• “Awaiting their Turn: Ottoman Europe’s Çam/Çamë and the Delusions of Transitional Order, 1910-1923,” Narrating Exile in and Between Europe and the Ottoman Empire/Modern Europe, University of Amsterdam, 12 November 2021 (The Netherlands).

• “Lost in Transition: Obscuring the Arab Caliph and its Consequences after Lausanne,” Workshop: The Forgotten Peace?  The Lausanne Conference and the New Middle East, 1922-23 funded by University of Southampton and University of Utrecht, 30 June 2021 (Paris, France).

• “Unsettling the Rewriting of History: An Exercise in Unreading History,” presented for seminary series “Unsettling Knowledge” within the Decolonization Group at Utrecht University, 4 February 2021 (Utrecht, The Netherlands).https://www.youtube.com/watch?v=YdhCE58DK-4&ab_channel=DecolonisationGroup.

• “Cultivating Knowledge, Sowing Destruction: North Atlantic Scholarship during the Cold War, the cases of the Balkans and South Arabia” presented to US Think Tanks and Foundations in World Politics: The Nexus of Knowledge and Power webinar, Department of International Studies, City University of London, 4 December 2020 (London, UK).

• “The Lens of Modernity: Rethinking Europe’s Engagement with Muslims in the Balkans,” invited lecture hosted by Center of Global Studies, Philosophy Institute of the Academy of Sciences of the Czech Republic, 30 June 2020 (Prague, Czech Republic).

• “Infringements of History: Borders and the International Regime of Regulated Mobility: The Cases of Yemen and Albania,” Institut d’Histoire, University of Neuchâtel, December 12, 2018 (Neuchâtel, Switzerland).

• “Why Yemen’s Ruin: How to Study Capitalism’s Artifices of History,” presented at UC Davis, Department of Religious Studies and History Department “Notes from the Field” series, November 13, 2018 (Davis, Ca. USA).

• “Arabian Spillage: Chaos in Arabia and its Impact on the Larger Region,” PRIO Cyprus Centre and the Friedrick-Ebert-Stiftun Cyprus sponsored roundtable- “National, International and Human Security in the Eastern Mediterranean,” 16 November 2017 (Nicosia, Cyprus).

• “Transitional Regimes and the Staggered Rise of the Ethno-national/Sectarian Citizen in Arabia and the Balkans, 1900-1939,” Department of History, Oslo University, 30 August 2017 (Oslo, Norway).

• “Settling Globally: The Logistics of History and the Consequences of Refugees,” Department of Sociology, Corvinus University, 1 September 2017 (Budapest, Hungary).

• “A Genealogy of War and the Future of Arabia,” CMES Seminar, Lund University, 7 December 2016 (Lund, Sweden).

• “’Don’t We Have Enough Problems?’ When Kosovo Exports its Crisis” Presented to The Many Roads in Modernity Series, Copenhagen University, 25 August 2016 (Copenhagen, Denmark).

• “Return to the Land: Identifying the Origins of the Modern Gulf from its Ottoman Hinterland,” New York University-Abu Dhabi, Department of International Studies, 7 May 2016 (Abu Dhabi, United Arab Emirates).

• “What is Happening in Yemen?” Open Talk hosted by The Student Council at the Department of Asian, Middle Eastern and Turkish Studies, Swedish MENA Association and MENA Magazine, Stockholm University, 18 March 2016 (Stockholm, Sweden).

• “Muslims in a Global Struggle; Albanians and the Global Jihad,” guest lecture in Trials of the Ummah-Muslims in the Balkans Today Series, 3 December 2015, Centre for Southeast European Studies, University of Graz (Graz, Austria).

• Invited Discussant: Urban Agency? Towards a New Urban History of Europe since 1500, 28 May 2015, University of Antwerp, (Antwerp, Belgium).

• “Productive Violence: The Transitional Histories of Western Balkan Komitadji Resistance to the State: 1878-1930,” Round-table: The Age of the Komitadji, held between 22-24 January, 2015, at University of Basel (Switzerland).

• Keynote Address: “The Occupation Effect: The Consequences of Occupation Regimes in the Balkan Territories of both the Habsburg and Ottoman Empires, 1916-1925,” for Conference: The Collapse of Ottoman and Austria-Hungarian Empires: Patterns and Legacies, Ludwig Boltzmann-Institute for Social Science History and the Institute for East European History at the University of Vienna, 16 January 2014 (Vienna, Austria).

• Co-organizer of International Workshop “Representing Migration: The Legacy of Post-Imperial Migrations from World War I to the Cold War,” Ludwig Maximilians University, January 29 and 30 (Munich, Germany).

• Co-organizer of International Symposium “Islamophobia in Europe,” funded jointly by the Center for Balkan and Black Sea Studies (BALKAR) of Yıldız Technical University and IRCICA, January 13 and 14, 2017 (Istanbul, Turkey).

• Co-director/organizer of conference: The First World War and its Heritage held between November 6-8 at Çanakkale March 18 University, (Çanakkale, Turkey).

Isa Blumi researches societies in the throes of social, economic, and political transformation. In the past, he compared how Austro-Hungarian, Russian, Italian, British, Dutch, Spanish, and French imperialist projects in the Islamic world intersected with, and were thus informed by, events within the Ottoman Empire. His latest work covers the late Ottoman period and successor regimes, arguing that events in the Balkans and Middle East are the engines of change in the larger world. In this respect, he explores in a comparative, integrated manner how (post-)Ottoman societies found in, for instance, Albania/Yugoslavia, Turkey, the Gulf, and Yemen fit into what is a global story of transition. This in turn informs the story of the Atlantic world, especially the emergence of modern European imperialism and the Americas.

As he expands his work to include more of the 20th century, Blumi explores processes of change induced by Muslim refugees/migrants who settle throughout the world. These diasporas from the (post-)Ottoman world prove instrumental to the kinds of imperialist projects emerging by the 20th century. His recent publications reveal such complex interactions between Albanians, Armenians, Arabs, Turks, Greeks and, be they Dutch/French/Spanish/American administrations in the South China Sea, or the British and Italian colonial regimes in Eastern Africa.

One of his current research projects investigates how Muslims and Christians of the former Ottoman Empire navigated the processes by which the Caliphate is ultimately eliminated in 1924 under European (Dutch, British, French, and Italian) imperial pressure. Blumi is also exploring how unsettled peoples in the Horn of Africa, Arabia, and the Balkans shaped the policies of managing nature along borders separating competing imperial polities (Italian, English, and French) throughout the 19th and 20th centuries. A third project explores how subsequent generations of refugees assimilated into their new host environments in the Americas, especially the industrial cities of Detroit, Veracruz, Buenos Aires, and Boston prior to World War II.

Finally, reflecting an interest in the Cold War, Blumi is additionally working on understanding how Muslims from throughout the world contributed to the Cold War with special focus on the interactions between the Lusophone World (in the context of the anti-colonial wars in Mozambique, Angola, Guinea-Bissau, Timor, and Cabo Verde) and communist parties in Portugal, Italy, Brazil, Turkey, Syria, Yemen, Albania, and Yugoslavia.

Exploring such interactions through this global perspective helps us question how we understand modern identity and social organization, themes Blumi focuses on in the courses he teaches. In addition to his historical research, Blumi also regularly writes and lectures on contemporary Balkan and Middle Eastern politics (especially Kosovo, Turkey and Yemen) and political Islam in relation to Europe.

Dr. Blumi is currently collaborating on a number of international, interdisiplinary research projects:

"Many Roads in Modernity: The Transformation of South-East Europe and the Ottoman Heritage from 1870 to the Twenty-first Century," (Funded by the Carlsberg Foundation and hosted by the Department of Cross-Cultural and Regional Studies, University of Copenhagen) (see link provided).

“Global Environmental Borderlands in the Age of Empire,” Jointly Sponsored by the William P. Clements Center for Southwest Studies at Southern Methodist University and Stanford University.

Dr. Blumi has also been previously involved in the following completed research projects while a member of Stockholm University's Faculty:

Project Coordinator with Professor Dr. Mehmet Hacısalihoğlu, “Islamophobia in Europe: Past and Present,” funded jointly by the Center for Balkan and Black Sea Studies (BALKAR) of Yıldız Technical University and IRCICA, (Turkey, 2017).