Tarfala research station is one of the world's most beautiful workplaces, but also one of the most challenging. Nina Kirchner, new director of Tarfala, recently returned from the spring fieldwork season. Now, the next phase will begin, in which the research data is analysed.

”The first thing I’ll do now I’m home will be to try to make up for lost sleep! There have been a lot of long working days, and it is only when you get home that you notice how tired you really are”, says Nina Kirchner.

What does it mean to be the director of Tarfala?

”It's easy to be captivated by the environment and attracted by the adventure of being there, but we actually have a mission to accomplish. In order to be able to carry out an assignment at a field station in an Arctic alpine environment, in addition to the research itself, it is important to ensure that you have a well-functioning team. We live and work at the station for several weeks, which means that we share all tasks, even those that are outside the job itself, such as cooking and cleaning. I am an early bird, so for me it is natural to make breakfast while the others continue sleeping.”

What do you do on a normal day?

”The days are packed. In the early spring we measure the winter mass balance, i.e. how much snow has accumulated since the end of summer 2020, on four glaciers: two close to the station, Storglaciären, and Rabots glaciär, and our ”remote glaciers” Mårma and Riukojietna. The weather determines when we can be out, and for how long, and we need to be very flexible and work when we have the opportunity. We always have a plan B, C, D, E and F to be able to make the best of each day.”

Annika Granebeck och John Nilsson measuring how much snow has accumulated since the end of summer 2020. Photo: Markus Karasti

”Mass balance measurements at Storglaciären have a long history and hold the record for the world's longest series of mass balance measurements, ongoing since 1946. We have also downloaded data from our time-lapse camera that monitors the ice cover on Lake Tarfala. At the moment the ice is compact, but we are interested to know when the ice breaks up in late spring and when the lake freezes over  in the autumn.”

What are the biggest challenges of Tarfala as a workplace?

”Whenever we arrive the station must be put into operation. This means for example getting running water—this year a pipe had cracked due to the cold—to digging out containers from the snow to access stored equipment. We are just a few people who live and work together in a very isolated place, so we are dependent on each other.”

”Another thing that is both good and bad is the unstable internet connection. In a way it is nice to avoid the constant influx of email, but it's not as nice when the connection crashes during an important link meeting.”

What is the best thing about Tarfala?

”The best thing for me is the unique opportunity to conduct research in a place that can be compared to a time machine, where we sadly experience the climate scenario of the future much sooner than elsewhere. According to IPCCs ”Special Report on the Ocean and Cryosphere in a Changing Climate” report, 80 percent of Sweden's glaciers may have disappeared by 2100, if the release of greenhouse gases continues along the buisness as usual trajectory. In Tarfala this is already visible. But the lessons and insights we can draw from Tarfala can hopefully be used in other places where the changes are not as fast.”

”It is important that our results reach a much wider audience. Annika Granebeck, who is our field safety expert, also takes care of a lot of our science communication. Luckily Tarfala is a ”bestseller”. People want to read or hear about the mountains, glaciers and Kebnekaise, so there is great interest from the general public.” 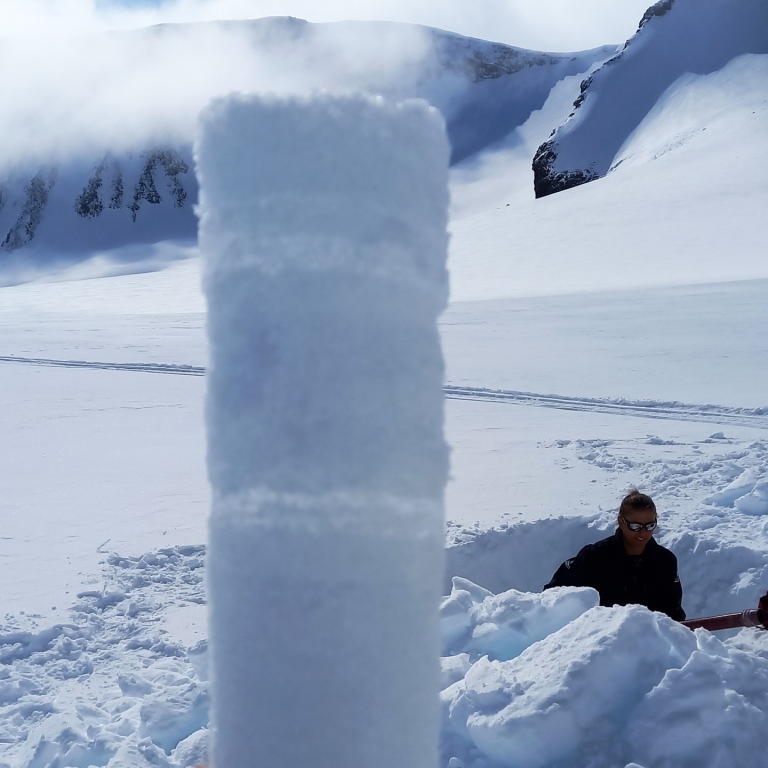 Do you have a special memory from this season?

”Pelle Holmlund, who is the deputy director, and I have just taken over the running of Tarfala, after the previous director Ninis Rosqvist. Simply the fact that this is our first season makes it special. Additionally, the fact that it was successful, despite the corona pandemic, makes it memorable. We also had the fun task of reporting on the field season on a daily basis via short emails to a number of donors who contributed funds earmarked for the research at Tarfala. For me this shows that what we do is important to many others.”

How did the pandemic affect the situation?

”We were not allowed to have any guests, only Stockholm University staff. Fortunately, everyone who was at the station this season had confirmed antibodies, which helped us to complete the field season.”

What did you do in the snowstorm?

”The film clip is from an attempt to dig out the containers to access the equipment we needed. In order not to waste time digging when the weather was good enough for research, we tried to optimize time. But there was so much snow that we had to give up in the end.”

”Our technician Markus Karasti did an amazing job of filming our work, despite not seeing what he recorded. It is good to be able to show something other than sunny images of sparkling polar environments. This reflects more the reality we face: Tarfala holds the record for the highest measured wind speed in Sweden, at 81 m/s – so yes, it can be windy. In such weather we have to stay at the station no matter how eager we are to obtain research data.”

”Yes, I would like to thank the management at the department and the University for their support. Without you, it would not have been possible to complete this year's season during the corona pandemic.”

Coffebreak on the roof with Markus Karasti and Annika Granebeck. Photo: Nina Kirchner

Nina Kirchner is director of the Tarfala research station and the Bolin Centre for Climate Research. She also leads the research group ”Geomorphology and Glaciology”, at the Department of Physical Geography.

Tarfala research station is owned and operated by Stockholm University. The station is located at 1135 meters above sea level in the Tarfala Valley, on the east side of Kebnekaise. In the valley there are four glaciers, of which the Storglaciären is the most famous and one of the most studied glaciers in the world. Tarfaladalen covers the altitude range between 800 and 2096.8 meters above sea level and consists of a typical subarctic high alpine environment.

The Bolin Center for Climate Research is a multidisciplinary consortium with over 400 researchers in Sweden who carry out research and education on the Earth's climate.