Unravelling the mystery of dead elk in southern Sweden

Numerous dead elk (moose, in North America) keep cropping up in southern Sweden. Researchers at the Department of Applied Environmental Science launched a new study into this worrying trend and hint towards thiamine (vitamin B1) deficiency syndrome as a likely culprit. 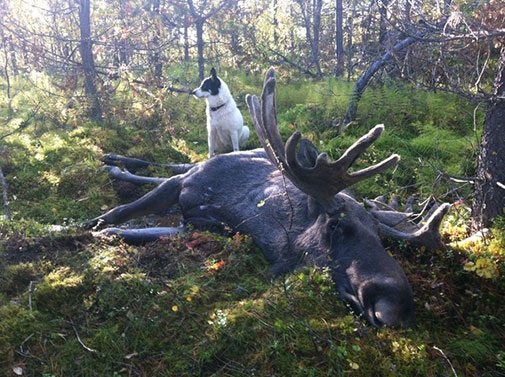 Roughly 30 elk turn up dead from various diseases across Sweden every year. But last year as many as 80 dead elk were found in the region of Blekinge, South Sweden, alone.

“We've seen it all before,” says Lennart Balk, Associate Professor at the Department of Applied Environmental Science. An unprecedented number of deaths has previously been observed in fish and bird populations. “The increased deaths among fish, birds and now moose and other mammals is one of the most serious environmental disturbances we have seen in decades,” continues Lennart Balk, who, for the past 10 years, has been studying how thiamine deficiency has wreaked havoc with population numbers and behaviour among seabirds out in Blekinge Archipelago, South Sweden.

Thiamine is essential for living cells. All organisms use thiamine, though only bacteria, fungi, and plants can synthesise it. For that, animals and humans must get thiamine through diet. Thiamine in its phosphorylated form acts as a cofactor for several life sustaining enzymes, which cannot function without it. Thiamine is also necessary for the proper functioning of the nervous-, immune- and reproductive systems. In humans, a lack or deficiency of thiamine causes weakness, fatigue psychosis, and nerve damage.

In 2009, in a paper published in Proceedings of the National Academy of Sciences, Lennart Balk and his group showed a strong relationship between thiamine deficiency, excess deaths and breeding failure in many bird populations. “We showed this in three different ways. Firstly, we successfully treated sick birds by injecting pure thiamine into them. Secondly, we found lower amounts of thiamine in the brain, liver and eggs of dying birds than we did in healthy controls. Lastly, we showed reduced activity of thiamine-dependent enzymes in liver and brain of dying birds while the proportions of ‘empty’ enzymes (enzymes without the thiamine cofactor) were increased,” says Lennart Balk.

But how can thiamine depletion come about? According to Lennart Balk, there are three “scenarios” that could play out. “Thiamine deficiency can result from shortage of thiamine in the food, decreased uptake or increased consumption of thiamine, and of course any combination of these,” says Lennart Balk. At present scientists do not have a definitive answer as to which scenarios apply to the animal populations in question.

“We live in an extremely complex world when it comes to types and numbers of chemicals we release to the environment. At the same time, there are natural biogeochemical processes which when altered could also cause this disturbance. We are working towards solving this puzzle because we want to understand the mechanisms behind our field observations,” says Lennart Balk.

Now Lennart Balk and his group have turned their attention to the rising number of dead elk reported in the Blekinge region. “Our best hypothesis is that excess deaths among elks in Southern Sweden may be linked to thiamine deficiency just like that we observed in birds. We need to collect more samples for biochemical analyses before we know for sure,” says Lennart Balk.

Meanwhile the efforts of the researchers did not go unnoticed. King Carl XVI Gustaf, in a ceremony held recently at the Bernadotte Library inside the Royal Palace attended by 200 persons, personally awarded a special stipend to the Department of Applied Environmental Science for the “exceptional and admirable work” it conducts in this research area. Per-Åke Hägerroth, a researcher in Lennart Balk's group, accepted the stipend on the department's behalf and gave a talk on thiamine deficiency in the environment.

The researchers hope to publish the results of their study in the winter of 2013-14.