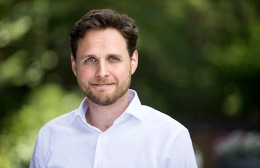 My interests are broad and varying with time but I am particularly faschinated by the world of quantum mechanics, in particular the by collective behaviour of many particles under extreme conditions, their exuberant phenomenology and possible impact on future technology.

With the help of the Wallenberg Academy Fellows program, I returned to my alma mater Stockholm University in 2016 after eight years abroad -- as a Distinguished PKS fellow at the Max Planck Institute for the Physics of Complex Systems in Dresden and as an Emmy Noether Group Leader at the Free University of Berlin.

I was awarded the 2022 Göran Gustafsson Prize in physics by the Royal Swedish Academy of Sciences with the motivation ”for his innovative research on topological phases and quantum materials. He has made significant and recognized contributions to the theory of low-dimensional materials, specifically to the description of open and dissipative topological phases in terms of non-Hermitian topological models."

Our research brings together several frontiers of basic science, while at the same time having the potential to provide the basis of future technological advances such as robust “topological quantum computers”