Members of the jury

The prize selection processes are conducted by a jury, an independent international body that selects and appoints the prize recipient(s) from the nominations submitted.

The jury consists of distinguished criminologists and practitioners of criminology, such as internationally recognised scholars and law enforcement officials and former prize recipients. The jury has chosen Lawrence Sherman and Jerzy Sarnecki to co-chair the jury.

Nominations for the jury to consider will be invited from universities, criminological associations and others.

In addition to the jury there is the Stockholm Prize in Criminology Foundation for strategic decision-making and financial management. The Foundation decides on donor-related and financial issues.

The Stockholm Prize in Criminology - Rules of Procedure (121 Kb) 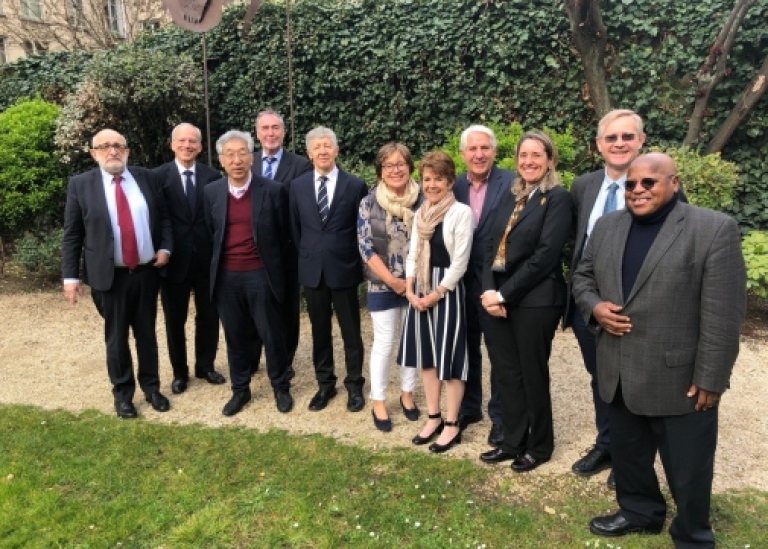 Beatriz Abizanda is a modernization of the state senior specialist in Inter-American Development Bank’s (IDB) citizen security practice, the largest source of multilateral funding in Latin America and the Caribbean. She is responsible for the oversight of the design and the implementation of Bank-funded crime prevention, police and prison reform projects in Costa Rica and Uruguay, totaling US$238 million.

Beatriz is the co-author of the Inter-American Development Bank’s conceptual framework for citizen security, the IDB’s operational guidelines for the sector and a contribution to the World Bank’s 2011 World Development Report.  Prior to her postings in Costa Rica and Uruguay, Beatriz worked in the design of security programs in Colombia and Belize, as well as trade facilitation programs in Central America. Before joining the IDB, Beatriz worked as an economist and as an analyst for Spain’s commercial service in Mexico City and Chicago, and as a financial planning analyst for IBM.

Susanne Karstedt is a Professor in the School of Criminology and Criminal Justice at Griffith University, Australia. She held Chairs in Criminology at Keele University and the University of Leeds, UK, and positions at the Universities of Hamburg and Bielefeld, Germany.  Her research has a strong focus on cross-national and cross-cultural comparisons of both crime and justice, where she explores democracy and its values and institutions in relation to violence, corruption, state crime and prison conditions. Other research interests include atrocity crimes and transitional justice, and she is widely known for work on emotions, crime and criminal justice. She has published more than 20 books and journal issues, and 200 articles in journals and edited collections on a range of topics, both in English and German.  She has been the President of Scientific Commission of the International Society of Criminology, and has served on Research Councils in Belgium and Germany. She was an editor of the British Journal of Criminology, and of Criminology and Criminal Justice, and is a member of  numerous editorial boards.

Candace Kruttschnitt is Professor of Sociology at the University of Toronto and a Fellow of the Royal Society of Canada. The 2015 President of the American Society of Criminology, she is a renowned scholar of crime and justice issues affecting women, including crimes against women and women in prison. She received her B.A. in criminology from University of California at Berkeley and her Ph.D. in sociology from Yale University. She taught at the University of Minnesota before coming to the University of Toronto. She is the author of Marking Time in the Golden State: Women’s Imprisonment in California (with Rosemary Gartner, 2005) and Gender and Crime: Patterns in Victimization and Offending (with Karen Heimer, 2006). Her current research encompasses work on female offenders and comparative penology. Kruttschnitt was a visiting fellow at the University of Helsinki, Cambridge University, the Vrije University Amsterdam and the Netherlands Institute for the Study of Crime and Law Enforcement. She Co-Chaired the National Academy of Sciences Panel on Measuring Incidences of Rape and Sexual Assault in the National Criminal Victimization Household Surveys of US residents.

Friedrich Lösel is Director of the Institute of Criminology at Cambridge University (UK) and Professor of Psychology at the University of Erlangen-Nuremberg (Germany). He has carried out research on juvenile delinquency, violence, offender treatment, prisons, football hooliganism, school bullying, personality disorders, resilience, developmental prevention, and program evaluation, and published more than 20 books and 320 articles/chapters on such topics. He has been Founding President of the European Association of Psychology and Law, a member of the Anti-Violence Commission of the German Government, President of the Criminological Society of the German-speaking countries, and chair of the Correctional Services Accreditation Panel of England and Wales. He is a member of the steering committee of the Campbell Crime and Justice Collaboration and a Fellow of the Academy of Experimental Criminology.

For his scientific work he has received the Sellin-Glueck Award of the American Society of Criminology, the Award for outstanding achievement of the European Association of Psychology and Law, an honorary Doctorate, the German Psychology Prize, and in 2006 the Stockholm Prize in Criminology.

Tiyanjana Maluwa is the H. Laddie and Linda P. Montague Professor of Law and Associate Dean for International Affairs at the Dickinson School of Law, and concurrently Director of the School of International Affairs, Pennsylvania State University, USA. He has been legal counsel for the Organization of African Unity (now African Union) and the Office of the United Nations High Commissioner for Human Rights, where he was involved, inter alia, in providing advice and developing policy on issues relating to human rights and international criminal justice. He has published extensively on various aspects of international law and international human rights. He serves on the editorial boards of a number of learned journals and is a member of various international professional associations and learned societies.

Dr Peter Neyroud is Director of the Senior Leader master’s degree Apprenticeship in Applied Criminology and Police Management and a Lecturer in Evidence-based policing in the Jerry Lee Centre for Experimental Criminology at the Institute of Criminology, University of Cambridge. In 2018 he completed a PhD at Cambridge which focused on the implementation of field experiments in policing. His research focuses on experimentation, police diversion of offenders, crime harm, police ethics, community policing, the impact of COVID 19 on policing and police leadership and management.

He was a police officer for more than 30 years, serving in Hampshire, West Mercia and Thames Valley (as Chief Constable). He set up and ran the National Policing Improvement Agency (as Chief Constable and Chief Executive). In the latter role he was responsible for national implementation of all the major programmes in UK policing, including Neighbourhood Policing, Workforce reform and new technology.

In 2010, he was commissioned by the UK Home Secretary to carry out a fundamental “Review of Police Leadership and Training” which led to the establishment of the new National “College of Policing” in 2012 and radical reform of the qualifications and training of police officers, creating the new “Police Education Qualification Framework”.

He is the Co-Chair of the Campbell Collaboration Crime and Justice Coordinating Group and leading an international programme of systematic reviews on the prevention of terrorism and radicalization. He was awarded a Queens Police Medal (QPM) in 2002 and a Commander of the British Empire (CBE) in 2011 for services to Policing.

Professor, habilitated doctor (Law/Criminology); Doctor honoris causa, Dean of the Faculty of Law (2012-2019), University of Bialystok (Poland); Director: Department of Criminal Law and Criminology. He is the author of more than 480 publications (in Poland and abroad), a dozen of them are monographs. His research interests include organized crime, money laundering, corruption, criminal policy, public security issues, human rights ans sustainable development. In 1997 he won the Distinguished International Scholar Award of the International Division of the American Society of Criminology. On numerous occasions he was a guest lecturer or a visiting professor at many universities in 22 countries, mostly in Germany, Japan, Switzerland, and the United States of America. In the years 1994-2012, he represented Poland in the International Examination Board of the Central European Police Academy (MEPA). Since 2001 he has been serving as a United Nations consultant for the implementation of the project “Assessement of Organized Crime in Central Asia”. Since 2005 he has been the Chief Coordinator of the Polish Platform for Homeland Security (PPHS). Since 2017, Director of the International Centre of Criminological Research and Expertise, at the University of Białystok. He is also Full Professor at the Higher School of Police Training (Polish National Police Academy) in Szczytno, and elected Chair of the Scientific Board of the Professor Jan Sehn Institute of Forensic Expertise in Kraków (Poland).
Full CV Emil W Plywaczewski (418 Kb)

Jerzy Sarnecki is Professor in General Criminology at the Stockholm University. He is past President of the Scandinavian Research Council for Criminology and past Head of Department of Criminology. He is the author of numerous books and articles on delinquent networks, studies on juvenile delinquency and textbooks in criminology.

Sarnecki is director of the project "The Stockholm Boys: Life Courses & Crime in the Swedish Welfare State Through Half a Century". He is serving as an expert on several scientific panels and committees in Sweden and internationally. Among others, he is a member of the Scientific Council for the Swedish National Council for Crime Prevention and the Swedish Prison and Probation Service.

Hiroshi Tsutomi is the Professor of Faculty of International Relations at the University of Shizuoka, Japan, and served as former Editor-in-Chief of the Japanese Journal of Sociological Criminology. He has been interested in testing delinquency theories and assessing effectiveness of criminal justice interventions. He is also a director of an nonprofit organization organizing former juvenile school inmates.

Professor Weisburd is an elected Fellow of the American Society of Criminology and of the Academy of Experimental Criminology. He is a member of a number of prestigious national and international committees including the Scientific Advisory Committee of the Office of Justice Programs, the Campbell Crime and Justice Group (as Chair); the Harvard Executive Session in Policing; and the US National Research Council Committee on Crime, Law and Justice. He also serves as a Senior Fellow at the Police Foundation in Washington DC, and Chairs its Research Advisory Committee. Professor Weisburd is the recipient of the Joan McCord Award from the Academy of Experimental Criminology (2008), the 2010 Stockholm Prize in Criminology, and the Klachky Family Award for Advances on the Frontiers of Science (2011). He is author or editor of 20 books and more than 100 scientific articles. He is also the founding editor of the Journal of Experimental Criminology.