Language: English.
Registrations until the 22th of May: clpestocolmo@gmail.com
This walking performance, that captures the experience of a distant place, will be presented in Stockholm in 2022.

The Portuguese director and performer Paula Diogo invites students from the Department of Culture and Aesthetics of Stockholm University and students interested in Portuguese culture to talk about TERRA NULLIUS Project. Portuguese writer Jacinto Lucas Pires will moderate this conversation.

"Terra Nullius" was a term created by international law to define territories that belonged to no one and therefore could be occupied. Even today there are Terra Nullius territories such as: Bir Tawill (a strip of land between Egypt and Sudan), Antarctica, the international sea and the Moon. But Terra Nullius also has a poetic meaning. An idea of unexplored territory, a kind of oasis of freedom where it would be possible to start over and rethink our idea of society.

For a year, Paula Diogo was in Reykjavik developing a project that tried to capture an ‘experience of the place’ by crossing it with personal and collective narratives. As a procedure she used two simple actions: walking and writing. The result is a performance that overflows the space of the theater, occupies geography, urban territory and virtual space for discussion and thinking.

More information about the project: http://ma-criacao.com/portfolio/terra-nullius/

TERRA NULLIUS, by Paula Diogo, is a theatre play, an intimate documentary, an account of a trip, a political essay, a voice that makes cinema out of our walking, all of these simultaneously, or none of that exactly? An audio piece that is juxtaposed to a certain path ‒ as a way of explaining the movement of ideas, as an exercise to make the body think? A piece that in order to become whole has to create its own “no man's land”. But how will that place be built? Jacinto Lucas Pires (writer). 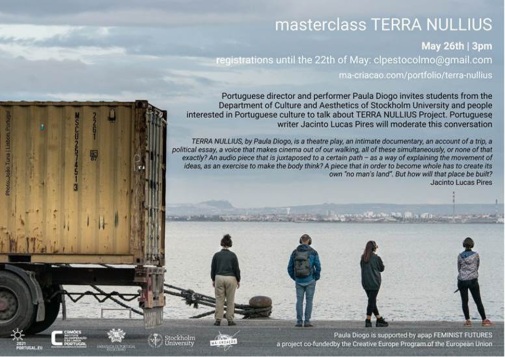 Born in 1977 in Lisbon (Portugal). She is a performer and stage director with an artistic background based on collaborative processes. She has been meandering through art-making and producing in recent years. She holds a Bachelor’s Degree in Training of Actors / Directors by the ESTC in Lisbon, and a Master’s in Performing Arts by the LHÍ (Icelandic Academy of Arts) with grants from the Calouste Gulbenkian Foundation and the GDA Foundation. She was the co-founder of several collectives, such as Teatro Praga (1995-08), TRUTA (2003-10) and O Pato Profissional Lda (2003-10). In 2004 she was distinguished by CPAI with the Teatro na Década Award – Best Actress for the performance Private Lives, by Teatro Praga. In 2006 she received a grant from the National Centre of Culture to follow the work of Gob Squad (UK / DE) in Berlin. In 2007 she attended the Staging Course of the CCA Program at the Calouste Gulbenkian Foundation, with the British company Third Angel. In 2006 and 2013 she was invited by the choreographer Rui Horta to take part in Colina-Collaboration in Arts in Aarhus and Tryangle in Dusseldorf, two collaborative meetings between artists from different backgrounds. In 2010 she was a resident director at the Teatro Nuovo in Naples, Italy, under the artistic direction of Antonio Latella. She has worked with several artists and companies over the years in Portugal and abroad. In recent years she has been consolidating Má-Criação, a platform that brings together creators from different artistic and geographical backgrounds. She is also part of Celestial Bodies, a recent project dedicated to opening up spaces for exploring meanings and practices of solidarity, care, empathy, and wonder. She is an APAP associated artist (2021-2024). She lives in Lisbon.