Frank Wilczek: "The pandemic has been positive for my research in many ways"

Frank Wilczek is professor of theoretical physics and Nobel laureate. He usually spends his time in different parts of the world, including at Stockholm University where he is professor. Last year has been quite challenging because of the pandemic. But it has been positive for his research in many ways.

Frank Wilczek usually spends his time in different parts of the world. He spends several months at Stockholm University and also at the Massachusetts Institute of Technology, MIT, both places where he is a professor. He also normally makes time to visit the physics institute in Shanghai, China, which bears his name, and Arizona State University, where he teaches and develops products. Last year, it has been quite different as he hasn’t been able to travel at all.  Instead, he stayed put at his home in Concord, Massachusetts. However, when asked about how the pandemic affected his research, he is not as negative as one might think. “In many ways it´s been positive for my research. There are always side-effects with moving from one place to another, and those are gone.  For my peace of mind and focus, that’s been addition by subtraction. I’ve still been able to keep up collaborations online and I have regular meetings with my research groups in Stockholm. I do miss human contacts though.” 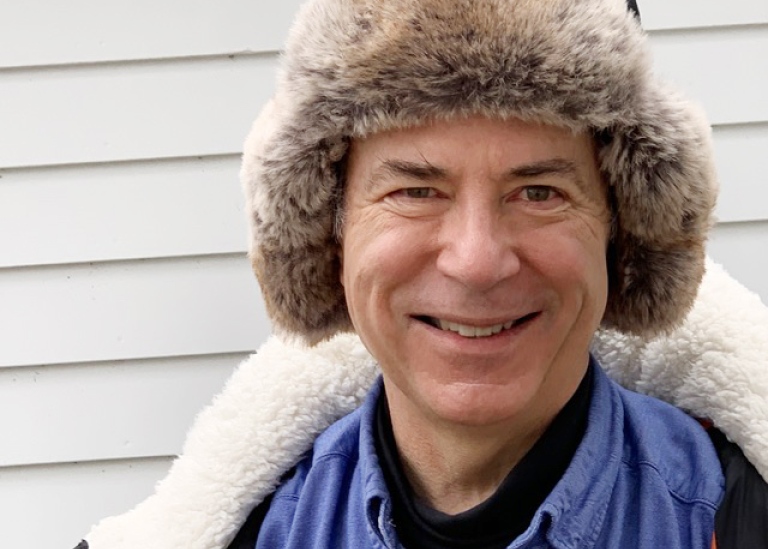 Frank Wilczek at home outside his new house.

While juggling both research and teaching online, he finished writing a book last spring, entitled “Fundamentals – Ten Keys to Reality” (Penguin Press), and he participated in events to promote it.
The book is meant for “curious people who want to explore how the world works, fundamentally.” In it, he lays down ten fundamental principles and gives the scientific foundation for those principles. His purpose is to explain the fundamentals of science while also combatting certain anti-scientific sentiments. “More than anything I have done before, this is a book aimed at the general public, and I hope it reaches a large audience.”

But the core of what he does is always research, and he has several ongoing projects. “The big project that has most momentum is an ambitious collaboration helping experimenters and engineers design antennas that would be able to detect axions, a hypothetical elementary particle that might provide the cosmological dark matter.” Physicists have very clear ideas about what the particle is, so if they see it, they will recognize it. The project has reached the stage when it is time to build prototypes, and the group hopes to have results within 5-10 years. “If successful it would be one of the greatest discoveries ever, so say we have 25 percent chance of making it in 10 years – half that we’ll be clever enough, and half that Nature will cooperate -- that is still pretty good.”

Grew up in a working-class family

Frank Wilczek’s story starts in Queens, New York, where he grew up in a working-class family with roots in Europe. His parents were children of the Great Depression from Long Island and had limited access to resources, but that didn’t stop them from working to educate themselves. Frank’s father was a self-taught engineer and passed his interest in technology and science on to his son.

The late 50s and early 60s were an ambivalent time for science, seeing both the destructive power of the atom bomb and the potential for ever-more sophisticated technologies, with space exploration capturing people´s imagination.
“As children, during the Cold War era, our interest in science and technology was strongly encouraged, as a national priority.”

Frank Wilczek excelled at the public school he attended and his top grades won him a scholarship to the University of Chicago. His studies included neuroscience and philosophy, but soon mathematics caught his attention and he decided to take graduate degree in the subject at Princeton. Once there he changed his sights to physics and started working under David Gross. In just a few months, Frank, alongside David Gross, published a ground-breaking article that would earn him some of the world’s most prestigious scientific prizes, including the Nobel Prize in 2004. He shared that prize with David Gross and David Politzer.

Frank Wilczek described Nobel Week in one word – magical – and very different from what he had imagined. He had an inkling that he might win the prize someday, of course, but was surprised when it happened.
“It was an experience that changed my life.”
The prize opened many doors for him and he became famous beyond the ivory tower of physics.
“I take the Nobel Prize seriously. It’s not only an opportunity, it’s also a responsibility,” he says.

In 2008, Frank and his wife, Betsy Devine, came to Stockholm to devote a semester to research at the physics institute Nordita. The couple loved Stockholm and Frank started working together with several researchers at Nordita and the department of physics. When the Swedish Research Council announced a new grant for Swedish universities to recruit top international researchers, both Frank and Stockholm University jumped on board.
Frank Wilczek likes the environment of the department of physics and Stockholm in general. “The Albanova building is extremely attractive, that’s a pleasure to inhabit,” he says. There are several groups of interest to him (e.g., cosmology, condensed matter) that normally have regular informal meetings, journal clubs, and seminar series. “Nearby is Nordita, where I’ve also got an office.  It too has lots of high-level scientific activity.”

He also appreciates that the University is a green space in the city, and loves taking long walks around Stockholm and its surroundings.
“I normally spend two segments in Stockholm each year, for about ten weeks at a time. We now own an apartment in Östermalm. Sadly, I haven’t been there since December 2019. We recently moved to a new house here in Massachusetts, which was very fortunate. Concord is a small town with a short walk to the forest. It’s a very attractive place, where Henry Thoreau was based and was inspired by nature. My wife Betsy Devine has done a fantastic job with the house and garden. I have also been able to have regular routines, eating well, exercising. I’ve lost over 20 pounds and I’m feeling great physically. "

Video interview with Frank Wilczek during the Nobel calling week 2019