Fourth report from Sonja Murto in the Arctic 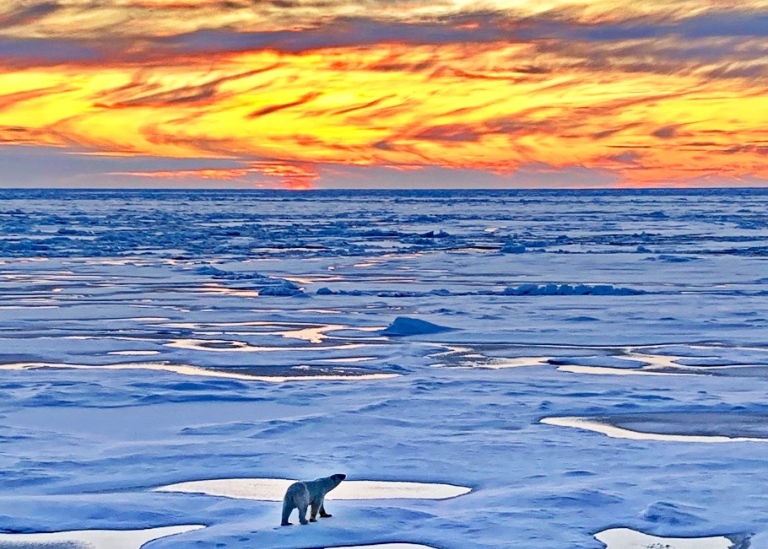 Polar bear on ice with frozen melt ponds and sunset; can it me more beautiful? Photo: Sonja Murto

Today was our last ice station during the SAS polar expedition in the Arctic. The weather was lovely: a high pressure gave rise to blue skies and sunshine, but also to cold northerly winds (up to 10 m/s in the late afternoon) and temperatures around -5 degrees. Ice coring teams and project specific groups were out on the ice in the afternoon, simultaneously as the beam net was operating in the back of the ship trying to catch some fish. The helicopter was out in the morning deploying traps and longlines. We saw lots of birds flying around - first ones in over a month!

Right before dinner, less than an hour after that the last group (me and John) returned to the ship from the ice, we got a curious visitor: a polar bear! Everyone was informed and we were all gathered at the front of the ship with our cameras and drones ready - following the polar bear as it was walking around the ship, trying to climb up along the side of Oden, taking a nap, rolling around in the snow and checking the longline traps and red poles at the ice coring station. We may also have caught her with the GoPro that was attached to one of the poles on the ice that she decided to take a closer look at!

After dinner we got another call: a walrus at the back of the ship! Later in the evening, after the ping-pong tournament final, the polar bear returned, walking around the ship in the same footsteps she made earlier, sitting down looking at us and wandering around during the first sunset we have experienced in almost 2 months.

Tomorrow is our last day of research on Oden before a 9-day transit starts back towards Sweden.