There is huge potential in green chemistry which can speed up the transformation to a sustainable society. That was the message when Professor Paul T. Anastas held his inaugural lecture at Stockholm University in the presence of King Carl XVI Gustaf of Sweden. 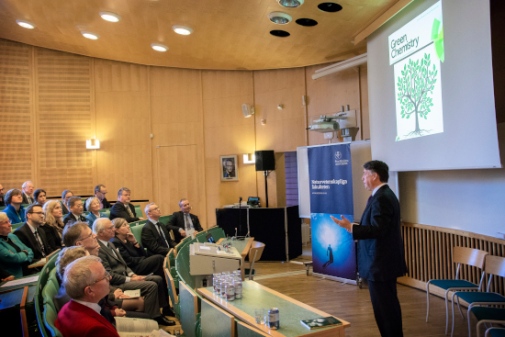 Paul T. Anastas is Professor and Director of Yale University's Center for Green Chemistry and Green Engineering. He is known as the "Father of Green Chemistry" for his work on the design and manufacture of chemicals that are non-hazardous and environmentally benign.

Professor John Warner, Monash University in Australia, and President of The Warner Babock Institute for Green Chemistry has cooperated with Paul T. Anastas for many years. John Warner made some brief remarks on the gains made by green chemistry and on the potential for further research in the area.

Chemistry can fulfil the needs of society

Anja-Verena Mudring, professor of physical materials chemistry at Stockholm University, is the host for Paul T. Anastas during his stay in Stockholm. She passionately talked about being a chemist:
“We can form new materials with new functions. It is a satisfying moment when you are the first person to create a new compound.”

Those materials can be used in many areas and chemistry can fulfil the needs of society.
But chemistry is a double edged sword – there can also be disasters, like it has been with DDT, Anja-Verena Mudring added.
“Paul gave us the tools so we, as chemists, can act as the ´good guys´. Now we have to teach the next generation of chemists about our moral responsibilities.” 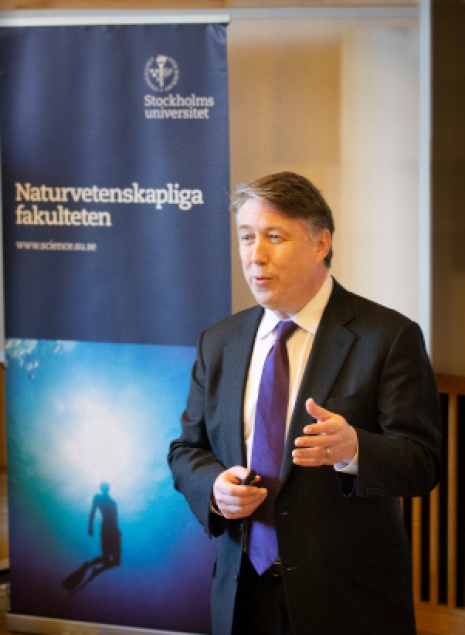 Paul T. Anastas started his lecture by stating that this professorship is the greatest honor of his life and that he hopes there will be many fruitful results coming out of his cooperation with colleagues in Stockholm. He then talked about some of the great things that is happening within the green chemistry community, like new materials and pharmaceuticals.
“By using green chemistry we can change the direction for chemistry from being a problem to becoming a solution. We have the power to change the future!”

He then stressed the need to bring the scientific findings into practice and scale them up for commercial use. There are many companies in this area already, but there is still a large potential within the field.

Paul T. Anastas stressed that green chemistry is one important component in the quest for reaching the global Sustainability Development Goals (SDGs). One finding coming out of his research is a new way of splitting water – and reducing carbon. This water can also be used for producing vodka and then Paul T. Anastas handled over the first bottle of carbon negative vodka to King Carl XVI Gustaf.

Paul T. Anastas ended his speech by quoting Albert Einstein – “The duty of a scientist is to tell everything that is true”. With the knowledge a chemist gather comes responsibility. Chemists know how to manipulate matters and hence green chemistry can speed up the transformation to a sustainable society.

Paul T. Anastas was followed by two shorts talks by researchers at Stockholm University.
Adam Slabon, Assistant Professor in material chemistry talked on “Chemist or Nature: the challenge who is the best” and Line Gordon, director of Stockholm Resilience Centre, talked on solving global challenges through sustainability services.

Need to scale up the efforts 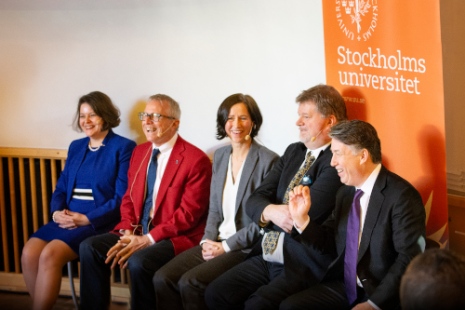 All panelists stressed that green chemistry is important in the endeavor for sustainability. But there is need to scale up the efforts and persuade even more companies to invest in this area. Anja-Verena Mudring said that we have to gather scientists from other areas if we want to make the changes. “As scientists we need to get out of our comfort zones. We have to talk to experts from other areas.”

Berit Olofsson also stressed the need to bring experts from different fields together. She told that the university is planning for a centre on sustainable chemistry and circular systems.

There were questions from the audience on the biggest challenge in green chemistry and what a young researchers can do in the laboratory. Robin Rogers answered that chemists have to convince and communicate with society. Story telling can be a useful method.
Anja-Verena Mudring agreed that all is about communication.
“As ´nerdy´ scientists we have to go out and talk to people. We can make a change together!”