Current rates of plastic emissions globally may trigger effects that we will not be able to reverse, argues a new study by researchers from Sweden, Norway and Germany published on July 2nd in Science. According to the authors, plastic pollution is a global threat, and actions to drastically reduce emissions of plastic to the environment are ”the rational policy response”. 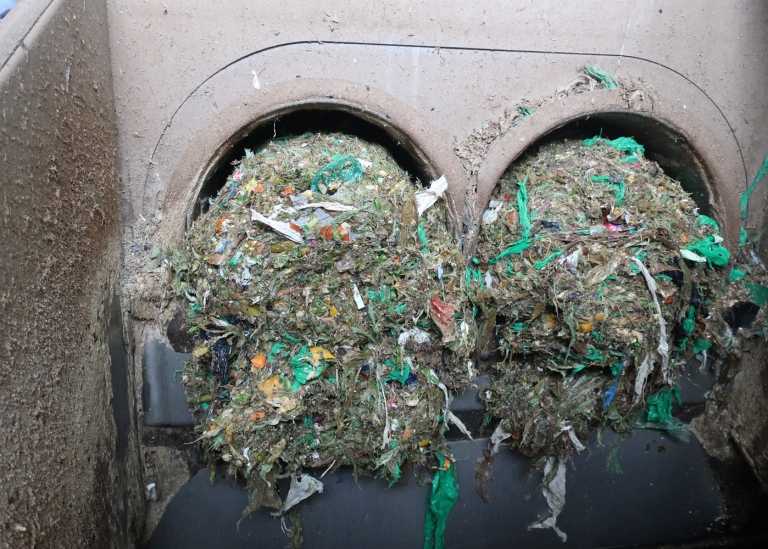 Plastics separated from food waste after grinding and pulping from a food waste recycling facility in Norway, as part of a process to convert food waste to biogas and fertilizer. The research project mapped how plastic gets from food waste to farmers fields. Photo: Caroline Hansen and Heidi Knutsen, NGI

Plastic is found everywhere on the planet: from deserts and mountaintops to deep oceans and Arctic snow. As of 2016, estimates of global emissions of plastic to the world’s lakes, rivers and oceans ranged from 9 to 23 million metric tons per year, with a similar amount emitted onto land yearly. These estimates are expected to almost double by 2025 if business-as-usual scenarios apply.
“Plastic is deeply engrained in our society, and it leaks out into the environment everywhere, even in countries with good waste-handling infrastructure,” says Matthew MacLeod, Professor at Stockholm University and lead author of the study. He says that emissions are trending upward even though awareness about plastic pollution among scientists and the public has increased significantly in recent years. 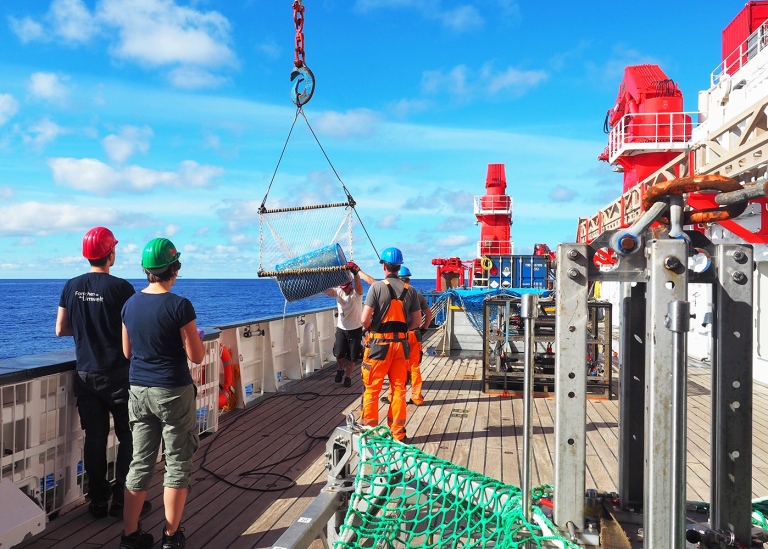 Catching a big blue barrel floating on the ocean surface in the Great Pacific Garbage Patch from the German research vessel SONNE during expedition SO268/3 crossing the North Pacific Ocean from Vancouver to Singapore in summer, 2019. Photo: Roman Kroke/UFZ

That discrepancy is not surprising to Mine Tekman, a PhD candidate at the Alfred Wegener Institute in Germany and co-author of the study, because plastic pollution is not just an environmental issue but also a “political and economic” one. She believes that the solutions currently on offer, such as recycling and cleanup technologies, are not sufficient, and that we must tackle the problem at its root.
“The world promotes technological solutions for recycling and to remove plastic from the environment. As consumers, we believe that when we properly separate our plastic trash, all of it will magically be recycled. Technologically, recycling of plastic has many limitations, and countries that have good infrastructures have been exporting their plastic waste to countries with worse facilities. Reducing emissions requires drastic actions, like capping the production of virgin plastic to increase the value of recycled plastic, and banning export of plastic waste unless it is to a country with better recycling” says Tekman. 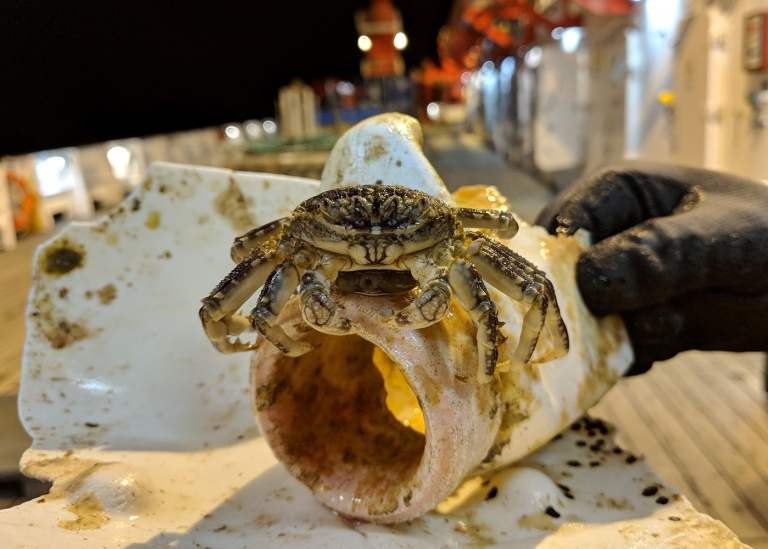 Surface-floating macroplastic item with a decapod, sampled from the German research vessel SONNE during expedition SO268/3 crossing the North Pacific Ocean from Vancouver to Singapore in summer, 2019. Photo: Gritta Veit-Köhler Senckenberg

A poorly reversible pollutant of remote areas of the environment

Plastic accumulates in the environment when amounts emitted exceed those that are removed by cleanup initiatives and natural environmental processes, which occurs by a multi-step process known as weathering.
“Weathering of plastic happens because of many different processes, and we have come a long way in understanding them. But weathering is constantly changing the properties of plastic pollution, which opens new doors to more questions,” says Hans Peter Arp, researcher at the Norwegian Geotechnical Institute (NGI) and Professor at the Norwegian University of Science and Technology (NTNU) who has also co-authored the study. “Degradation is very slow and not effective in stopping accumulation, so exposure to weathered plastic will only increase,” says Arp. Plastic is therefore a “poorly reversible pollutant,” both because of its continuous emissions and environmental persistence.

Remote environments are particularly under threat as co-author Annika Jahnke, researcher at the Helmholtz Centre for Environmental Research (UFZ) and Professor at the RWTH Aachen University explains:
“In remote environments, plastic debris cannot be removed by cleanups, and weathering of large plastic items will inevitably result in the generation of large numbers of micro- and nanoplastic particles as well as leaching of chemicals that were intentionally added to the plastic and other chemicals that break off the plastic polymer backbone. So, plastic in the environment is a constantly moving target of increasing complexity and mobility. Where it accumulates and what effects it may cause are challenging or maybe even impossible to predict.” 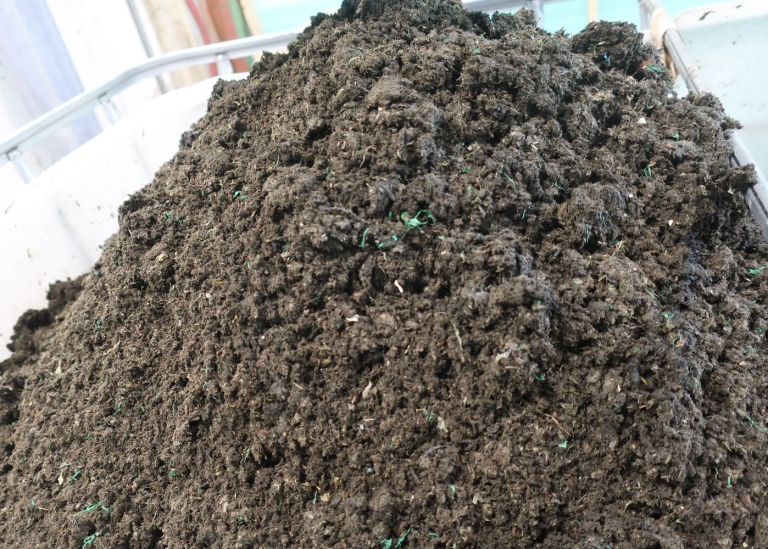 Solids that were filtered out of liquid fertilizer generated from food waste that was generated for agriculture. Several plastic pieces are visible. Many of the invisible microplastics will continue to be in the liquid fertilizer. Photo: Caroline Hansen and Heidi Knutsen, NGI

On top of the environmental damage that plastic pollution can cause on its own by entanglement of animals and toxic effects, it could also act in conjunction with other environmental stressors in remote areas to trigger wide-ranging or even global effects. The new study lays out a number of hypothetical examples of possible effects, including exacerbation of climate change because of disruption of the global carbon pump, and biodiversity loss in the ocean where plastic pollution acts as additional stressor to overfishing, ongoing habitat loss caused by changes in water temperatures, nutrient supply and chemical exposure.
Taken all together, the authors view the threat that plastic being emitted today may trigger global-scale, poorly reversible impacts in the future as “compelling motivation” for tailored actions to strongly reduce emissions.
“Right now, we are loading up the environment with increasing amounts of poorly reversible plastic pollution. So far, we don’t see widespread evidence of bad consequences, but if weathering plastic triggers a really bad effect we are not likely to be able to reverse it,” cautions MacLeod. “The cost of ignoring the accumulation of persistent plastic pollution in the environment could be enormous. The rational thing to do is to act as quickly as we can to reduce emissions of plastic to the environment.”

The article “The global threat from plastic pollution” is published in Science (2021) and written by Matthew MacLeod, Hans Peter H. Arp, Mine B. Tekman and Annika Jahnke.