Past migration and Pleistocene ice ages still impact size and structure of modern eelgrass communities, according to a new study published in PNAS. This could have implications for how well eelgrasses adapt to threats like climate change. 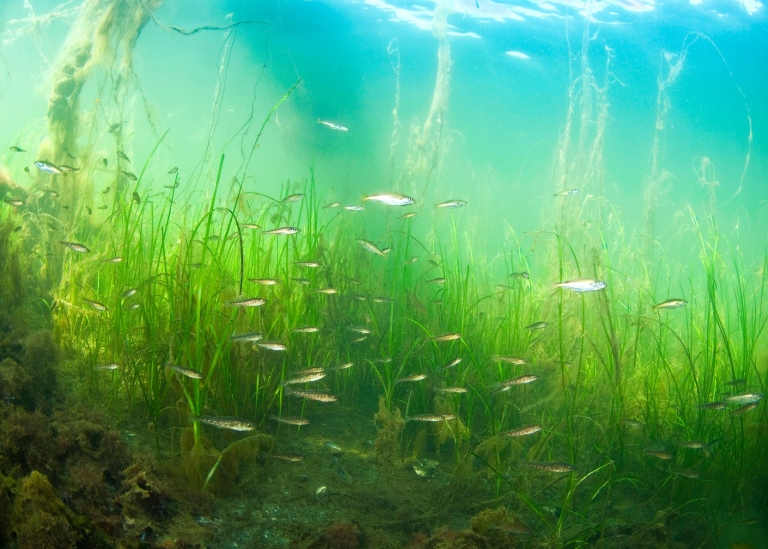 The scientists behind the study were stunned to discover that genetic legacy sometimes does more to shape modern eelgrass communities than the current environment.
“We already knew that there was big genetic separation between the oceans, but I don’t think any of us ever dreamed that that would be more important than environmental conditions,” says Emmett Duffy, marine biologist with the Smithsonian Environmental Research Center and lead author of the report. “That was a big surprise to everybody.”

Eelgrass disappear when the ocean gets too hot

Eelgrass is among the most widespread shallow-water plants in the world. Besides providing food and habitat for many undersea animals, eelgrass offers a plethora of services to humans. It protects coastlines from storms, soaks up carbon and can even reduce harmful bacteria in the water. In most places where it grows, eelgrass is the dominant, or only, seagrass species present. That makes its survival critical to the people and animals that live there.

The lower genetic diversity in the Atlantic could make it hard for some populations to adapt to sudden changes. Ecologists have already seen eelgrass disappearing from some regions as the waters heat up. In Portugal eelgrass has begun pulling back and moving farther north, into cooler waters.

”The striking results of this study make it tempting to suggest that there might be a genetic basis to the documented poor resilience of eelgrass beds along the Swedish west coast”, says co-author Johan Eklöf, associate professor and docent at the Department of Ecology, Environment and Plant Sciences at SU.

How the study was performed

The researchers studied eelgrass communities at 50 sites in the Atlantic and Pacific. With 20 plots sampled per site, the team came away with data from 1,000 eelgrass plots. After running a series of models, the researchers discovered a host of differences between the Atlantic and Pacific eelgrass ecosystems – differences that closely aligned with the genetic divergence from the Pleistocene migration and subsequent ice ages.

While Pacific eelgrasses often grew in “forests” that regularly surpassed three feet tall and sometimes reached more than twice that high, the Atlantic hosted more diminutive “meadows” that rarely came close to that height. The genetic differences also aligned with the total biomass of eelgrass. In the Atlantic, evolutionary genetics and the present-day environment played equally strong roles in eelgrass biomass. In the Pacific, genetics had the upper hand.

These impacts flowed up to other parts of the ecosystem as well. When it came to small animals that lived in the eelgrass, like invertebrates, the genetic signature from the Pleistocene again played a stronger role than the environment in the Pacific – while the two played equally strong roles in the Atlantic.

How to protect remaining eelgrass beds

That ancient genetics can play such a strong role – sometimes stronger than the environment – has some ecologists concerned about whether eelgrass can adapt to more rapid changes. To protect existing eelgrass beds, maintaining current diversity is a good first step. In places that have already lost eelgrass beds, restoration offers some promise.