While exploring two exoplanets in a bright nearby star system, ESA’s exoplanet-hunting CHEOPS satellite has unexpectedly spotted the system’s third known planet crossing the face of the star. This transit reveals exciting details about a rare planet with no known equivalent.

The European Space Agency ESA’s space telescope CHEOPS is primarily dedicated to characterise already known exoplanets, that is, planets orbiting stars other than the Sun. Now CHEOPS has discovered the first known exoplanet with an orbital period longer than 100 days to transit a bright star, according to an upcoming study in Nature Astronomy. The star is bright enough to be visible to the naked eye. 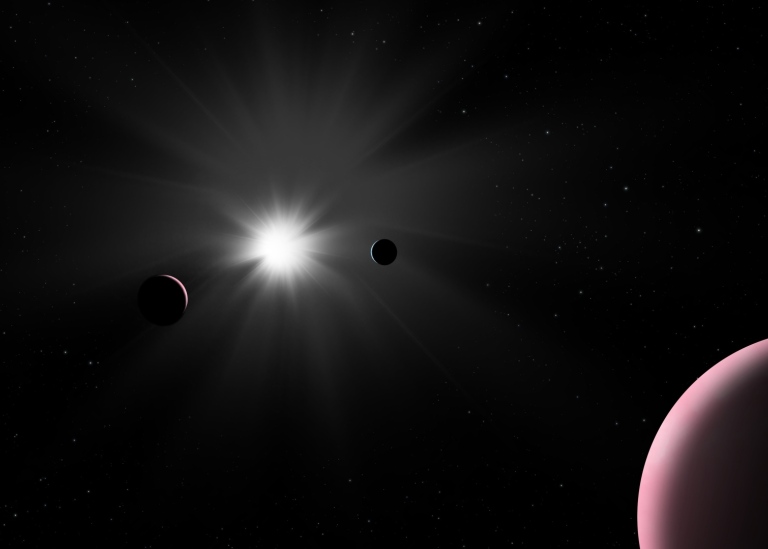 – Only a very small fraction of exoplanetary systems are oriented in such a way that planets transit their star. To find such a system around a nearby and bright star is a real prize – only two other similar systems have been discovered so far, and none with a planet of comparable orbital time, says Alexis Brandeker, associate professor at the Department of Astronomy, Stockholm University, one of the co-authors who has contributed to the data analysis that the study is based upon.

Named nu2 Lupi, this bright, Sun-like star is located 46 light-years away from Earth, which is in the immediate neighbourhood of the Sun, astronomically speaking. From measurements of the stellar motion, it has previously been known to harbour a system of three planets named b, c, and the presently observed d, with orbital periods of 12, 28, and 107 days respectively.

– We set out to build on previous studies of nu2 Lupi and observe planets b and c crossing the face of Nu2 Lupi with CHEOPS, but during a transit of planet c we spotted something amazing: an unexpected transit by planet ‘d’, which lies further out in the system, says Laetitia Delrez of the University of Liège, Belgium, and lead author of the new finding.

The likelihood for a planet to transit its star diminishes with the orbital radius of the planet. For planets at the same distance from their stars as planet d, one can expect the planet to transit in only one out of a hundred such systems. At the same time, planets in wider orbits are among the most interesting to study, as they are more similar to the planets of our own solar system. Put into our solar system, planet d would orbit just outside Mercury.

Exoplanets transiting stars enable studies of their atmosphere, orbit, size and inner structure. The high precision measurement of planet d found it to have 2.5 times the Earth radius. By combining CHEOPS observations with earlier measurements of the stellar motion it was possible to compute mean densities of the planets and thereby estimate their composition.

Planet b was found to be mostly rocky, while planet c and d likely contain a higher fraction of water than can be found on Earth, with a thick atmosphere of hydrogen and helium gases. The water is not expected to be in a liquid phase, however, but either as high-pressure ice or hot vapour.

– The combination of a bright parent star, long orbital period, and suitability for follow-up characterisation, makes planet d hugely exciting – it’s an exceptional object with no known equivalent, and sure to be a golden target for future study, adds co-author David Ehrenreich of the University of Geneva, Switzerland.

Can search for rings

Already now we can search for exomoons and rings around the planet, according to Alexis Brandeker .

– The next step is to closer characterise the atmosphere by using the larger space telescopes Hubble and the future James Webb, to be launched in the fall this year, he says.

The article Transit detection of the long-period volatile-rich super-Earth Nu2 Lupi d with CHEOPS  by Delrez, L. et al. (2021) is published in Nature Astronomy.
CHEOPS is an acronym for CHaracterising ExOPlanet Satellite. It is a space telescope with a primary goal to study known exoplanets, that is, planets orbiting other stars than the Sun. CHEOPS is lead by the Europeans space agency ESA in collaboration with Switzerland and contributions from 10 other countries, among them Sweden. In Sweden participating institutions come from Chalmers, Lund University, and Stockholm University.

Here is a video about the CHEOPS space telescope.