Integrative analyses of molecular and imaging data can lead to more accurate explorations of ocean microbes. This provides valuable information for improving the understanding of an Earth system under anthropogenic change, according to a new study in Nature Communications. 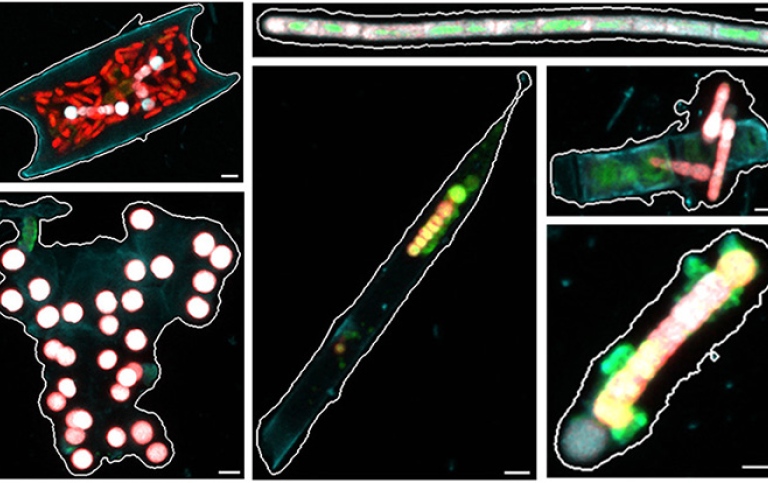 While most people these days have their attention firmly fixed on carbon because of the role of CO2 in climate control, we shouldn’t forget about nitrogen. Like carbon, nitrogen is one of the major components of life’s cellular building blocks (DNA, proteins). Nitrogen is also one of the most important growth-limiting nutrients for both land plants and marine phytoplankton (the marine microscopic “plants” responsible for half of the total photosynthesis on the planet). This may come as a surprise given that 80 per cent of the atmosphere is composed of nitrogen gas or dinitrogen (N2). However, N2 is very stable and resistant to chemical reactions, and hence it cannot be assimilated by most organisms. That’s why the small but diverse group of microbes that are able to “fix” atmospheric N2 into more accessible forms for living organisms are so crucial for the Earth ecosystem, acting as natural fertilizers. These nitrogen-fixers, also called diazotrophs (di=2; azo=nitrogen; troph=pertaining to food), consist of a few bacterial and archaeal groups. On land, more than 90 per cent of nitrogen fixation is performed by bacteria living in symbiosis with a diverse group of land plants (the legumes and others).

Many terrestrial systems are far better characterized given their vital importance to agriculture, yet the amount of nitrogen fixed in the ocean is at least as much as that on land. Marine nitrogen-fixers cover a broad size spectrum, from μm to mm (more than three orders of magnitude), due to their diverse lifestyles: single cells, cell aggregates, colonies, free-living, and symbiotic associations. This challenges our ability to collect and separate them from the co-occurring and more abundant microbial populations (with a few exceptions of seasonal and localized nitrogen-fixer blooms). In addition, our ability to observe and study the diversity, activity, and distribution of marine nitrogen-fixers is hindered by the vastness of the global ocean.

Data from more than 200 locations

“This is where the Tara Oceans project, based on sampling of marine plankton communities throughout the world’s ocean at an unprecedented scale, comes into the story,” notes Chris Bowler, CNRS scientist at the Institut de Biologie de I’École Normale Supérieure in Paris, co-author on a recent study published in Nature Communications to explore the distribution of nitrogen-fixers at global scale.

From its departure in September 2009 to its return in December 2013, the research schooner Tara sailed 140,000 km over a period of 38 months across the main oceanic regions, systematically collecting environmental data along with plankton samples covering the whole plankton size spectrum (microns to millimeters) from more than 200 locations. At all stations, DNA samples were taken from surface to deep in the oceans’ interior (0, 200, and 1000 m), while some locations included parallel samples to generate molecular (e.g. DNA sequencing) and microscopy imaging datasets. Using machine learning prediction tools for analysing >2 million images in combination with the analysis of 30 terabases of DNA sequencing data, an improved global overview of abundance, diversity and distribution of nitrogen-fixers was reported by Pierella Karlusich and colleagues from France (ENS, CEA, CNRS, Université Paris Saclay, Sorbonne Université), Germany (EMBL), Spain (CSIC) and Sweden (Stockholm University).

Co-author Eric Pelletier from CEA/Genoscope comments “It is one of the very first large-scale analyses where omics (ie: genome information) and imaging data (ie: shape, size and aspect) of uncultured microbial organisms in the wild are connected, opening a new era in environmental studies”.

Co-author Rachel Foster from Stockholm University mentions, “I was initially surprised by how well the images predict the genes and the genes predict images. Plankton is patchy and sampling the ‘patches’ is difficult. These high-throughput imaging datasets were essential in our work. We gained such insight into the ecology of these biogeochemically relevant populations. Our approach, or pipeline, can be adapted for many other populations”.

“This work provides a proof of concept that integrative analyses of molecular and imaging data can lead to more accurate explorations of ocean microbes. Given that nitrogen is a key driver of plankton dynamics and, therefore, of global biogeochemical cycles and climate, our study also provides valuable information for improving the understanding of an Earth system under anthropogenic change”, Juan Pierella Karlusich says.