Using x-ray lasers, researchers at Stockholm University have been able to follow the transformation between two distinct different liquid states of water, both being made of H2O molecules. At around -63 Centigrade the two liquids exist at different pressure regimes with a density difference of 20%. By rapidly varying the pressure before the sample could freeze, it was possible to observe one liquid changing into the other in real time. Their findings are published in the journal Science.

Water, both common and necessary for life on Earth, behaves very strangely in comparison with other substances. How water’s properties such as density, specific heat, viscosity and compressibility respond to changes in pressure and temperature is completely opposite to other liquids that we know. Consequently, water is often called “anomalous”. If water would have behaved as a “normal liquid” we would not exist, since marine life could not have developed. However, it is still an open question: what causes these anomalies? 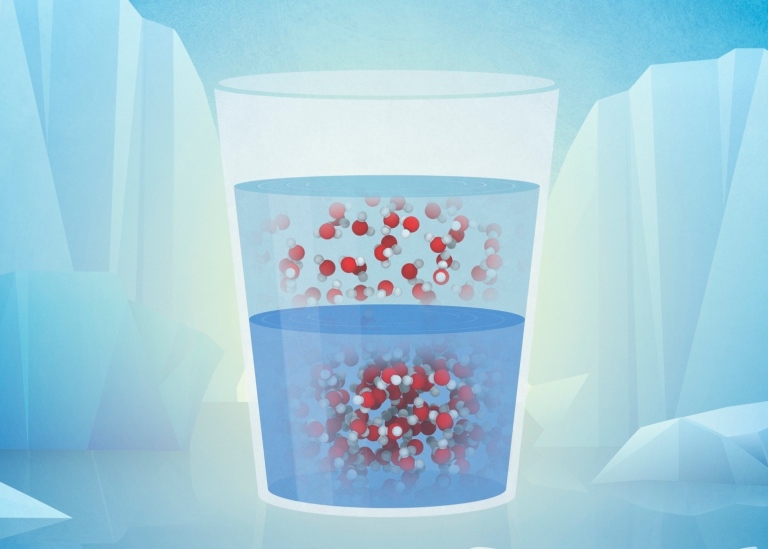 There have existed a number of explanations to the strange properties of water and one of them propose that water has the ability to exist as two different liquids at different pressures and at low temperatures. If we would be able to keep the two liquids in a glass they would separate with a clear interface in between, as for water and oil (see figure). Ordinary water at our ambient conditions is only one liquid and no interface would be seen in a glass – but on a molecular level, it fluctuates creating small local regions of similar density as the two liquids, causing water’s strange behaviour. The challenge has been that no experiment has been possible at the temperatures where the two liquids would co-exist since ice would form almost instantaneously. Up to now it has only been possible to investigate water at these conditions using different types of computer simulations, which has led to a lot of contradicting results depending on the model used.

“What was special was that we were able to X-ray unimaginably fast, before the water froze, and could observe how one liquid transformed to the other”, says Anders Nilsson, Professor of Chemical Physics at Stockholm University. “For decades, there has been speculations and different theories to explain these anomalous properties and why they get stronger when water becomes colder. Now we have found that the two liquid states are real and can explain the water strangeness.”

“I have studied several forms of disordered ices for a long time with the goal to determine whether they can be considered a glassy state representing a frozen liquid”, says Katrin Amann-Winkel, Senior Researcher in Chemical Physics at Stockholm University. “It is a dream come true to see that indeed they represent real liquids and we see the transformation between them”.

“We worked so hard for several years to conduct measurements of water under such low temperature conditions without freezing and it is so rewarding to see the outcome”, says Harshad Pathak, Researcher in Chemical Physics at Stockholm University. “Many attempts over the world have been made to look for the two liquids by putting water in tiny compartments or mixing it with other compounds but here we could follow it as simple pure water”.

“I wonder if the two liquid states as fluctuations could be an important ingredient to the biological processes in living cells”, says Fivos Perakis, Assistant Professor in Chemical Physics at Stockholm University.  “The new result can open up many new research directions also about water in biological sciences”.

“Maybe one of the liquid forms is more prominent for water in small pores inside membranes used to desalinate water”, says Marjorie Ladd Parada, Postdoc at Stockholm University.  “I think the access to clean water will be one of the major challenges with climate change.”

“There has been an intense debate about the origin of the strange properties of water for over a century since the early work of Wolfgang Röntgen”, further explains Anders Nilsson. “Researchers studying the physics of water can now settle on the model that water can exist as two liquids in the supercooled regime. The next stage is to find if there is a critical point when the two liquids cross over to become only one liquid, as the pressure and temperature changes. A big challenge for the next few years.”

The study was done in cooperation with the POSTECH University in Korea, PAL-XFEL in Korea, SLAC national accelerator laboratory in California, Brooklyn College of the City University of New York in USA and St. Francis Xavier University in Canada. Other people that contributed to the study include previous members of the Chemical Physics group at Stockholm University- Kyung Hwan Kim, Alexander Späh, Daniel Mariedahl, Tobias Eklund and Matthew Weston.