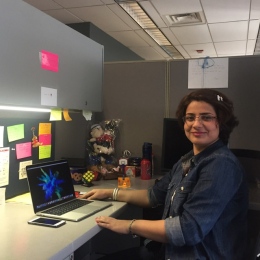 Welcome to my home page! I am a PhD student in the field of Computational Mathematics supervised by Dr. Olha Bodnar. My research interests include but not limited to Algorithm, Optimization and Bioinformatics. For information about my research interests and my papers please look at my google scholar.

My Erdős number is 3.

I am one of the lecturer for the course computer science for mathematitions  (2019) at Stockholm University.

I am a TA for the course algorithm and data structure (2016-2018) at the Ohio State University.

I was a lecturer for the courses discrete mathematics, and enginearing mathematics (2014-2015).

I was a lecturer for the course Mathematica for master students in the field of mathematics in KNT University of Technology (2013).

I also was a TA in KNT University of Technology for the course numerical analysis (2011).

Relative Clustering Coefficient. At this project we extended the clustering coefficnet to be able to check properties of the networks that are very close to the real life. The idea of this clustering was just to consider the edges in the network that the probability of them were larger than 0.