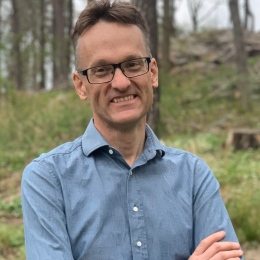 Our research is focused on understanding the doors and windows of our cells in the form of membrane proteins in general, and in particular the functions of ion channels and pumps that transport ions to make our nervous system work.

Professor of Biophysics at the Department of Biochemistry & Biophysics, although our research group is physically located at Science for Life Laboratory, which is a joint research environment between SU, KTH, and KI.

Apart from spending time on teaching and research with my group, we are involved in a number of scientific environments, with particular focus on mobility and cooperation between the three Stockholm Universities. I spend a great deal of my time as co-director of the strategic research area SeRC (Swedish e-Science Research Center), which we started as a joint SU-KTH-KI-LiU initiative, I sit in the steering group for the KAW-funded national research program on Data-driven life science, and I'm responsible for Stockholms University's part of a new joint KTH-SU-KI master program in molecular techniques in life sciences. In collaboration with Uppsala University we have also created a Swedish node within CECAM, through which I also serve on the CECAM council. I am also vice section dean of chemistry with particular responsibility for our graduate classes; drop me a line if you have any thoughts or suggestions about those. One of my strongest interests is how to create strong scientific environments through internationalization, diversity, open data and not least that our higher education institutions need to be driven by clear scientific and didactic visions - drop me a line if you have thoughts you want to share!

Our research is focused on understanding structure and function of ligand-gated ion channels, in particular in the human nervous system. Much of our work is dependent on large computer resources, and we develop a number of computational tools - in particular the codes GROMACS & RELION. Together with a number of universities in Europe, we have established a new EU-funded center-of-excellence for computational biomolecular research - BioExcel - where I'm the lead scientist. Since 2014, I have served on the Scientific Steering Committee for the European Computer Infrastructure PRACE, I have served as chair of the Scientific Steering Committee and been appointed to on the PRACE Board of Directors. Presently, I sit on the Research and Industrial Advisory Group of EuroHPC. Feel free to drop me a line if you have thoughts or ideas about how to improve the computational infrastructure both in Sweden and internationally to make sure it is guided by the researchers' needs instead of the opposite.

If you are interested in learning how fundamental biophysics about biological macromolecules such as proteins, DNA, and membranes, and in particular how models, statistical mechanics and simulations can be used to understand them, I teach a class in Molecular Biophysics. All lectures have recently been recorded in high quality (4k50fps) combined with using a lightboard for visualization, they have been partitioned into short concepts, and are available as a playlist on YouTube.

I'm in charge of Stockholm University's part of the Master program in Molecular Techniques in Life Sciences given jointly by SU, KTH, and KI. Here, you might meet me during registration, follow-up events, and not least your final thesis project.

Finally, I'm responsible for coordinating (and partly organizing) the PhD program classes common for the chemistry section in my role as vice dean of chemistry; drop me a line if you have comments or suggestions!

Our research is focused on understanding the doors and windows of our cells in the form of membrane proteins in general, and in particular the functions of ion channels and pumps that transport ions to make our nervous system work. We use a number of techniques ranging from bioinformatics to build models of human receptors and channels based on bacterial structures, biomolecular simulations to understand the molecular-level interactions in these complex molecules, and experimental techniques such as electrophysiology or spectroscopy to measure functional effects of conformational transitions, and how these are influenced by mutations in the membrane proteins or small molecules that can work as medical drugs. For example, this has enabled us to use molecular models in combination with experiments to determine how voltage-gated ion channels move between intermediate states during opening (Henrion 2012, Lindahl 2012). Similarly, in our work on the ligand-gated ion channels responsible for transmitting signals across the synaptic cleft between nerve cells we have been able to show that there are separate binding sites for molecules that either potentiate (amplify) or inhibit the nerve signals (Murail 2012). We can even reverse the behavior of the these channels by introducing single-site mutations that force the molecule to bind in a different allosteric modulation site, which opens the door to design of pairs of drugs that could be used to control the nerve system on a very fine-grained level (Brömstrup 2013). Finally, we are using both simulations and experiments to study how ATPase pumps transport ions, which has led to the first-ever structures of pumps with bound ions (Nyblom 2013).

The team also works with molecular simulation methodology development, in particular the widely used GROMACS package for which we are steering an international development team (Pronk 2013, Abraham 2015).

Since the start of 2016, we are excited to help build the new national infrastructure and research platform around cryo-electro microscopy at Stockholm University. Structure determination with cryo-EM works by collecting tens of thousands to millions of extremely noisy 2D images of single molecules, and our work is focused on developing new better and faster methods to reconstruct three-dimensional electron densities from the noisy micrograph data, in particular for the program RELION (Kimanius 2016, Forsberg 2017).

Do you want to join us?

On the PhD level, all positions funded directly by the research group will be announced through the department. Apart from this, there might be a few external agencies (e.g. Lawski) that occasionally directly funds PhD studies. For both options, successful candidates typically have a very strong academic track record, and prior experience either from working with us, or very strong recommendations from a different group.

On the postdoctoral level, our most successful candidates have usually secured their own funding e.g. from the EU Marie Curie program or Swedish foundations like Carl Trygger. For postdoctoral scholars, we require that you have extensive experience from working with some of the methods used on the group, and also an outstanding academic track record with several first-author publications.

If you think this describes you, don't hesitate to drop us a line!

Membrane proteins are of exceptional importance for transport and signalling in the cell, and pumps and channels in particular are key examples of proteins that adopt different conformational states as part of cycles that define their function.

Pentameric ligand-gated channels mediate signals across the kingdoms of life and are highly sensitive to modulators such as benzodiazepines or alcohol. Recent advances in cryo-EM have enabled us to identify and obtain structures of several new channels, including new prokaryotic model systems and heteromeric channels in the human nervous system.

Our research is focused on understanding the doors and windows of our cells in the form of membrane proteins in general, and in particular the functions of ion channels and pumps that transport ions to make our nervous system work.