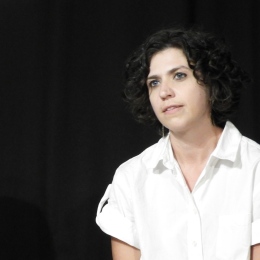 Karolina Enquist Källgren is associate professor (reader, Swedish docent) in history of ideas. She defended her doctoral thesis in 2015 at Gothenburg university with a dissertation on the spanish philosopher María Zambrano and her philosophy of subjectivity. The dissertation was published in an updated version with the title, María Zambrano's exile ontology: expressive subjectivity (Palgrave Macmillan, 2019).

She has since been working on a project that investigates the relationship between religion and physics in the 1920s with special regard to the early development of quantum physics. The project investigates the circulation of knowledge between the works of Spanish theologian Xavier Zubiri and Erwin Schrödinger, through the former's work at the Max Planck-seminar in Berlin.

In another project she works with the experience of exile as a context to theory of knowledge and political philosophy during the period 1930-1975. The project investigates a number of authors that ended up in exile caused by the Spanish civil war and WWII, and the way in which they used aesthetic concepts siucha s for example form to produce a poltiical critique of the totalitarian regimes that they had left. Among other things the project investigates how the authors Wlater Benjamin, Ernst Bloch, Alfred Sohn-Rethel, María Zambrano, Adolfo Sánchez Vázquez and Eduardo Nicol - all living in exile in different locations - simultaneously developed a concept of social form, influenced by marxism as well as neo-kantian aesthetics.