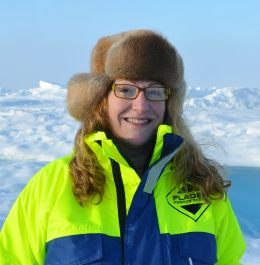 In January 2008 I was appointed professor in Marine Ecology at Stockholm University. Earlier I worked at Uppsala University as professor (2003-2007), senior lecturer (1993-2003), researcher (1989-1993) and PhD-student (1982-1989) in Plant Ecology. My undergraduate degrees (BSc 1978, MSc 1982) I obtained from the Radboud University in Nijmegen, The Netherlands, with majors in Aquatic Ecology, Experimental Botany and Geobotany. For more than 25 years I have taught undergraduate and graduate courses in Marine Ecology at the Universities of Uppsala and Stockholm and I have supervised >20 and examinated >70 PhD-students.

The CAO ecosystem is one of the last large untouched wildernesses on Earth - and it is changing incredibly fast as a result of climate change. Nowhere on earth, global warming strikes harder than in the Arctic region. The Arctic Council has defined the CAO ecosystem as the permanently ice-covered deep basins and ridges of the Arctic Ocean off the continental shelf. However, during the last 20 years the CAO has not been permanently ice-covered anymore. Summer ice loss due to global warming is up to 40% of the ice surface and up to 60% of the ice volume. A different CAO emerges: a more dynamic ecosystem with a marginal ice zone that moves further north in summer and back again in winter. The new seasonality in melting and freezing cycles is expected to alter, e.g., stratification, nutrient transports, biological production and species distributions.

The 3.3 million square km CAO ecosystem around the North Pole is larger than India - and nobody even knows which fish species occur in the water column! This illustrates that the CAO is severely under-investigated. Obviously, the reason for this is the difficulty of access - only heavy ice-breakers could get here. However, with the disappearance of the permanent ice-cover, the area gets increasingly accessible for human activities, and new scientific knowledge is mandatory for supporting polictical decisions on ecosystem-based management and environmental protection. The political challenge is especially large because most of the CAO is situated outside the Exclusive Economic Zones of the coastal countries, and robust international agreements are necessary.

In 2019-2021, I participate in two scientific icebreaker expeditions to the CAO. During the international MOSAiC Expedition with R/V Polarstern, a transpolar drift expedition crossing the deep Amundsen Basin in September 2019 - October 2020, we have the unique chance to document seasonal variation of biological and biogeochemical processes in the CAO. During the Swedish SAS expedition with icebreaker Oden we will cross the Nansen Basin, Gakkel Ridge, Amundsen Basin, North Pole, Canada Basin, Lomonosov Ridge, Greenland shelf, Amundsen Basin, Morris Jessup Plateau, Yermak Plateau. The aim of both expeditions is to study how the fragile CAO marine ecosystem is expected to change in the coming century when the input of freshwater from melting sea ice and glaciers increases and the perennial sea ice cover becomes seasonal. The Oden expedition participates in the scientis-driven initiative "Synoptic Arctic Survey" (SAS), with many research vessels involved in different parts of the Arctic Ocean (https://synopticarcticsurvey.w.uib.no). The aim is to for the first time get an overview of how the Arctic marine ecosystems function and interact with each other, e.g., how the Arctic continental shelf seas influence the CAO.

Project title: Uncovering the largest blind spot on the map of the world's fish stocks: pelagic fish, their dependence on sea ice, and their role in the Central Arctic Ocean food web

This project is carried out by the EFICA Consortium involving seven European research institutes. The purpose of the research is to address the following research questions: (1) What are the distributions of fish species with a potential for future commercial harvests in the High Seas portion of the CAO? (2) What fish species are currently present in the High Seas portion of the CAO? (3) What are the trophic linkages among fishes and between fishes and other taxonomic groups? (4) What are the likely key ecological linkages between potentially harvestable fish stocks of the High Seas portion of the CAO and adjacent shelf ecosystems? The EFICA method package for the MOSAiC and SAS-Oden expeditions contains four principal methodologies that all four are necessary for collecting basic data on the presence and migration of fish in the CAO: (1) Hydroacoustic measuremens provide an estimate of the abundance of organisms in the Central Arctic deep scattering layer in the CAO at 200-600 m of depth (Leijonmalm et al., 2021), (2) Visual observations from deep-sea cameras at 200-600 m of depth will tell us how many fish are in the deep scattering layer compared to siphonophores that may also give rise to acoustic signals. Without these visual observations we cannot realistically estimate fish abundance. (3) Fish sampling with different types of fishing gear (specially designed vertical trawl, traps, longlines, fishing rods) will tell us which fish species inhabit the CAO and provide details about their distribution and ecology (size, biomass, age, maturity stages). Fish samples are necessary for calibrating the acoustic data and fish sampling includes also sympagic (ice-associated) juvenile polar cod. Fish samples will be taken for later analyses, such as stomach analyses, molecular analyses and otolith studies. Population genetics will enable us to analyse the intra-specific population structure of the sampled fishes to reconstruct their origin from spawning regions. Chemical and isotopic otolith analyses will enable the reconstruction of migration pathways, age and food sources. Furthermore, (4) eDNA samples is taken for later analyses of fish, their mammal predators and invertebrate prey. Financial support: European Commission (CINEA), Swedish Polar Research Secretariat.

The purpose of this research project is to complement the existing knowledge on the global marine microbiome with data from the permanently ice-covered CAO. Also this project is carried out during noth the MOSAiC and SAS-Oden expeditions. The work includes not only mapping the full collection of genes (DNA) in the microbial communities living in different sympagic (ice-associated), pelagic (water column) and benthic (sea bottom) habitats but also to analyze gene expression (RNA), both in the field and during incubation experiments, and to relate the results to biogeochemical cycling. The specific aims of the research project are: (1) To for the first time uncover patterns in the seasonal succession of microbial metabolic functions in the CAO, including unknown processes that may take place during the half-year long polar night. In summer the focus is on microbial processes related to the melting of sea ice which is increasing dramatically in the CAO as a result of global warming. (2) To particularly target C and N cycling, including testing two hypotheses: (a) that diazotrophy (biological N2-fixation) is a significant source of new nitrogen to the oligotrophic CAO marine ecosystem throughout the year, and (b) that urea is an alternative substrate for ammonium oxidation and chemoautotrophic CO2 fixation in the CAO, especially in winter and at low ammonium availability. Financial support: Swedish Research Council VR, Swedish Research Council Formas, Swedish Polar Research Secretariat.

2019-2022 Coordinator of the EFICA Consortium (European Fisheries Inventory in the Central Arctic Ocean); 2016-2017 Assessment of the BONUS impact on scientific excellence and dissemination; 2016- EU representative in the FiSCAO scientific expert group on fish stocks in the Central Arctic Ocean, 2016-2017 Scientific advisor and co-organiser of an international workshop on Marine Protected Areas in the Arctic Ocean for the Swedish Agency for Marine and Water Management; 2014- Swedish country representative in the Marine WG of the International Arctic Science Committee IASC (VR); 2016- Vice-chair of WG1 in the COST Action CA15136 EUROCAROTEN (EU Horizon 2020); 2003-2013 Chair of the Advisory Board of the BONUS EU-ERAnet and the BONUS EEIG (EU); 1997-2013 General Secretary of the NGO the Baltic Marine Biologists (BMB).

I am the chief editor of the first comprehensive science-based textbook on the biology and ecology of the Baltic Sea, published by Springer. Ninety-two authors, all experts in their respective research fields, have contributed with their knowledge. The aim of this book is to provide students and other readers with knowledge about the conditions for life in brackish water, the functioning of the Baltic Sea ecosystem and its environmental problems and management. The book highlights biological variation along the unique environmental gradients of the brackish Baltic Sea Area (the Baltic Sea, Belt Sea and Kattegat), especially those in salinity and climate. The book was published in april 2017 (www.springer.com).