Half the population of the Viking-town Sigtuna were migrants

New analysis of the remains of 38 people who lived and died in the town of Sigtuna during the 10th, 11th and 12th century reveals high genetic variation and a wide scale migration. The study is the largest of its kind so far in Sweden and a combination of several methods, including DNA analysis and Strontium isotope analysis of teeth. The results are published in a new article in Current Biology. 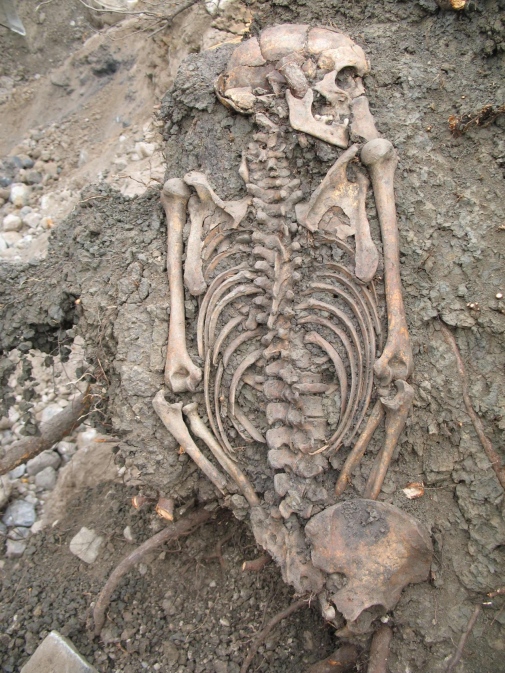 Adult male, Sigtuna, buried in the 11th century. Discovered in 2008.

Sigtuna is well known as one of the earliest actual cities in the area and was formally founded around 980 AD. More unknown is the fact that the picturesque town, which today is home to around 10 000 people, was a distinctly cosmopolitan place back then. Researchers at Stockholm university, in cooperation with Uppsala University, Middle Eastern Technical University in Turkey, the British Geological Survey in the UK, and Curt-Engelhorn-Zentrum Archäometrie in Germany, have analyzed the remains of 38 individuals from six different burial sites in Sigtuna. The analysis is based on a combination of methods from archeology and osteology, including DNA analysis and Strontium analysis of the teeth (isotope and level of Strontium in teeth varies depending of where the individual lived in their youth). The results are clear: around half the population of Viking age Sigtuna originated from outside Mälardalen.

- We´re used to thinking of the Vikings as a travelling kind, and can easily picture the school books with maps and arrows pointing out from Scandinavia, as far as Turkey and America, but not so much in the other direction, says Maja Krzewinska, researcher at the Archaeological Research Laboratory, Stockholm University and primary author behind the study.

Roughly half of the individuals examined grew up in or around the Sigtuna area. The other half is equally divided in to regional immigrants (from southern Scandinavia, Norway and Denmark) and long-distance immigrants from further away: the British Isles, Ukraine, Lithuania, northern Germany and other parts of central Europe. The immigration to Sigtuna was common for both males and females. Approximately 70 per cent of the female population was immigrants, compared to 44 per cent of the men.

- The archaeological record from Sigtuna never ceases to fascinate as it shows such a wide variety of cultural expressions. And here we see who grew up there and who moved to Sigtuna, says Anna Kjellström, osteologist at Stockholm University and one of the authors of the study.

- I especially like that we find 2ndgeneration immigrants among the buried, that kind of migratory information has never been encountered before as far as I know, says Anders Götherström, one of the leaders of the ATLAS-project in which this study was conducted.

Similar studies even further back in history would be very difficult, since before the arrival of Christianity the deceased were normally cremated, thus leaving insufficient material for DNA analysis.

The article Genomic and Strontium Isotope Variation Reveal Immigration Patterns in a Viking Age Town is published in Current Biology on August 23 2018.