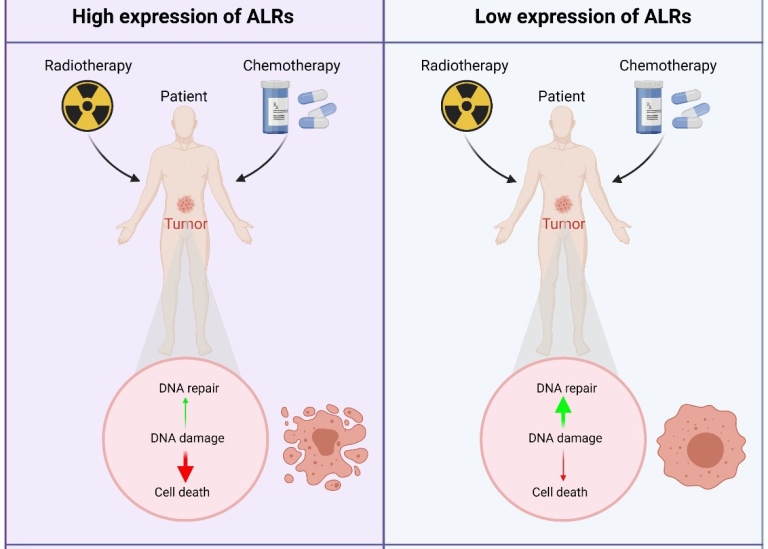 “Radiation and chemotherapy are not only the most common treatments for cancer but also essential preparative procedures for bone marrow transplantation. These treatments are however highly unspecific and often cause severe harm to the patients. The outcomes of radiation and chemotherapy varies from individual to individual, mostly due to inherent genetic differences in patients. This makes it difficult to prescribe an optimal patient‐specific dose. Hence, the fixed‐dose prescribed for the majority is limited because of the severe toxicity witnessed in a minority of individuals when higher doses are used. The molecular determinants of patient response to radiation and chemotherapy remain unclear. Understanding these is key for optimal individualized treatments and is required for the development of therapies against tissue injury caused by these treatments,” explains Dr. Nelson Gekara, Stockholm University, the senior investigator of the study published in Advanced Science.

The bone marrow is the most radiosensitive tissue and bone marrow failure is the major cause of suffering and death upon exposure to irradiation.

“When we exposed mice deficient in ALRs to a high dose of irradiation, we found that such mice were resistant, and their bone marrows were less affected compared the control mice. We also found that cancer cells deficient in ALRs were resistant but when genetically engineered to express ALRs, such cells became sensitive to the killing effect of irradiation and chemotherapy. Notably, our analysis of cancer patient data revealed that patients with lower levels of ALRs had poorer survival following chemotherapy,” describes Dr. Hui Jiang a research engineer at Stockholm University and the first author of the study.

ALRs were originally identified as proteins that become highly expressed under inflammatory conditions, such as during viral infections. Until now ALRs were thought to act as innate immune receptors that detect the presence of foreign or misplaced DNA inside cells and initiate inflammation. Here, the authors found that the ability of ALRs to potentiate the effects of radiation and chemotherapy is independent of their classical function in innate immune activation.

The most toxic effect of radiation or chemotherapy is linked to their ability to damage the genome. DNA damage often results in cell death, or if incorrectly repaired, causes genetic alterations that may lead to cancer or hereditary disorders. The authors found that when exposed to irradiation or chemotherapy, mouse and human cells deficient in ALRs repair DNA breaks faster, indicating that ALRs are inhibitors of DNA repair hence accelerate the killing effects of radiation and chemotherapy.

How do the ALRs inhibit the repair of the genome?

How do the ALRs inhibit the repair of the genome? The estimated length of DNA in a single mammalian cell is about 2 meters. In order to accommodate it within the nucleus of an average size of 6 µm, DNA is folded and densely packed within the chromatin. However, when the genome incurs damage, the chromatin undergoes decompaction to allow DNA repair factors to be recruited to damaged sites.

“We show that ALRs are in fact chromatin-bound proteins and that by virtue of their ability to undergo self-self interaction, these proteins hinder chromatin decompaction vital for the efficient repair of DNA breaks,” explains Dr. Jiang.

“The discovery of ALRs as key drivers of host response to radiation and chemotherapy is significant and could lead to more optimized treatment. For example, devising safe means to modulate the expression of ALRs would be one way of manipulating the patient’s response to achieve the desired therapeutic effects of radiation and chemotherapy. Further, determining the expression level of these proteins could be used to predict how the patients are likely to respond and therefore help in adjusting the treatment to suit the specific patient,” concludes Dr. Gekara.