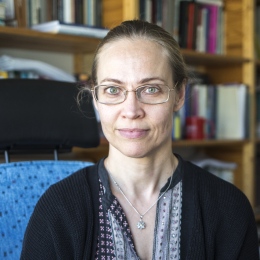 Charlotta Stern was promoted Professor of Sociology specialized in work and organizations in 2019. She was the deputy head of department until October 2019. She also held a position as pedagogical ambassadeur at CEUL during the year, and organized Departmental pedagogical lunchbreaks as well as Faculty meetings. In the fall semester, she was a member of a cross disciplinary group of SU-faculty who evalutated ten different educations at Stockholm university, as part of the SU internal quality evaluation system.

Stern's research mainly concern the Swedish labor market, and her research activities are part of the Ratio institute's Labor market program of which she is the PI. There, she has published a report on "Co-worker agreements" (in Swedish), and also edited a book titled En dynamisk arbetsmarknad published by Dialogos förlag.

Her research deals mostly with labour market issues. In 2018, she continued her research collaboration with Erik Bihagen (SOFI) and Magnus Nermo in their project on elites in the labour market (funded by Forte). The project resulted in a book called "Eliter i Sverige" (Elites in Sweden).

In 2017, she started up a labour market research project at Ratio dealing with employment protection legislation (LAS), aiming to understand why employers find the legislation troublesome.