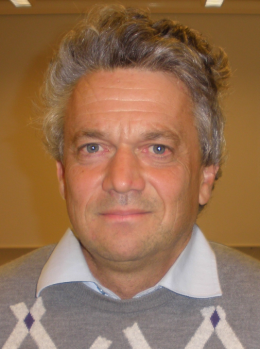 I am teaching the following courses:

Students of physical chemistry and related specialities (material chemistry, quantum chemistry, biophysics, etc) are welcomed to apply for graduate research projects (examensarbete) in the field of molecular simulations. The content of the work may be discussed in each individual case.

All material things around us (and we ourselves) consist of molecules. Molecules consist of atoms, atoms consist of electrons and atomic nuclei. Behavior of all these small parts of materia is determined by the fundamental laws of quantum mechanics. Molecular motion at "normal" conditions can be described by the laws of Newtonian mechanics. By knowing these laws, it is not difficult to predict what would happens with two atoms taken separately from the rest of the world. This can be done even with the help of pen and paper, as it was done before the 20th century, for example in calculations of the planetary motion. When the number of atoms in the studied system increases, calculations on a paper become no longer feasible. Here computers come to help. With modern computers, it is possible to compute the force acting on each atom in a system of many thousand atoms, and using the second law of Newton predict the motion of these atoms and thus behavior of the whole system. In cases when precision of the classical mechanics is not satisfactory, laws of quantum mechanics can be used though these laws require more extensive calculations. For larger molecular systems, some more simplified description than the atomistic level can be used. Important is that if computer simulations use only fundamental laws of quantum, classical and statistical mechanics, they are able to produce very accurate and detailed information about the studied molecular system, information which is often impossible or unacceptable expensive to extract from an experiment. Also, computer simulations are indispensable in visualization of molecular motion and in interpretation of experimental data. It is not surprisingly that the number of works in the area of computer simulations grows much faster that the average, and now computer simulations are routinely used even in the applied research, such as drug design or development of technological processes. Because of constantly growing range of applications, further development of simulation methods, algorithms and software is necessary to address to appearing demands. This is what research of the Molecular Computer Simulations group are about.