Research expedition to unexplored part of the Arctic

The marine ecosystem in the ice-covered area between Greenland and the North Pole is unexplored, but it is urgent to find out how it works. The Arctic sea ice is melting, which will radically change the ecosystem. This summer, a research expedition on board the Swedish icebreaker Oden will explore one of the world's most inaccessible places. “Nobody has ever performed these measurements there before, we are first in this giant area,” says the expedition's Chief Scientist Pauline Snoeijs Leijonmalm.

What lives below the surface, in the ice and on the seabed in the area around the North Pole? Scientists will discover that during this summer's expedition, which is part of a large international project, the Synoptic Arctic Survey (SAS). The project was initiated, and is run, by researchers who identified the lack of an overall picture of how the marine ecosystems in the Arctic Ocean work. Around thirty different ships will map different parts of the Arctic over a period of three years. The strongest research icebreaker – Oden, will travel to the most inaccessible area. 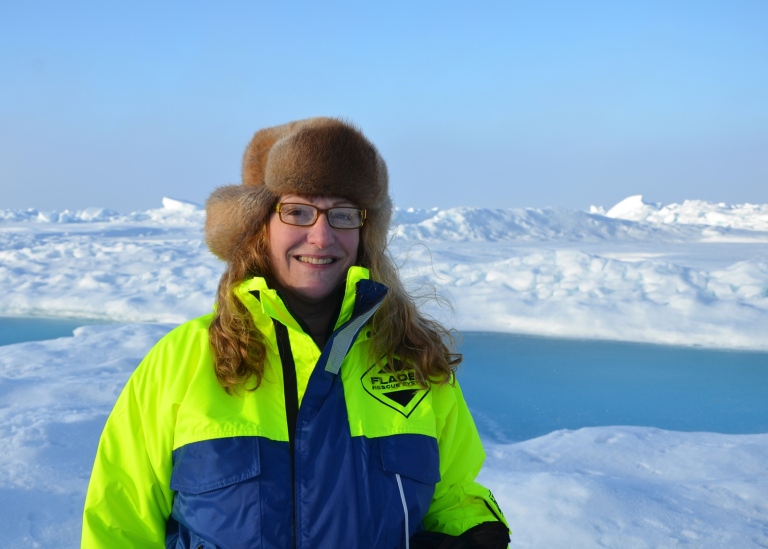 “This is a scientists dream, to reach an unexplored area. A special area that does not exist anywhere else,” says Pauline Snoeijs Leijonmalm Professor of Marine Ecology at Stockholm University and Chief Scientist on board.

The destination is part of the Central Arctic ecosystem, which covers an area of 3.3 million square kilometers around the North Pole. Until recently, the Central Arctic ocean was still covered in ice all year round. Now part of the ice is melting during the summers and, according to forecasts, the last permanent sea ice may soon be gone. 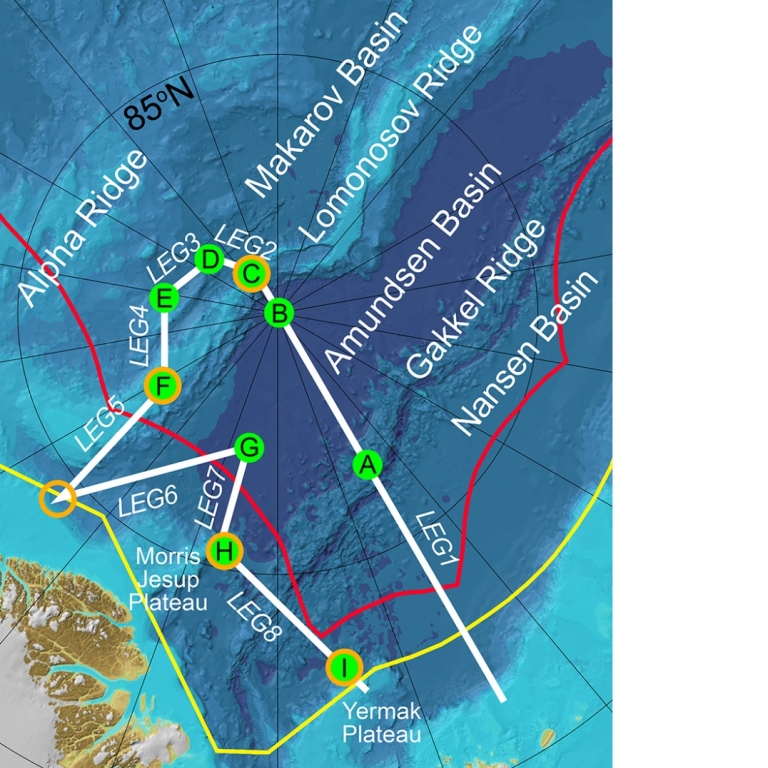 The expedition with Oden will cover about one-tenth of this area, between the North Pole and Greenland. The goal is to understand the ecosystem itself, but also how it changes. In this area, researchers will find both perennial ice and newly formed ice for comparison. The expedition will study the life that exists in the area, an important reference for the future.

“The ice disappears at an enormous speed and it is impossible to stop. When we explore the area for the first time, we lay the foundation for future research. Where we are going, no one has ever taken a sample of chlorophyll or zooplankton. It really is basic science. We are going to the last permanent ice in the Arctic,” says Pauline Snoeijs Leijonmalm.

This may be the last chance to study some of the organisms in the Arctic.

“This ecosystem has been covered by sea ice all year round. If the ice disappears in summer and returns in winter, which we believe will happen within a few decades in the whole Central Arctic Ocean, it will have enormous effects on everything that lives there, from polar bears to microbes. We see that organisms in other parts of the world are moving towards the poles to escape a warmer climate, but in the Arctic it is not possible to move further north. The species that are extremely cold-adapted have nowhere to escape and will eventually disappear from the earth.” 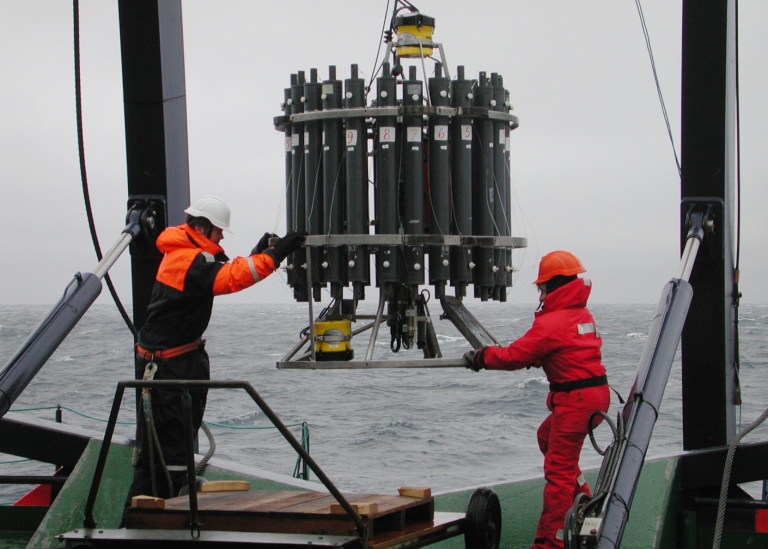 Water samples are taken on board the icebreaker Oden during a previous expedition. 24 bottles have taken water samples at pre-programmed depths down to 4,400 meters. Photo: Pauline Snoeijs Leijonmalm.

The researchers will find out what lives both under the surface and in the ice. For example, they will take chlorophyll samples as a measure of ecosystem productivity, and DNA samples to find out which plankton organisms occur, how many they are and how nutritious they are. With bottom samples at a depth of 1,000–2,000 meters, they will also be able to examine the sediments that functions like an archive for the ecosystem, revealing which organisms lived in the Arctic Ocean thousands of years ago.

The smallest participants in the ecosystem will be explored – the microbes found in water, ice, snow and meltwater. But the researchers will also look for larger animals. At the moment, nobody knows which fish and squid live under the ice. With the help of hydroacoustics, camera systems, vertical trawls and long lines with hooks they will find out. Pauline Snoeijs Leijonmalm also brings a bunch of common fishing rods for deep-sea fishing.

“Everyone on board can borrow a rod and go fishing in their spare time. As much free time as there is, we often work 14-16 hours a day. Every minute in the Arctic counts.”

Pauline Snoeijs Leijonmalm already knows that there are fish near the North Pole from previous measurements with hydroacoustics. But where she is going this time, no such measurements have ever been made, and no one has ever caught a fish there.

I hope and believe that we will find fish, but it will probably be a very small amount. They are scarce but have a very important role in the ecosystem, for example as food for seals.” 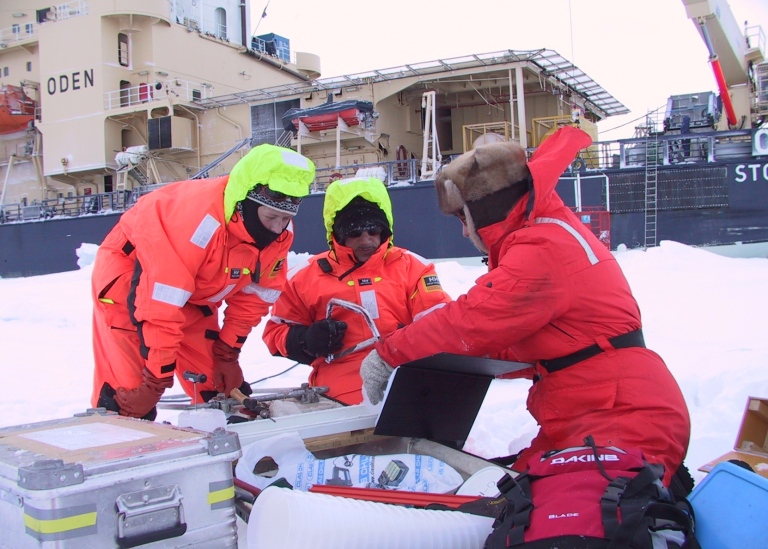 Fram Strait 2002. The researchers measure temperature in an ice core which is divided into 10 cm long pieces that are melted to measure salinity. Pauline Snoeijs Leijonmalm on the far right. Photo: Katarina Abrahamsson

Biology is the main focus of the expedition, but on board there are also researchers from other disciplines. Oceanographers measure how ocean currents move and chemists examine the presence of greenhouse gases. No scientific project on board focuses on mammals and birds, but all observations are documented.

This expedition should have taken place in 2020, but was postponed due to the pandemic. Even now strict precautions are taken and all participants will be isolated in single quarantine for eight days at a hotel in Malmö before departure. The pandemic has also caused other unforeseen problems.

“It turned out that the health care system has bought up the vacuum tubing we need, and lab gloves cannot be ordered either. We have to find other solutions – scrutinize our labs and borrow” says Pauline Snoeijs Leijonmalm.

On July 26, all preparations must be completed when Oden leaves Helsingborg and heads north.

Research project and participants from Stockholm University during the Synoptic Arctic Survey (SAS):